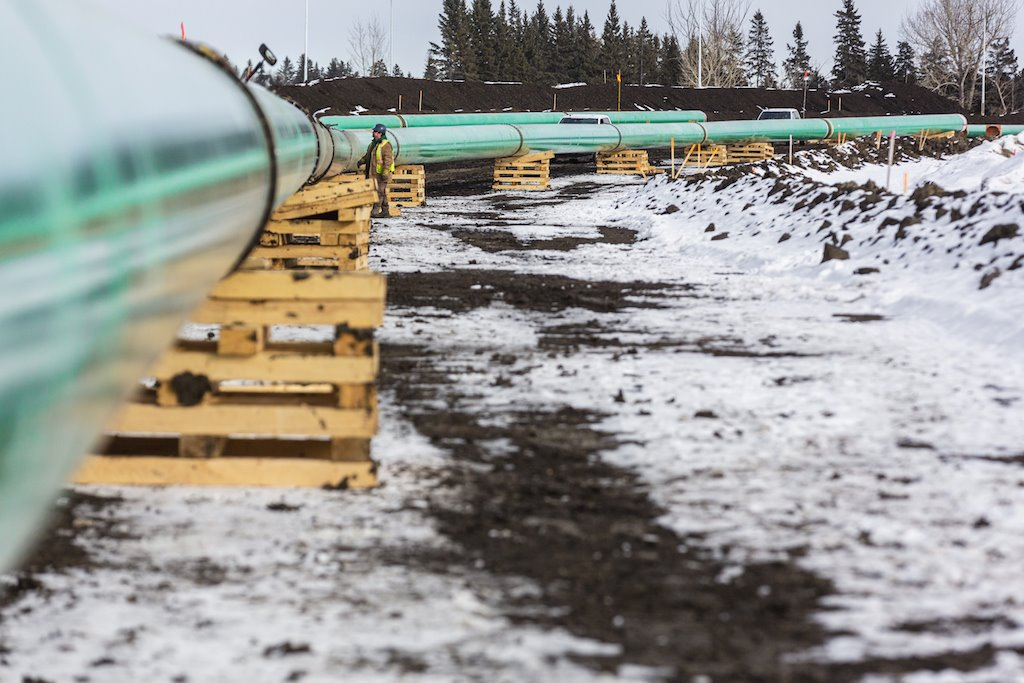 The federal government says it is not its intention to maintain ownership of the Trans Mountain pipeline system for longer than it takes to complete the expansion project. Photo by TMX / Facebook
Previous story
Next story

Canada’s parliamentary budget officer has provoked a fresh round of suspicion about the long-term profitability of the Trans Mountain oil pipeline and expansion project.

The Dec. 8 report by Yves Giroux concludes that the government’s decision in 2018 to purchase and run the pipeline remains a profitable move only if Ottawa doesn’t take further steps to combat climate change, and if the planet maintains its unquenchable thirst for oil.

Both such scenarios are not guaranteed. The government itself has repeatedly said it will make its climate policy more stringent, including by ratcheting up its emissions target for 2030. And everyone from the fossil fuel giant BP to the oil export group OPEC have slashed their long-term oil demand forecasts.

The report caused NDP finance critic Peter Julian to call on Prime Minister Justin Trudeau on Tuesday to “stop rolling the dice on Trans Mountain” and to invest any further funding into “clean energy production.”

The federal government says it is not its intention to maintain ownership of the pipeline system for longer than it takes to complete the expansion project, “and beyond if that is necessary to protect the government’s investment,” as former finance minister Bill Morneau put it in 2018.

The government says it intends to divest from the asset after engagement with Indigenous communities, and that it remains committed to investing any earned dollars into clean energy projects.

Meanwhile, Environment Minister Jonathan Wilkinson has said there are “lots of different forecasts” concerning global energy demand, and that the next two decades will be a period of “transition” away from carbon-polluting fuels.

Giroux's report is an update to one his office published in January 2019, which indicated the government faced a significant risk of having overpaid for the project after shelling out “at the higher end” of its value.

The Trudeau Liberals have tabled legislation, currently at second reading in the House of Commons, to reach net-zero emissions by 2050. Net-zero emissions means that any carbon pollution emitted from burning fossil fuels like coal, oil or natural gas are offset with other initiatives like carbon-capture technology.

Canada’s parliamentary budget officer has provoked a fresh round of suspicion about the long-term profitability of the Trans Mountain oil pipeline and expansion project. #TMX #cdnpoli

As well, Giroux noted that four-fifths of the pipeline’s use has been secured in the form of long-term contracts with energy companies to carry their fossil fuels, with the companies having agreed to pay even if they don’t provide the material for transport.

But, he added, “there is uncertainty around how much of the remaining 20 per cent capacity of the expanded pipeline system will be used.”

The tolls that the pipeline charges energy firms for this remaining space are higher than for the long-term contracts, but there is no requirement for shippers to use it, wrote Giroux.

There is also uncertainty around whether shippers will reapply for more long-term contracts after their existing ones expire.

Canada expects its crude oil production to continue climbing over the next two decades, but it could peak in 2039, according to federal energy regulator projections. In that scenario, the capacity coming from other pipelines would be more than enough to handle future crude oil growth, it said.

“In light of certain scenarios for oil supply in recent energy market projections, there is a risk that shippers will choose to not re-enter into committed contracts in the 2040s,” wrote Giroux.

If energy firms don’t re-enter these contracts, the tolls would change to equal the total cost of providing service, Giroux said — meaning a “less lucrative” outcome for Trans Mountain and a lowered value.

Analysts have also raised concerns about the long-term ability of Canada’s oilpatch to sell its mostly heavy, sulphur-rich crude oil to markets outside the United States, where 98 per cent of Canada’s oil exports are destined.

Finally, there are questions about when exactly the expanded pipeline will open for business, and whether the COVID-19 pandemic will delay the effort.

Giroux pointed out that the Crown corporation that owns and operates the pipeline has indicated in company reports that the pandemic “may increase certain risks related to development of the expansion project schedule.”

This past fall, sworn statements to regulators and construction plans appeared to indicate that Trans Mountain missed a key window for work near waterways to begin this year, meaning that construction could be delayed by two months or more.

The company has remained steadfast in its position, as it said again last month, that the expansion project’s schedule “remains intact with a planned in-service date of December 2022.”

when in a hole, the first

when in a hole, the first step is to stop digging.

All I have on this project

All I have on this project are questions that leave me with a feeling the Province of Alberta has been failed in many ways. Why buy the pipeline if it could not be built in the first place at such an exorbitant price. If building it was a problem then the price should have been reduced accordingly. Why buy it and then go to Paris and agree to reduce carbon pollution when you knew the extraction of oil in Alberta was creating such pollution. Why negotiate a new nafta agreement with the United States and not get a guaranteed price for Alberta oil relative to the cost of west texas oil. Why then create legislation that goes against oil production in Canada. If there are some easy answers to these questions, I would love to hear them.

Oh, it's the province of

Oh, it's the province of ALBERTA that's been failed? The feds, after you guys shouting at them for years about your precious pipelines, after the private sector walking away from the thing because it was obvious to them it was a money-loser, buy the blasted thing for you so you can shove your bitumen across my province and into my harbour, and it's ALBERTA that's been failed?!
Alberta isn't paying a penny for this thing (well, I suppose in general taxes, so they're paying maybe 10% of the total while the rest of the country ponies up for most of it), and Alberta isn't going to deal with the spills. That latter would be British Columbia, that place you guys always conveniently forget exists to the West of you when you talk about "The West". British Columbia is bearing the risks and getting nothing for it, Vancouver is the place where giant tankers are going to be squeezing through waterways too small for them. I think if anyone's been failed in this, it ain't Alberta which has been coddled like bad parents coddling a kid having a tantrum. You guys are getting given stuff that's bad for you because you screamed and screamed until you got it.
It's British Columbia that's been failed.

"Net-zero emissions means that any carbon pollution emitted from burning fossil fuels like coal, oil or natural gas are offset with other initiatives like carbon-capture technology."
*
Current carbon-capture technology captures emissions from large point-sources such as refineries/upgraders and coal-fired power plants. This limits additional emissions, but does nothing to remove existing CO2 from the atmosphere. The kind of carbon-capture technology required to achieve net-zero emissions.
Such technology does not exist yet, certainly not at scale.
*
The Govt of Canada is betting on technology yet to be invented. To avoid the politically more difficult measures that would prevent the emissions in the first place. Hence, Canada's investment in new export pipelines that put our sadly inadequate emissions targets further out of reach.
This story does not end well.

Why triple the capacity of

Why triple the capacity of the Trans Mountain Pipeline when the following is the history?
The Westridge terminal can easily load one hundred Aframax tankers (about 600,000 barrels of oil each), a year, or 25 every three months.  It's rare for the terminal to exceed 50% of its loading capacity and in 2016 and 2017 it used less than 15%.  Since 2014, there have been 178 tankers loaded at Westridge; 144 of them went to the USA (most to California), 29 went to China, 3 went to South Korea, 1 went to India and 1 went to New Brunswick.  This is far less, under 30%, of the tankers that could have been loaded. If a higher price were available in Asia as is claimed, all the tankers would have gone there.  Clearly a higher price is not available in Asia.     After 7, April this year no tankers went to the USA until 23, Sept.  In this gap there was a rush of eight tankers to China associated with the general oil price collapse.  After them a single tanker went on 20, June to New Brunswick, over five months ago, in an attempt to develop a market there.
Highlights are: No tankers loaded in August. One small tanker loaded in September.
There was a five month absence of tankers going to California, from April to September.
There was a three month absence of tankers going anywhere between June and September.
This information is courtesy of Dave Huntley via me.  TMX is Still a BAD IDEA.
oh oh . . . The Big Reset includes TMX, Site-C, LNG, & these projects reduce the rioting in the streets.