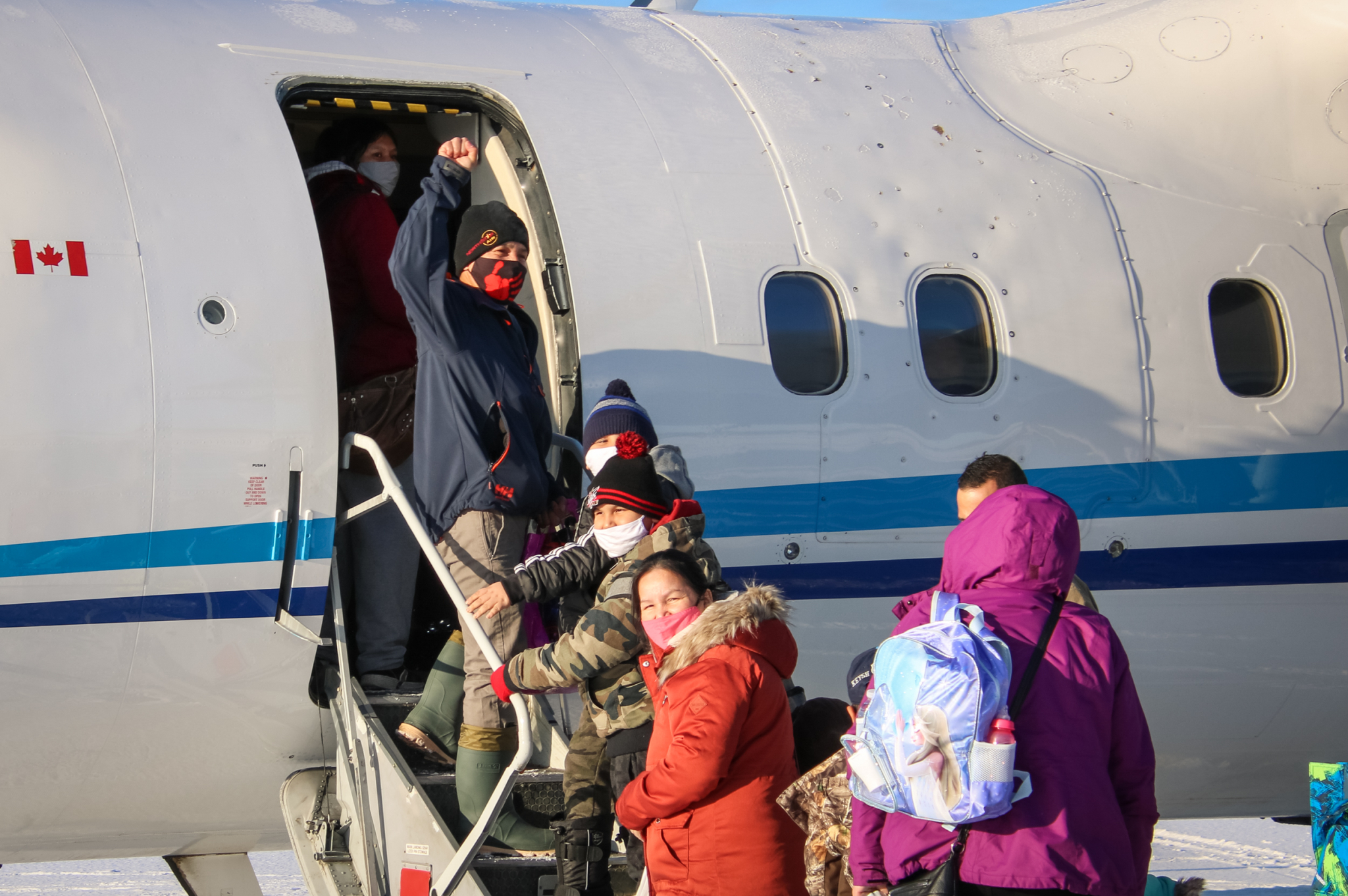 Neskantaga First Nation residents board a plane to return home from Thunder Bay, Ont., on Dec. 19, 2020, following a two-month evacuation that was triggered by problems at their drinking water treatment plant. Olivia Stefanovich/Media pool photo
Previous story
Next story

Although the federal government is making progress in improving drinking water in some First Nations communities, a number are only getting temporary solutions to their water issues that may leave them with unsafe water in the years to come, says a new audit released on Thursday.

The report, tabled in Parliament by federal auditor general Karen Hogan, states that in some cases, Indigenous Services Canada provided temporary measures to lift long-term advisories, but long-term solutions to address underlying issues with water systems were not being fully implemented and will take years to be complete.

In an interview, Hogan said implementing interim measures “just takes the problem and pushes it further down the road” rather than finding long-term solutions.

“It isn't just about lifting an advisory, but about finding the root cause and in making sure that the solutions that are put in place are sustainable into the future,” Hogan said.

Of the 100 long-term advisories eliminated, 15 per cent were lifted due to interim measures, such as repairs to water infrastructure. Of the 15 per cent, no long-term solutions have been implemented on any of the water systems.

The auditor general says Indigenous Services Canada has failed to meet its commitment to eliminate all long-term drinking water advisories on First Nations reserves by March 2021 and needs to do more to prevent new ones from occurring.

The audit takes stock of the shortfalls of the government's strategy to solve the water crisis: temporary fixes, outdated policies and funding formulas, and no regulations to set standards for drinking water systems on First Nations.

“Indigenous Services Canada must work in partnership with First Nations to develop and implement a lasting solution for safe drinking water in First Nations communities,” Hogan said in a press release.

Late last year, Indigenous Services Minister Marc Miller acknowledged the government would not meet the March 2021 goal — a key election promise of Prime Minister Justin Trudeau in 2015. The new projected date is September 2021, according to the report.

When Trudeau took office in 2015, there were 160 long-term drinking water advisories in First Nations communities. The report states that as of Nov. 1, 2020, 100 long-term advisories had been lifted.

But of the remaining 60 advisories, almost half had been in place for more than a decade.

The report also pointed to another worrying sign: once long-term advisories were lifted, several communities came back under another long-term advisory, meaning the new advisory lasted over a year. Between 2015 and 2020, the auditor found five communities that had experienced this.

Despite professed progress by the federal government on addressing the water crisis, the report found the condition of water systems in First Nations communities had not improved between 2015 and 2019, as many remained high- or medium-risk according to the government’s annual assessments.

“Those ratings not changing is an indication that the long-term solutions to fix the problems with the water system haven't been put in place and that it really is just temporary measures that are being used,” Hogan said in an interview.

Since 2015, the federal government has spent more than $1.79 billion on First Nations water and wastewater projects, including funding to operate and maintain water systems, and $1.5 billion in additional funding was announced late last year.

Indigenous Services Canada has partially blamed its failure to meet the March 2021 target on the coronavirus pandemic causing delays in work being done on water systems, though the auditor general says that is not the case.

“We found that in many cases, water system projects were already experiencing delays prior to the start of the pandemic,” Hogan wrote in the report.

The audit also found that outdated policy and the formula for funding the operation and maintenance of water systems has hindered progress. The formula, designed 30 years ago, is used to assess the costs of the day-to-day functioning of water systems, such as water operators' salaries and water treatment plant chemicals, as well as maintenance of the overall system.

Under the current system, the department funds only 80 per cent of these costs, while the remaining 20 per cent falls to the First Nation.

The report states that due to the outdated policy, Indigenous Services Canada “did not provide the full 80 per cent of costs required” and that “First Nations struggled to provide the remaining 20 percent” of costs, resulting in a chronic underfunding of operations and maintenance. This can impact water quality in various ways — low salaries have made it difficult for First Nations to retain qualified operators, and lack of funds can mean preventive maintenance on water systems isn’t being done, shortening the lifespan of infrastructure.

This follows a year-long joint investigation by a consortium of universities and media organizations, including Global News, APTN News, Canada’s National Observer and the Institute for Investigative Journalism, that revealed restrictive and outdated federal policies have resulted in a lack of local control over projects and infrastructure, causing communities to endure conditions rarely found in non-Indigenous communities.

The auditor general’s report echoes many of the issues found in interviews with 122 water operators conducted for this investigation, such as a salary gap and retention issues.

About half of workers reported they were managing at least one ongoing problem. This could include having contaminants in their water supply or operating a system without backup power. All of these issues could affect the quality of drinking water but are not necessarily captured by the government’s tracking of long-term boil water advisories.

Two-thirds of operators surveyed reported earning less than the median wage of all operators in their province — sometimes close to minimum wage — while being on call around the clock with no one to replace them.

This is an issue that Indigenous Services Canada has known about for some time. A 2005 audit recommended the department develop a regulatory regime. The Safe Drinking Water for First Nations Act came into force in 2013, allowing for the development of regulations, but none were ever made.

A 2018 document leaked to the consortium also confirms the department was aware years ago that “lack of compliance to building codes, legislative frameworks, reporting requirements, etc.” were policy gaps affecting the delivery of safe drinking water.

“I am disheartened and saddened that here we are in Canada in 2021 and there are so many members of First Nations communities that do not have access to safe drinking water. It is a basic human necessity, and everyone should expect it, most of us take it for granted.”

Hogan said she was disappointed so little progress had been made on this file over the years.

“My predecessors … have for decades been talking about how the government isn’t doing enough to support and meet the needs of First Nations, and it’s sad in one of my first reports that I have the same finding.”

— With files from Annie Burns-Pieper, Patti Sonntag and Elizabeth McSheffrey

See the full list of “Broken Promises” series credits and more information about the consortium on the Clean Water, Broken Promises website.