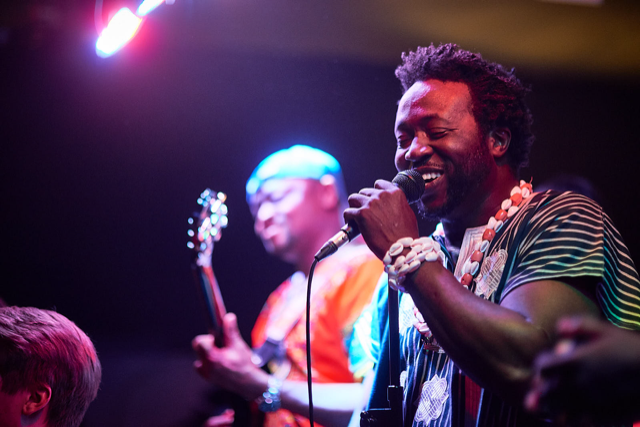 Getting sick from dried African veggies made Toyin Kayo-Ajayi think about how he could get his hands on fresh Nigerian produce in British Columbia.

He says the dried stuff isn’t bad, but that it’s nowhere near the same. Plus, he says, there’s so much potential to grow it in B.C.

“I got sick ... and I was like, ‘OK, you know what? Maybe we should have a farm here in Canada that grows some of our tropical vegetables. We can grow it in an organic way,'” he said.

“When I would have a kid here, they would actually never have that experience of what they would get back home, so I’m going to try and bring it alive.”

A hunter and a farmer all his life, Kayo-Ajayi says the skills and attitudes he developed as a child have informed his latest venture — the Africa Village Retreat. He’s the founder and president of Kara-Kata Afrobeat Society, a Vancouver-based non-profit that connects people through music, art, culture and food. The retreat, outside Mission, B.C., will host an organic farm where Kayo-Ajayi and his team will grow African vegetables and practise sustainable farming.

To put it simply, it has long been Kayo-Ajayi’s dream to grow and share Nigerian vegetables in Canada. He purchased the property in November 2019 and has been working to get it finished ever since. Last summer, they grew their first round of vegetables, which included some successful amaranth, a reddish-purple plant that is grown for its starchy seeds.

“It has always been what I wanted to do,” he said. “I’m all about people smiling, hanging out, eating together.”

Kayo-Ajayi has been involved in a farm in Nigeria since 2004, a project he now sees intersecting with what he’s doing in Canada. He grew up in the country, hunting with his grandfather; catching snakes. When he left, it was always his intention to work with people back home to grow food.

Over the years, he has worked to expand the initiative by gradually buying more farmland for people in Nigeria. The society recently purchased 50 acres of land in Igbara-Odo, Ekiti, where bamboo and palm oil crops have been flourishing.

“I work, I just keep buying the land, because I realized that, coming from a very poor background, that it’s what my people need. They need to be able to sustain themselves in a natural and organic way,” he said.

Kayo-Ajayi moved to Canada in 2001 to play professional soccer, but he soon switched gears and began by working on a dairy farm, which he did for over 10 years with the intention of sharing what he learned through the 50 Acres Plus Project.

“So, I’ve learned a lot, I love knowledge ... and I said, if I ever get the opportunity to go to the Western world to see how they do their mechanized farming, I will go into that, so I have something to take back home,” he said.

Food and farming isn’t all the Kara-Kata Afrobeat Society does — as the name suggests, a big part of the group is playing music. The society hosts an annual event in honour of Nigerian musician Fela Kuti, and plays at numerous festivals and events.

The society came together slowly and naturally, says Kayo-Ajayi. While busking at Kits Beach and other areas around Vancouver, he began to make connections with musicians and people in the city. Eventually, it turned into monthly jams where he would cook a big Nigerian meal. It’s the same sentiment he hopes to bring to the Africa Village Retreat — one rooted in music, food and togetherness.

It’s expected to take five years or so for the retreat to be finished, but Kayo-Ajayi says it could happen much quicker depending on funding. Eventually, it’ll include yurts and other spaces for people to stay on the property. The society will host its own events with music, food and gardening. The space will also be available for other people and organizations.

“It’s the African way. Music is life. Music is food. Food is life. Life is food,” he said.

Toyin Kayo-Ajayi said he’d love to hear from anyone interested in getting involved via the society's website.

How the Comox Valley overhauled its food security approach in 2020

I hope he doesn't think

I hope he doesn't think "mechanized farming" methods -- monocrops and the like -- will improve things anywhere. Might be a step backwards in terms of nutrition and sustainability.