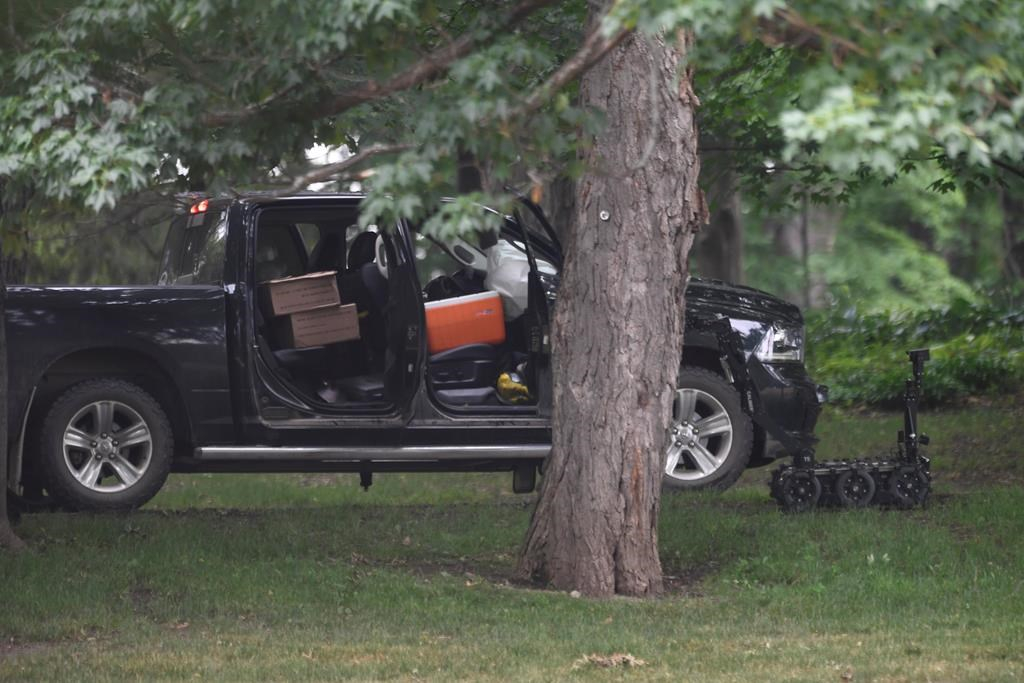 A police robot is shown near a pickup truck inside the grounds of Rideau Hall in Ottawa on Thursday, July 2, 2020. THE CANADIAN PRESS/Adrian Wyld
Previous story
Next story

OTTAWA — A Manitoba man who rammed a gate at Rideau Hall before arming himself and heading on foot toward Prime Minister Justin Trudeau's home last July was sentenced Wednesday to six years in prison.

Corey Hurren, a 46-year-old sausage-maker who served with the military's Canadian Rangers, was given one year of credit for time spent in custody, meaning he still faces five years behind bars.

He will also be prohibited from possessing any firearms, ammunition or explosive substances for life.

Hurren had initially faced 21 weapons charges and one of threatening the prime minister.

He pleaded guilty last month to seven weapons charges related to possession of prohibited or restricted firearms "for a purpose contrary to the public peace" and one charge of mischief by wilfully causing $100,000 worth of damage to the Rideau Hall gate.

In delivering the sentence, Ontario Court Justice Robert Wadden said Hurren had not expressed remorse for his actions.

"This was an armed aggression against the government, which must be denounced in the strongest terms."

There was a risk that Hurren's guns could be used to cause serious bodily harm or death, Wadden said.

"The deliberateness of Mr. Hurren's actions and his intentional use of loaded weapons to make a political statement bring him a long way from a usual first offender caught with a single gun.

A Manitoba man who rammed a gate at Rideau Hall before arming himself and heading on foot toward Prime Minister Justin Trudeau's home last July was sentenced Wednesday to six years in prison.

Hurren drove a truck onto the grounds of the Governor General's official residence last July 2 and rammed through the gate, which caused the vehicle to stall and its airbags to deploy.

He then set out on foot toward Rideau Cottage, where Trudeau and his family are living due to unresolved questions about costly repairs needed at the prime minister's traditional official residence at 24 Sussex Drive nearby. Trudeau was not home at the time.

Police were able to talk Hurren down and arrested him peacefully after about 90 minutes.

He was initially accused of uttering a threat to "cause death or bodily harm" to Trudeau.

But according to an agreed statement of facts read in court on Feb. 5, Hurren told police he didn't intend to hurt anyone, and that he wanted to arrest Trudeau to make a statement about the government's COVID-19 restrictions and its ban on assault-style firearms.

He said he had hoped to make the arrest during Trudeau's daily pandemic briefing outside Rideau Cottage.

Hurren, who told police he hadn't qualified for emergency aid benefits, was angry about losing his business and his guns. He believed Canada was turning into a communist state.

Hurren also told police at the scene that he wanted to show Trudeau "how angry everyone was about the gun ban and the COVID-19 restrictions" and said the prime minister "is a communist who is above the law and corrupt."

Data retrieved from his cellphone, Facebook and Instagram posts included exchanges with friends about "conspiracy theories related to the Canadian government," as well as a "sacrifice theory" related to the date of the mass shooting in Nova Scotia last April and suggestions that COVID-19 is a hoax.

Police seized five firearms from Hurren at Rideau Hall, including a restricted revolver, a prohibited pistol, a prohibited rifle, two shotguns and a prohibited high-capacity magazine. Eleven more long guns were seized from his Manitoba residence.

Hurren's lawyer, Michael Davies, said during a hearing last month his client made a series of bad decisions and one correct one — to put the guns down.

Davies had sought a sentence of three years for his client, describing him as a hardworking member of society who suffered financial difficulties during the COVID-19 pandemic that put him into a state of depression.

Davies said Hurren was already facing fallout from his actions besides the prospect of several years in jail, including the start of divorce proceedings by his wife and the military's move to permanently discharge him from the Rangers.

Crown prosecutor Meaghan Cunningham told the court in February that Hurren's actions "were far from benign," and posed a serious threat to public safety while setting up a potentially dangerous situation.

"The RCMP officers involved were able to de-escalate the situation and eventually arrest Mr. Hurren without any shots being fired," Cunningham said.

"But that doesn't change the fact that Mr. Hurren's deliberate actions on July 2 were incredibly dangerous. They created a risk of harm or death to anyone that might have been caught up in what he had planned."

Wadden said Wednesday the fact Hurren knew his actions last July were potentially suicidal raises serious concerns about his future behaviour if the underlying depression is not acknowledged and treated.

Although he was depressed at the time of the offences, what spurred Hurren to act were his political views, including conspiracy theories, Wadden added.

"There is no evidence that he has renounced the conspiracy theories, or that he has recognized the wrongfulness of using armed force to express his political views."