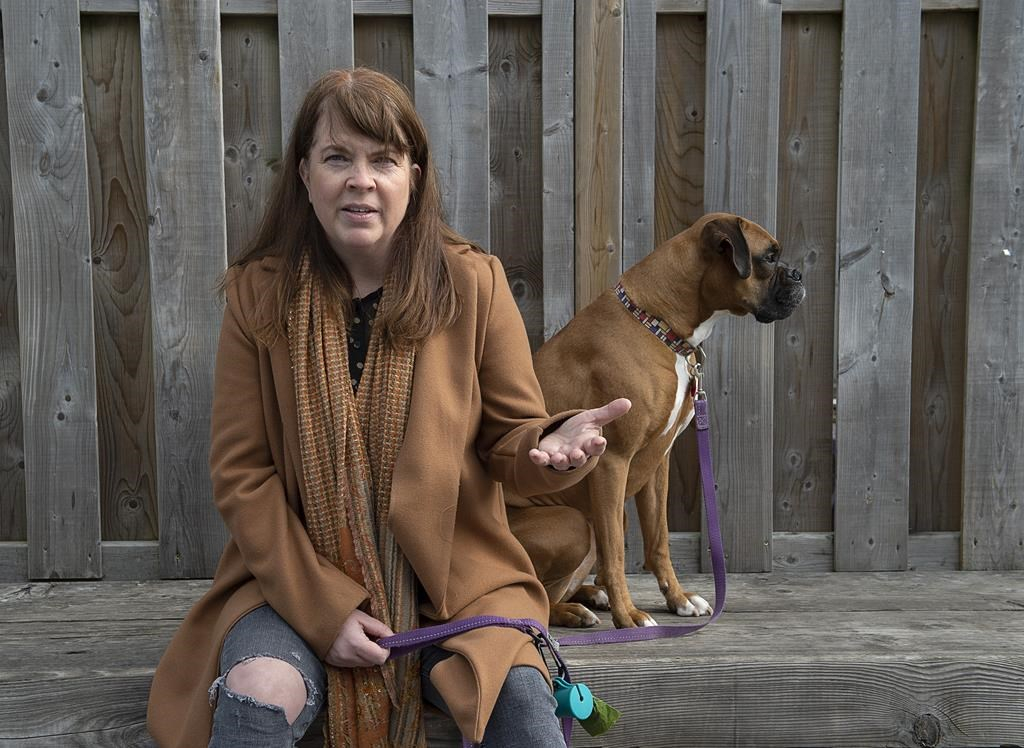 Laura MacLeod, owner of the now shuttered cafe, The Old Apothecary, accompanied by her dog Caramel, reflects on the closing of her business caused by the impacts of the COVID-19 pandemic in Halifax on Mar. 11, 2021. Photo by The Canadian Press
Previous story
Next story

Atlantic Canada's political leaders have touted the region as an example to the world after the novel coronavirus was repeatedly beaten back by a population that dutifully followed orders to isolate and physically distance.

Yet, a year after the first cases, the side-effects of declining mental health and damaged livelihoods remain costs that some psychologists and entrepreneurs say haven't been fully recognized. And as residents reflect on the year past, their reactions vary from pride to sadness, as they recall both lives saved and the lasting damage many have endured.

"We've learned through this that Atlantic Canadians tend to respect authority and government a lot more than other regions," said Donald Savoie, author of multiple books on the East Coast's economy and politics.

In a recent interview, the public administration scholar tied low COVID-19 case numbers to the demographics of an older and more rural population that's obedient to authority. "Maritimers simply took public health directives as gospel," he said, referring to orders to shutter churches and businesses, and — as former Nova Scotia premier Stephen McNeil put it — "Stay the blazes home."

Savoie recalled former prime minister Stephen Harper's 2002 comment that the region possessed a "defeatist" culture due to dependence on the public sector; during the pandemic, Savoie said, the supposed weakness became a virtue.

David Chaundy, president of the Atlantic Provinces Economic Council, says that while the region's economy suffered, "when we look at economic indicators for 2020, Atlantic Canada has fared slightly better than Canada on several indicators." For example, he cites the East Coast decline in employment of 4.1 per cent, compared to an average of 5.1 per cent across the country.

Her 78-year-old father narrowly survived the disease in a long-term care home, and she recognizes that public health directives were necessary. However, her cafe The Old Apothecary — where residents used to mingle amid the aromas of coffee and fresh pastries — is now shuttered, defeated by the emptying of the city's downtown.

Having retrained from interior design to become a chef, the 50-year-old's dreams started to derail after the first cases in Nova Scotia were announced in mid-March last year. "It was a gut check. Everything was going so well, and to have it all fall apart so quickly was heartbreaking," she said in an interview.

"If you said anything against the heavy regulation, you're pounced on," she added. "So instead, everyone would internalize everything, and people would say 'I'm fine.' But they're not fine." Since her cafe's closure, she's heard of the growing despair of many restaurant owners, and she wants health advocates to know "people are in trouble, mentally."

Mental health treatment in Nova Scotia already lagged behind rising demand, and then the pandemic led the province to prescribe "isolation and avoidance," according to Simon Sherry, a professor in Dalhousie University's department of psychology.

#AtlanticCanada has managed the pandemic well, but at heavy cost to mental health. #COVID19

He points to Canadian Institute for Health Information data that indicates that while overall spending on mental illnesses nationally rose 25 per cent between 2009 and 2018, in Nova Scotia, it went up just 12 per cent in the same period.

"The province is experiencing a public health disaster masquerading as a success story," said Sherry, adding that more attention should be paid to the consequences.

"We're separating workers from employment in workplaces, children from school and sports and recreation, family from each other, and this is massively compromising the mental health of Nova Scotians," he said in an interview.

Food and shelter insecurity often made the situation more acute across the region.

Joshua Smee of Food First NL, which assists food banks in Newfoundland and Labrador, said a survey of 60 food supply organizations last April indicated a 52 per cent increase in the number of clients compared with a year earlier.

Herbert Emberley, a 49-year-old single father in St. John's, N.L., said in an interview his job opportunities evaporated and he was worried about having enough food for him and his nine-year-old daughter. "When the first lockdowns came, I felt really freaked out," recalled the former cook, who has been unable to work in his old profession due to back problems.

His blood pressure and anxiety were rising as he scraped by on welfare. He depended on deliveries from a food bank and sought help from Stella's Circle, a St. John's program that assists citizens with housing, counselling and employment services.

The program provided him with relaxation training to calm his mind, and a "transitions to work" program that has him once again applying for jobs.

"Newfoundlanders are outgoing and friendly, and to be isolated from everybody is not what we're programmed to do," he said.

The pandemic has forced some care providers to be creative. Matthew White, program leader for the acute care crisis support in Nova Scotia Health's central zone, said resources were shifted from traditional in-person counselling to online and telephone support to meet demands for help.

Calls to the mental health crisis line were up by more than a third in the fall compared to the same period a year earlier, as clients shifted to phones, White said.

Despite the pressures, he said he and his staff were impressed by the inner strength of many clients. "They've had challenges in their lives, but they're here, reaching out for support, and their resilience is unbelievable," he said.

Still, MacLeod, the Halifax chef, worries about the future. She is hoping that, as subsidies and assistance dry up, her colleagues in the restaurant business don't meet a fate similar to hers. And in St. John's, Emberley calls for a tempering of rhetoric about the Atlantic success story as people pick up the pieces.

"You have to do what you got to do, because you have to prevent people passing away," he said. "But we should have helped everybody else more with their mental health."