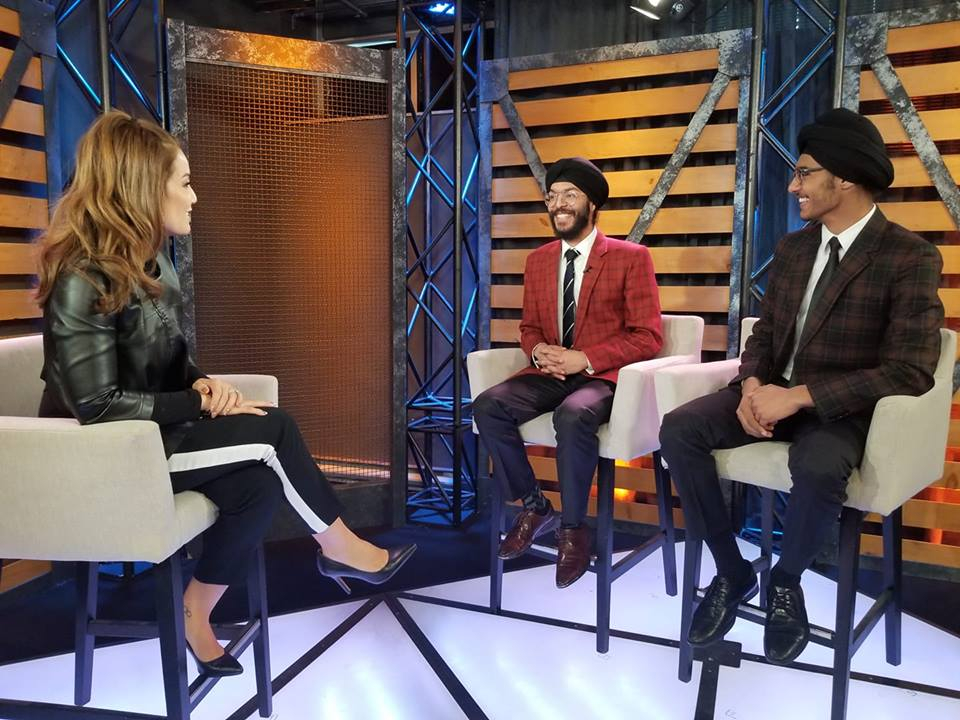 Abhayjeet and Sukhmeet Sachal on CTV’s The Social talking about the work of Break The Divide with Melissa Grelo in 2018. Photo submitted by Abhayjeet Singh Sachal
Previous story
Next story

As part of a series highlighting the work of young people in addressing the climate crisis, writer Patricia Lane interviews Abhayjeet Singh Sachal, co-founder of Break The Divide, a group that connects young people and encourages them to develop empathy.

Abhayjeet Singh Sachal co-founded Break The Divide in 2016 when he was only 14. Since then,1,000 students in 20 schools from eight countries have gotten involved, forming meaningful connections that protect their mental health while they take climate action.

He has a $100,000 scholarship to attend the University of Toronto's global health, peace, conflict and justice program, where he is researching pre-traumatic stress and the mental health impacts of climate change in young people. He is also investigating the health impacts of economic insecurity and climate change in Southeast Asia and using community knowledge to harvest invasive weed species for biofuel in Cambodia.

In 2017, he was named one of Starfish Canada’s Top 25 Environmentalists under 25. In 2019, he was Canada’s Walk of Fame Community Hero and Canada’s Excellence in Environmental Education and Communication Outstanding Youth Leader.

How did you come to found Break The Divide?

In 2016, on a trip with Students On Ice, I made friends with some Arctic youth who talked about the terrible toll climate change and economic insecurity has on them. One profound moment for me was when we stopped by a glacier and I could see and hear the ice melting. But what really galvanized me was my friends sharing that the melting permafrost is causing their houses to break. I wanted to help others form friendships, so they too would be moved to change our world.

Tell us what it is.

Essentially, it allows for global pen pals. As students learn about the impact of climate change on new friends, it becomes personal. That motivates young people to push for change in their own communities; initiatives such as local energy audits, stream cleanups, or setting up mental health support groups. One of my ninth grade friends told me he learned more about Canada, reconciliation and climate change from a two-hour conversation with a young Arctic student than in all his previous social studies classes. He said having a friend to share how they felt about the state of the world helped him feel less alone. In Bolivia, students are sharing what they are doing to implement public health measures in light of COVID and inspiring us all.

Why are school counsellors in Canada excited about this idea?

Climate change and economic and racial inequality can seem overwhelming. Break The Divide turns apathy to empathy, which leads to action.

Who helped to found Break The Divide?

My older brother Sukhmeet helped with our first pairing, connecting my high school and one in the Northwest Territories. Andrea Phillips lives in the Arctic, and she became my friend and a third co-founder.

How has the way you were raised had an impact?

My parents emigrated from India when I was a baby to make a better life for us. My dad would take me for walks in beautiful parks and showed me how to enjoy the rain.

I learned to use my difference to build a connection. My brother was bullied in school, as were Indigenous kids, so he connected with them. He showed me how to build meaningful relationships to make a better world even though he was only seven. In pee wee hockey, I had to take off my turban to put on my helmet. Some of the boys ridiculed me for my long hair. I decided I would just be straight with them. I explained that in my religion, long hair is a symbol of loyalty, unity and strength to care for others. The teasing stopped. I respected them for listening to me, and they respected me for explaining clearly.

As a practising Sikh, "seva," which means selfless service, has been instilled in me since I was very young. It helps me remain optimistic and keeps me working hard

Last September, I had a couple of days when I felt helpless and vulnerable. University was online. I felt pretty isolated. The fires in California gave us in Metro Vancouver the worst air quality in the world and I couldn't even go outside for a run. But Break The Divide reminded me about all the wonderful people all over the world doing extraordinary things.

Be optimistic. Start a Break The Divide group with two or three friends. Talk about how climate change is impacting you. COVID-19 is a good place to start. We will help you get to know two or three young people somewhere else in Canada or another country. Once you make friends by sharing your favourite Netflix movies or sports or video game, you will be able to share your feelings about how climate is affecting you. From there, you can talk about how to make a difference and create a plan to turn empathy into action.

What would you say to older people?

Break The Divide is not just an organization, it's an idea you can adopt. We can use our shared concerns to build unity and avoid social divides. Support young people who want to do this.