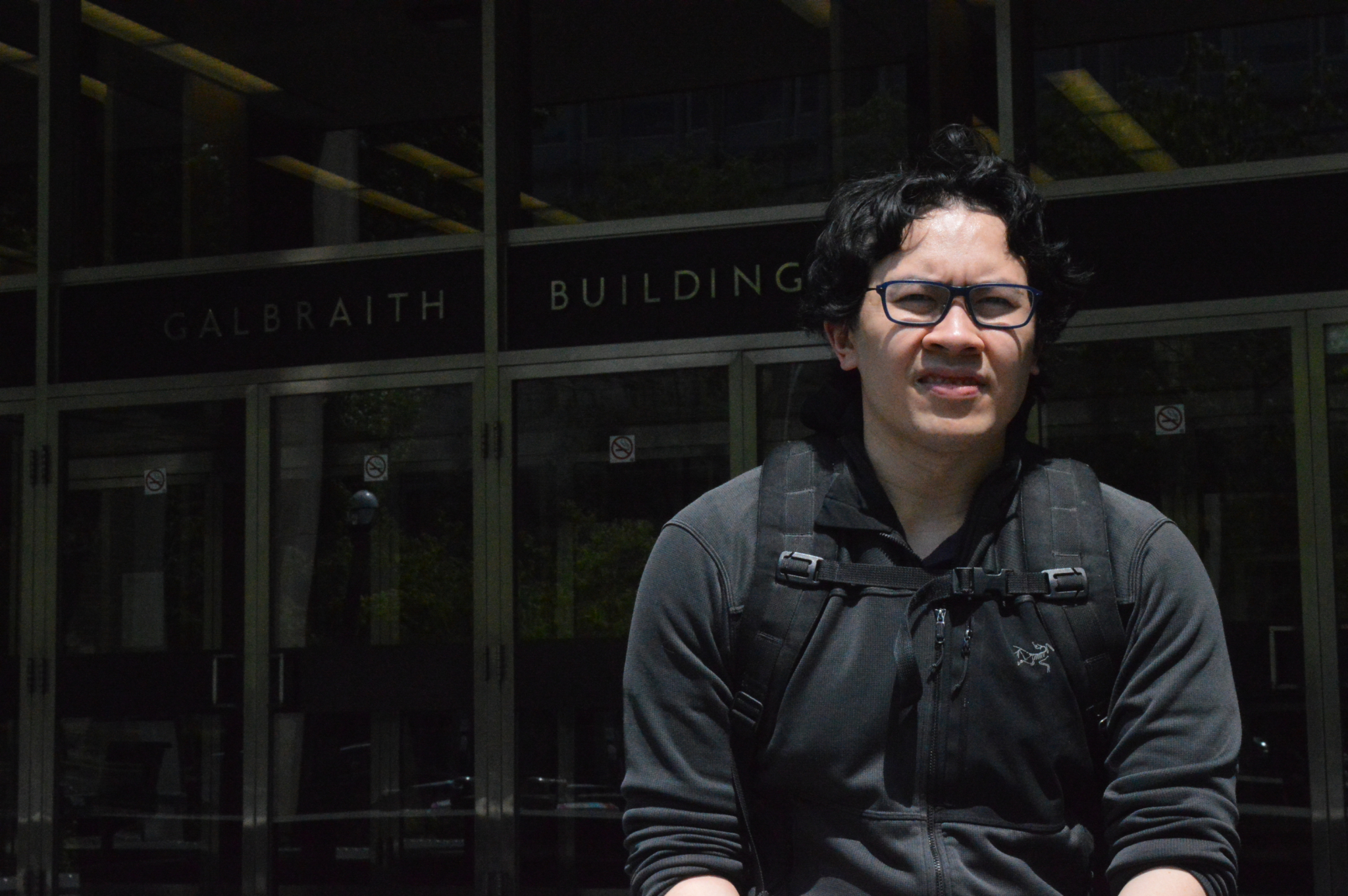 In a written complaint to the Ontario Human Rights Tribunal, Christian Roman alleges U of T "bungled" his academic accommodations, resulting in negative impacts on his career and well-being. Photo by Charlie Buckley / Investigative Journalism Bureau
Previous story
Next story

WARNING: This story contains sensitive subject matter, including suicide and self-harm, that could be triggering for some readers.

While his classmates at the University of Toronto were preparing for fall exams in 2014, Christian Roman was preparing to end his life.

Living with mental illness, physical pain and an elaborate blend of psychiatric medications, the 20-year-old engineering student was spiralling.

One afternoon that November, he told his U of T psychiatrist he was having suicidal thoughts and had stopped himself from taking his own life earlier that day.

“I (had) made a promise to tell him if I was going to kill myself,” Roman said in an interview.

After discussing his worsening symptoms and mounting stress, Roman’s counsellor applied for a psychiatric assessment, triggering a transfer to the nearby Centre for Addiction and Mental Health (CAMH).

Roman says he understood the assessment meant a stay at the hospital, but he didn’t know for how long — nor what he would have to go through to get there.

Campus security soon arrived, handcuffed Roman and, in front of a crowd, escorted him to a vehicle.

“I felt betrayed, just being put in those handcuffs,” Roman remembers.

In allegations filed in a formal complaint to the Human Rights Tribunal of Ontario, Roman, now 26 and originally from Florida, describes his more than six years at U of T as a gradual descent into depression, poverty, homelessness, multiple suicide attempts, threats of deportation back to the United States and, ultimately, expulsion.

Post-secondary institutions are being pushed to balance traditional educational missions and standards with growing student mental health-care needs, according to an investigation co-ordinated by @UofT_ijb. #GenerationDistress

“The University of Toronto bungled (Roman’s) accommodation process so badly that it has destroyed his academic career, his finances, and made him sick,” reads the complaint filed last year.

In a response filed with the Human Rights Tribunal, the University of Toronto denies Roman’s allegations and states the school provided him with extensive and extended accommodations, including administrative, medical and academic support for his disabilities during his enrollment.

Despite the university’s efforts to accommodate him, “Mr. Roman did not meet the requisite academic standards to progress through his program of study,” the statement reads.

The statement adds school officials “granted virtually every petition (Roman) filed, garnering him numerous assessed grades, retroactive withdrawal, and permission to re-enroll in the University at least twice after being academically withdrawn.”

This case is among dozens reviewed as part of a year-long investigation into spiking youth mental health demands co-ordinated by the Investigative Journalism Bureau.

They detail increasingly complex disputes between students and their post-secondary institutions over academic standards, differing expectations of mental health care on campus and legal requirements schools must meet to provide reasonable accommodations to the growing numbers of students suffering with challenges.

These disputes are often adversarial and intractable. And the stakes are high. Vulnerable young people facing mental health crises stand to lose careers, financial support, housing and, in cases with international students like Roman, their legal status in Canada.

On the other side, post-secondary administrators and faculty are being pushed to balance traditional educational missions and standards with growing student mental health-care needs. In a statement, U of T said during the last academic year it provided for more than 33,000 mental health counseling appointments and was able to “able to meet 78 per cent of requests for same-day appointments.”

However, the most common post-secondary response to mental health calls for academic help — accommodations offering flexible assignment deadlines and the ability to rewrite exams — can often fall short.

Roman and U of T agree the university approved a string of accommodation applications he sought over his career at the school.

But Roman alleges those accommodations were short-term, reactive and ultimately insufficient to address his core mental health struggles.

“Everything feels like a Band-Aid solution that they just threw together, just to get me out of the door,” Roman says. “And I accepted it.”

Through it all, he claims the real mental health supports he needed never came and that the school’s “failures” created an environment that increases “the likelihood of the very worst outcomes for students, including acute mental health breakdowns, substance abuse, self-harm, and suicide attempts.”

In a written response to reporters, the U of T said the university is a “centre of research-based academic excellence, but we are also a community of people — students, educators, and researchers. The leadership of the university have spent their careers working with students and want to ensure that they are supported and engaged throughout their time at the university.”

The following account of what happened is based on allegations in Roman’s human rights complaint, interviews with him, the University of Toronto’s response to the complaint and responses to questions put to the university.

Roman says after his admission to Centre for Addiction and Mental Health, school administrators visited him, telling him “the university could not help him” and advising him to “drop out if academic life was ‘making him miserable,’” reads Roman’s human rights complaint.

The university, in its written response, says that during the visit, a senior university director suggested a meeting to discuss next steps. Following his hospitalization, staff from the university were “closely involved” with Roman, including creating a plan to support him in completing the semester, it reads.

Roman had himself discharged from centre, believing his stay could lead to course failures, ultimately threatening his student visa and ending his chances of staying at U of T.

“The unfortunate result of the university’s visit to Mr. Roman at (the Centre for Addiction and Mental Health) was that he felt he needed to leave without getting treatment so that he could deal with the bureaucracy of securing accommodations,” the complaint reads. “However, the underlying illness had not been properly treated.”

Jay Dolmage, author of a book on academic accommodations in Canada called Academic Ableism and editor of the Canadian Journal of Disability Studies, says post-secondary students with mental health challenges face dire prospects if they don’t get the help they need on campus, including losing their counseling services, financial aid and housing.

The duty of care to those students can be undermined by a sense of academic “elitism” on university campuses, he says.

In a written statement to reporters, the University of Toronto says the school has invested “considerable thought, time, and resources into developing the best possible supports for our students across the mental health continuum.

“Those investments include accessibility services to provide accommodation and support to students with disabilities, counseling and psychological services and a system allowing students to request exceptions to university rules, regulations or deadlines, based on their personal circumstances.

“We know that we — like any major institution — need to keep improving in this area,” reads the statement to reporters. “We are actively listening to the experiences of our community and responding to their changing needs.”

Prior to the start of Roman’s first semester at U of T in the fall of 2012, he says he suffered a severe injury to his back causing chronic physical pain and mobility issues that began devastating his mental health over his first semester of university.

He received academic accommodations intended to mitigate the effects of missing classes, he says. Despite the accommodations, he struggled and his grades suffered. During his first two years, Roman was failing courses, filing petitions to adjust his grades and on academic probation. He was at risk for expulsion.

By January 2015, things had not improved. Struggling with a full course load, a string of incomplete courses and “significant enduring mental health issues,” Roman was in crisis.

“I still wanted to die, but was afraid to mention it to anyone since I didn’t want to be restrained,” he says.

Because he had failed the previous semester while on academic probation, Roman was barred from readmission. And he says that meant he no longer met the requirements of his student visa to remain in Canada. So he was forced to return to Florida.

With no access to refills for his addictive prescriptions, he says his supply rapidly dwindled and the effects of withdrawal kicked in.

Beyond his bedroom door at home, he says more stressors were waiting for him, including a strained financial situation and a complicated relationship with his family.

Roman says he repeatedly attempted suicide while back in Florida, a period he calls one of the lowest points in his life.

Roman eventually weaned himself off self-medicating narcotics with the goal of returning to his studies. In early 2016, he was readmitted to U of T but unable to secure on-campus housing, his complaint reads. He says he was left homeless for much of the semester, sleeping on friends’ couches, in the library and beneath construction scaffolding on campus.

Roman was officially expelled in May 2018 for what he says was missing exams due to health conditions. He filed a last-chance petition to be readmitted but was unsuccessful.

The university contends that “Roman repeatedly demonstrated he was not capable of academic success even with the extensive accommodations, the university enforced its promotion policy to terminate his registration,” the university’s written statement reads.

Roman’s complaint seeks $300,000 in damages, re-enrolment in the university and an order that his transcript reflect that course failures were due to medical reasons. It also requests the University of Toronto be required to create a “clear, unambiguous, user-friendly route for students needing accommodation or in crisis” and that university staff stop referring to accommodation petitions as “generous” or “extraordinary.”

In its formal response to the tribunal, the U of T denies the allegations and also seeks a dismissal of Roman’s complaint, arguing it was filed beyond the tribunal’s one-year time limit for complaints.

For now, Roman remains in Canada on a visitor’s permit awaiting the outcome of his complaint.

When he visits campus, Roman says the thing that hurts him most is seeing the tour groups of high school students — students who remind him of himself when he began at U of T.

“I don’t care what happens to me. I don’t care if I die or not. I just don’t want this to happen to anyone again.”

If you are thinking of suicide or know someone who is, there is help. Resources are available online at crisisservicescanada.ca or you can connect to the national suicide prevention helpline at 1-833-456-4566, or the Kids Help Phone at 1-800-668-6868.

— With files from Cassandra Dubiel/Ryerson School of Journalism