The fight to end corporate control over the Nechako River 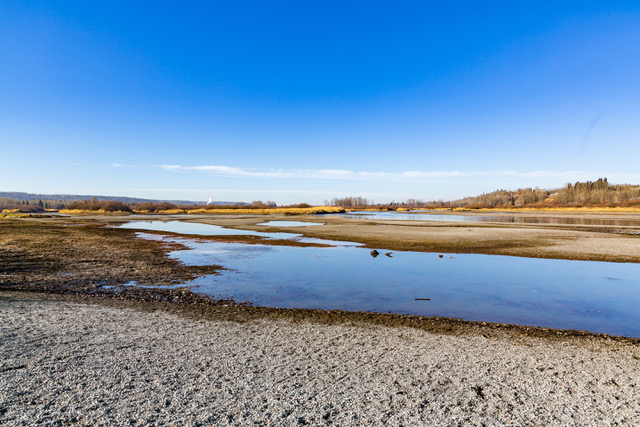 Water levels in the Nechako River have dropped so low, they can no longer support fish. Photo by David Luggi
Previous story
Next story

When he was a child, David Luggi fished the Nechako River for salmon with his family every summer. They would net about 200 fish, which they would dry and can to last them through the next year.

“It was a time of celebration because the community was getting all together and harvesting. It was a great time,” he says. No more.

The Nadleh Whut’en, Saik’uz and Stellat’en First Nations in the Nechako watershed have been unable to hold their traditional salmon fisheries for the past four years, says Luggi, a senior adviser to the nations on the long-running issue and a former chief of the Stellat’en and the Carrier Sekani Tribal Council.

The problem, he says, is high water temperatures caused by low water levels due to the Kenney Dam. The dam diverts, on average, 70 per cent of the Nechako’s flow to the Kemano hydroelectric station that provides power to the Rio Tinto aluminum smelter in Kitimat on B.C.'s northwest coast.

Earlier this month, the Regional District of Bulkley-Nechako passed a resolution acknowledging the infringement of the dam on the Nechako First Nations’ Aboriginal rights and title. The district is urging the provincial and federal governments, as well as Rio Tinto, to give the nations a say in management of the watershed.

Gerry Thiessen, the mayor of Vanderhoof, a municipality of about 5,000 within the district, supported the move.

Like Luggi, Thiessen remembers heading down to the river as a boy with a fishing rod and coming home with more than enough for dinner. Those days are long gone thanks to the dam that diverts most of the water to power the smelter in Kitimat.

“I would grab a willow and a bobber and a worm and go down and fish in the river and come home with trout,” he says. “I can’t remember the last time I saw a child come past my house with a fish they caught.”

Thiessen says the expertise of the First Nations is needed to help restore the river’s health. “They understand it,” he says of the once-lush watershed with headwaters east of the Coast Mountains near Kitimat and a 240-kilometre flow east to meet with the Stuart River and feed the storied Fraser River near Prince George.

The resolution is the latest salvo in a battle the Nechako First Nations and other area communities have been waging for decades.

“I can’t remember the last time I saw a child come past my house with a fish they caught,” says Gerry Thiessen, the mayor of Vanderhoof.

The Kenney Dam and Nechako Reservoir were built in the 1950s. Originally, the hydroelectric power station was to provide power to what was then Alcan’s smelter.

But under an agreement signed with the federal government in 1987 and confirmed in a later water management deal with the province, Alcan (bought by Australia-based Rio Tinto in 2007) can divert water to produce excess power that is then sold to BC Hydro.

The cumulative impact, combined with climate change and the destruction from the mountain pine beetle infestation in the area, has had a devastating effect on endangered white sturgeon, chinook and sockeye salmon, as well as the river overall, Thiessen says.

“I don’t want to argue the science,” he says. “I just know that here on the ground, things have changed.”

Luggi says low water levels in the Nechako cause water temperatures to rise as high as 22 C to 23 C in the summer, devastating the chinook and sockeye that return to spawn in one of the major tributaries to the Fraser River water system.

“The migratory salmon need an ideal temperature of about 18 degrees,” he says. At 20 C, they begin to deteriorate. About 25 per cent don’t make it to their spawning grounds, and those that do are deteriorating from the higher temperature and the beating they take in the low water.

For Nechako white sturgeon, the impact of 70 years of water diversion has been even more severe. They were listed as endangered under the federal Species at Risk Act in 2006.

The dam produces silt that coats the gravel beds where sturgeon spawn. The eggs are not able to hold onto the silt, and populations have plummeted.

What was a population estimated at 6,000 prior to the dam’s construction is now 300. There is a white sturgeon hatchery in Vanderhoof to try to restore the fish, which can live up to 100 years, but it’s not enough, Luggi says.

“These are prehistoric fish that lived through the ice age and the volcanic age here, but they’re no match for the Kenney Dam,” he says.

In September 2011, the Nechako nations launched a court case that is still winding its way through B.C. Supreme Court. Final arguments are expected to wrap by April.

The way the Nechako River is managed is a violation of the Aboriginal rights and title of the Nechako nations, they argue. They want local governance of the water resources in the valley and so does the Regional District of Bulkley-Nechako.

“Right now, water governance is solely at the hands of Rio Tinto-Alcan,” Luggi says. “It’s the only company in Canada that has unfettered governance authority over a river or a waterway.”

A spokesperson for Indigenous Services Canada and Crown-Indigenous Relations and Northern Affairs Canada says operation of the Kenney Dam is primarily under provincial authority, and pointed out the nations have filed a claim in B.C. Supreme Court.

“While the preferred approach to resolving outstanding grievances is through negotiation and dialogue, Canada respects the decision of Saik’uz First Nation and Stellat’en First Nation to pursue their claims through the courts and continues to recognize that Indigenous Peoples are entitled to choose their preferred forum to resolve outstanding issues,” they said in an email response to queries.

A spokesperson for the B.C. Ministry of Indigenous Relations and Reconciliation said it would be inappropriate for the ministry to comment while there is active litigation.

A spokesperson for Rio Tinto says the company recognizes the importance of these issues and “remains committed to an open dialogue” with the nations and the regional district.

The Rio Tinto smelter employs approximately 1,050 people in the area, the company points out.

“Through the Water Engagement Initiative, we welcome a discussion to continue improving the health of the Nechako River and to address collaboratively the many interests represented in the watershed,” Rio Tinto said in an email response to queries.

Thiessen says those discussions have not improved the state of the watershed.

“I think that would be the general consensus, that those discussions certainly haven’t made the type of change that the river requires,” he says.

The communities did not foresee the company being allowed to divert more water in order to generate excess power for sale, he says.

“There’s an opportunity to have, I believe, with local input, local management, an ecosystem that is healthy and that simulates a natural flow and still have the dam operate the smelter,” Thiessen says.

“That’s not a decision made at company headquarters, but it’s a decision of the people who live here along the river and require that asset. They’re the ones that need to have input into that decision.”

The Nadleh Whut’en, Saik’uz and Stellat’en want a say in management of the watershed, in accordance with their Aboriginal rights and title. On the ground, that would mean technicians monitoring the system locally and making recommendations to a local water board. It would not be solely the decision of Rio Tinto.

“Water governance is what we’re looking for because we think 70 years of mismanaging the water has taken a toll on us and the watershed. We’ve paid a high price,” Luggi says.

This story has been corrected to reflect Rio Tinto's smelter produces aluminum.