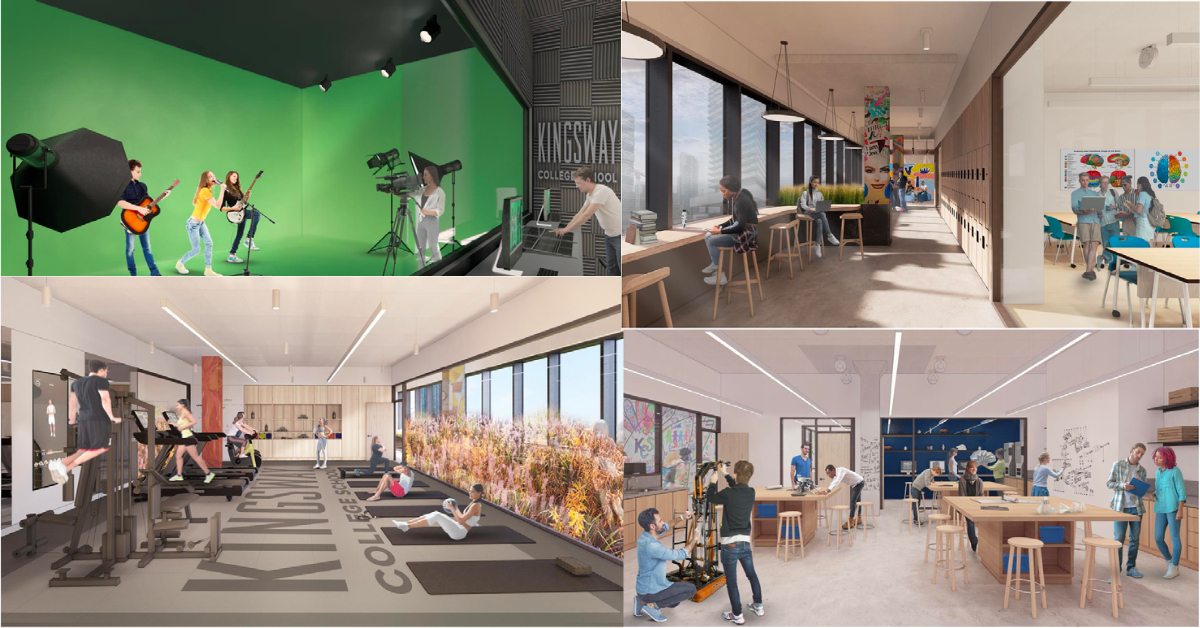 An independent school in Toronto’s west end is raising millions of dollars to construct a Grade 9 to Grade 12 expansion project by issuing community bonds, while public schools in some parts of the city struggle to accommodate population growth.

Kingsway College School in Etobicoke is looking to raise $4 million from the bonds and another $1 million from donations as it prepares a two-storey, 40,000-square-foot space in a condo overlooking Lake Ontario for a September 2022 opening.

While the development’s launch was delayed by a year due to COVID-19, it still stands in stark contrast to the glacial speed at which the public school system in Toronto is able to expand.

Currently, the Toronto District School Board does not qualify for education development charges that would be collected from property developers to help fund new developments because while some neighbourhood schools are overflowing, it has excess capacity overall.

“It breaks my heart to see that some kids and some schools will be able to build bigger, build faster, build nicer because they can use tools that publicly funded schools can't,” said Marit Stiles, the Opposition NDP’s education critic.

“Developers are building condos like crazy and most of them are not paying education development charges and boards here are not seeing a penny of those dollars,” she said.

The new space, about a 12-minute commute from Kingsway’s existing kindergarten to Grade 8 site, features windows on three sides with a café and room for a student marketplace, fitness room, quiet reading room, assembly hall and eventually even a media production studio.

“All of our students will be introduced to the equipment and how to create video and audio because we see that as a pretty core skill for communicating and expressing themselves these days,” said Andrea Fanjoy, the head of the new senior school.

She said the site and the underlying educational model applied within provide its students with an ideal space to grow into independent, intrinsically driven learners.

“It breaks my heart to see that some kids and some schools will be able to build bigger, build faster, build nicer because they can use tools that publicly funded schools can't,” said NDP #education critic Marit Stiles.

“The heart of the school and one of the prime spots is going to have room for student pop-up shops, because once you introduce entrepreneurship, which we already have in our junior school, you need a way for them to sell what they are coming up with,” Fanjoy said.

Kingsway’s existing school doesn’t offer any financial aid for students who would otherwise be a good fit, but can’t afford the $29,000 a year tuition, so they are looking to include some equity-building efforts in the senior campus.

"We recognize that there are students who wouldn't have the opportunity to come to the KCS senior school that deserve that opportunity," said Hallie McClelland, the school’s director of advancement.

Private and independent schools in Ontario do not receive any government funding, unlike in Alberta, British Columbia and Quebec, and McClelland and Fanjoy say their school is serving an unmet need.

"We are offering an alternative model for those families who, for whatever reason, have made the personal decision not to stay or go into the public system," said McClelland.

Investors able to commit at least $2,500 for five years get a three per cent annual return, while those willing to lock up at least $50,000 for seven years will earn five per cent.

The school has already sold $1.2 million in bonds and aims to reach $3.5 million by July and the remainder by Dec. 1. It’s hosting information sessions for potential investors next week.

The school is also creating a program to connect students with the expertise of “a potentially unlimited roster of adults, either parents from our community, family members, friends, local community members, certainly anybody from any background whether they're from the public system, private, corporate, not-for-profits," Fanjoy said.

“Parents aren't going to be coming in for pizza lunches, but they may be answering emails, providing internships, providing co-ops, coming into speak, or offering up a facility, if in fact they work at an organization that has a facility of relevance,” she said.

While attending the school might be out of the financial reach of many, Fanjoy said privilege need not be a factor in equipping young people with the skills to thrive in the modern world.