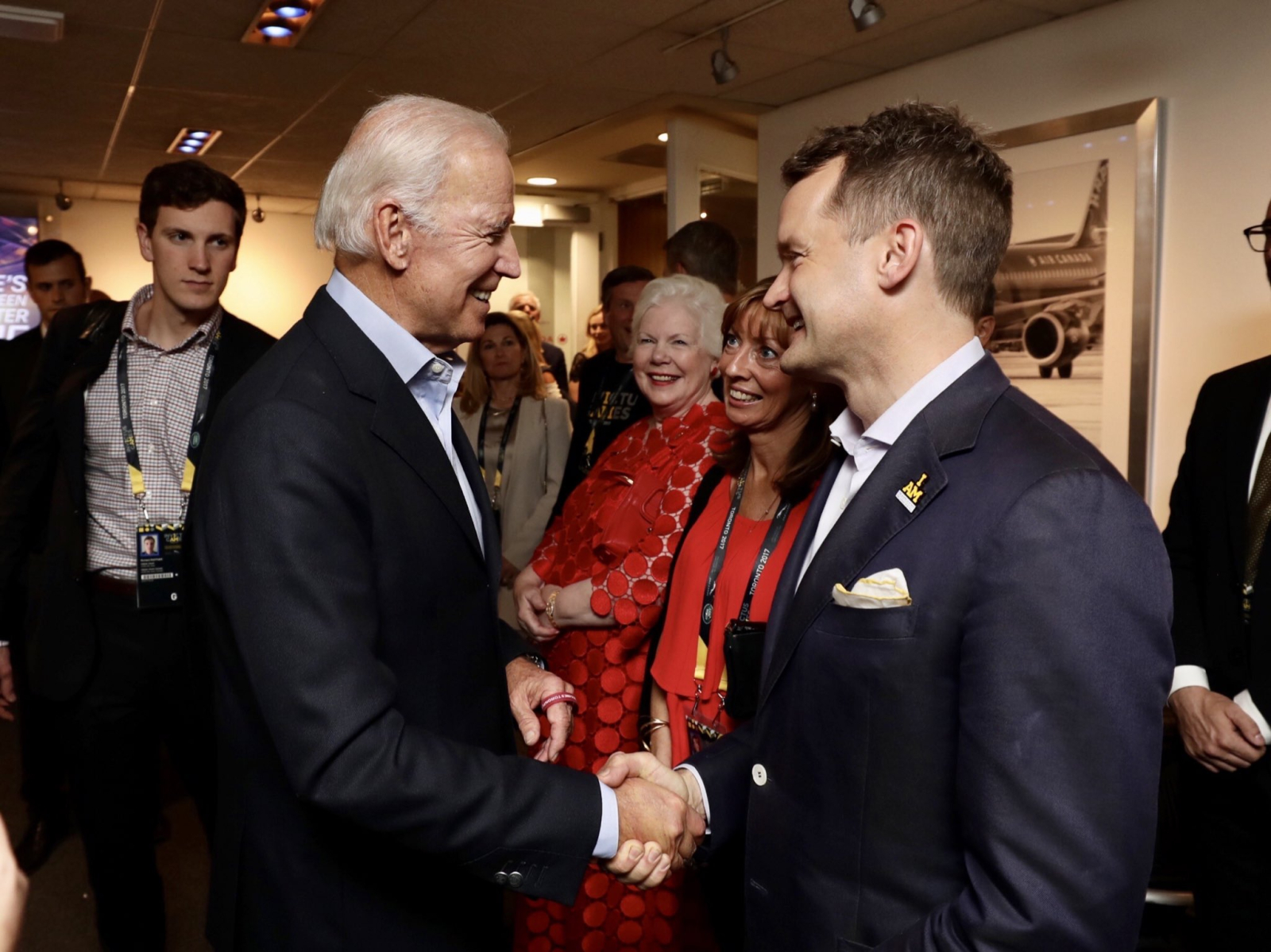 U.S. President Joe Biden, then a former vice-president, meets with Natural Resources Minister Seamus O'Regan, then the minister of veterans affairs, in 2017 in Toronto for the Invictus Games. O'Regan photo / Twitter
Previous story

Natural Resources Minister Seamus O’Regan got into a heated exchange Monday at committee over the Line 5 oil pipeline and the reality of the climate crisis.

O’Regan clashed with Conservative MP Jeremy Patzer during a meeting of the House of Commons natural resources committee, after the Cypress Hills—Grasslands MP began demanding if the minister could recite to him how much oil the controversial pipeline through Michigan to Ontario carries per day.

In return, the minister demanded to know if Patzer believed in climate change. The two began talking over each other until the committee's chair stepped in to remind Patzer to respect the French-English interpreters who have to translate for listeners in real time.

Patzer was halfway through his allotted time for questioning, which he had focused on Canada-U.S. energy relations, when he asked O’Regan: “Do you know how many barrels of oil Enbridge Line 5 carries per day?”

“Sir, I’ll be honest, I want to have a meaningful conversation with somebody who believes in the reality of what is going on on this planet,” the minister responded.

“If you answer my question then we’ll find out where we’re at with this conversation,” Patzer shot back. “Do you know how many barrels of oil a day Enbridge Line 5 carries, yes or no?”

O’Regan paused and then asked a question of his own. “Do you believe in climate change?” he asked Patzer.

While O’Regan didn’t explicitly mention it, last week the Conservative Party membership debated a proposed policy at their national convention that would have had the party declare that “climate change is real.” The proposal was voted down.

O'Regan's cabinet colleague, Environment and Climate Change Minister Jonathan Wilkinson, took the opportunity to make the link clear during question period on Monday, when he said Conservatives had "rejected science" this "past weekend."

At committee, Patzer repeated his question about the barrels of oil.

“None of these questions or answers mean a whit if we do not all agree that climate change is a reality,” O’Regan offered.

“I’m asking a question. You’re here to answer our questions,” said an agitated Patzer as the two men began talking over each other.

“You answer my question. How many barrels of oil per day does Enbridge Line 5 carry?”

“How many barrels a day?” asked Patzer.

“How many barrels a day? So you clearly don’t know,” Patzer declared. “You’re the minister, you should know the answer to this.”

“No, no, no. I’m not going for these gotcha questions. At all,” said O’Regan.

“It’s not a gotcha question, it’s a pretty simple one. The answer is over 500,000 barrels per day,” said Patzer, as he and the minister continued to talk over each other.

“I live and breathe Line 5 every day,” O’Regan started, before Liberal MP James Maloney, the committee chair, stepped in to ask Patzer to allow the minister to answer the question “if for no other reason than out of respect for the interpreters.”

“How many barrels a day? I gave you the answer, did you hear it?” Patzer tried again.

“Tell me the point of this, again,” O’Regan responded.

Patzer repeated his own answer to his own question — 500,000 barrels per day — and said he wanted the minister to understand the figure because it was equivalent to nine trains with 110 cars carrying oil each. “How many phone calls have you made?” Patzer asked about the pipeline.

“I make calls every day of the week, and have ever since this became the lightning rod that it has. And I have to take these threats seriously because hundreds of thousands of homes, not only in our country but in the United States, depend on Line 5.”

For almost two months, the Conservatives have been arguing the Liberals are not working hard enough to reverse Michigan Gov. Gretchen Whitmer’s decision to shut down Enbridge’s underwater pipeline through the Straits of Mackinac by May, out of fears of a “catastrophic oil spill” in the Great Lakes.

Both the federal Liberal government and individual MPs on a separate Canada-U.S. committee have vowed to fight the shutdown.

Help us help you, MPs tell Enbridge over Line 5 dispute

Carl, you captured that

Carl, you captured that exchange perfectly. The entire meeting was depressing. One major party doesn't believe in climate change; the other touts plutonium and small modular reactors as a climate change solution.

A pox on both their houses.

A pox on both their houses.