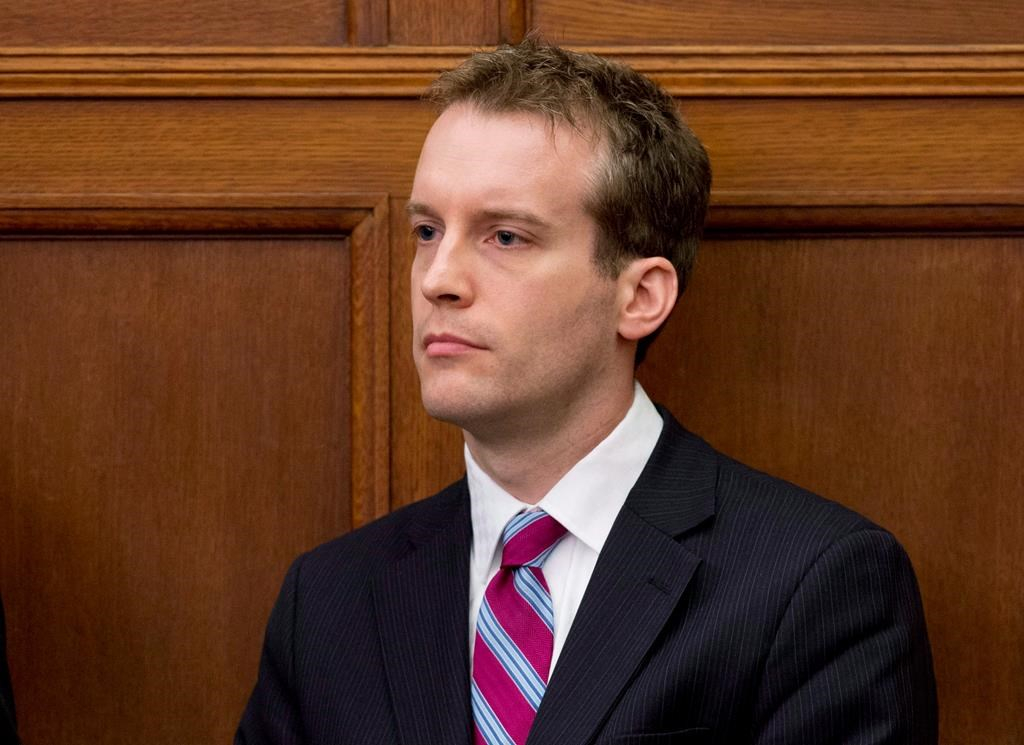 Canadian Prime Minister Stephen Harper's Chief of Staff Ray Novak stands along the wall as he watches the prime minister speak to members of Caucus on Parliament Hill on Tuesday, May 21, 2013 in Ottawa. File photo by The Canadian Press/Adrian Wyld
Previous story
Next story

A former top aide to Stephen Harper suggested Monday that Gen. Jonathan Vance may have misled the then prime minister when asked about his personal conduct months before his appointment as the Canadian Armed Forces’ commander in 2015.

Former Harper chief of staff Ray Novak’s comments came in testimony to the House of Commons defence committee, where he pulled back the curtain on what the Harper government knew about allegations of misconduct against Vance before he became defence chief.

Novak told the committee that Harper was first notified by his national security adviser Richard Fadden in March 2015 about “an issue” with Vance, who at the time was the leading candidate to become the next chief of the defence staff.

That issue was a relationship that Vance had with an American military officer, Kerry Wheelehan, while the two were both working at a NATO headquarters in Naples, Italy. The two are now married.

Novak testified that officials were told Wheelehan was not under Vance's direct command, and both the Canadian and American militaries had reviewed the matter and there was no evidence that Vance had done anything wrong.

Harper nonetheless raised the issue directly with Vance in a meeting that month, according to Novak.

“The prime minister asked him directly whether there was anything else that he should know,” Novak told the committee. “And all I recall the general saying ... was that he was glad the matter had been reviewed and was behind him. And that was it.”

Vance’s appointment as chief of the defence staff was announced the next month and a change-of-command ceremony planned for mid-July 2015. But Novak said weeks before that ceremony, the government received more allegations about Vance’s conduct.

One of those related to the same issue with his future wife, Novak said, which prompted a military police investigation. The other was a “rumour” that Vance had had an inappropriate relationship with a subordinate while posted to CFB Gagetown in 2001.

The latter allegation was relayed to him by then-veterans affairs minister Erin O’Toole’s chief of staff, Novak said, adding that he subsequently asked Fadden to investigate.

Fadden told the Prime Minister’s Office “that he had discussed the rumour directly with Gen. Vance, who responded that he had been in a public relationship with the named individual at the time and that this person did not report to him,” Novak said.

Vance also denied to Fadden that he had done anything to try to further the woman’s career, Novak added.

Global News has reported allegations that Vance was involved in an ongoing relationship with a subordinate, Maj. Kellie Brennan, that started in 2001 and continued after he was named defence chief in July 2015.

While Novak said he could not definitively recall the woman’s name, he told the committee he watched a Global interview with Brennan last month, “which is obviously deeply, deeply disturbing.”

“I think it’s clear she made extremely serious allegations,” he added. “And if they are true — and I have no reason to doubt her — that means the general was not truthful with the prime minister in their meeting of March 2015.”

The allegations against Vance have not been independently verified and Vance has declined requests for comment from The Canadian Press. However, Global has reported that Vance has denied having had a sexual relationship with Brennan while she was under his command.

“We had internally agreed that this appointment would be deferred or cancelled if necessary if those investigations yielded additional information, which they did not,” he said.

Military police, who found no evidence that Vance did anything wrong in Italy, are now conducting separate investigations into allegations of misconduct by Vance and his successor, Admiral Art McDonald, who has temporarily stepped aside as defence chief.

McDonald has not commented on the allegation against him.

Novak’s testimony came as the defence committee continues digging into the Liberal government’s handling of the allegations against Vance, which also include a Global report that he sent a lewd message to a corporal in 2012, before he was defence chief.

Liberal members noted Novak referred the allegations against Vance to senior public servants to investigate, suggesting that is the same approach that the current government took when the military ombudsman flagged an allegation of misconduct against Vance in 2018.

Defence Minister Harjit Sajjan has said he referred that matter to officials in the Privy Council Office, the central branch of the federal government, but they were unable to proceed with an investigation because the ombudsman would not provide them with details to go on.

Sajjan has not said whether he raised the issue directly with Vance.

Novak also suggested O’Toole likely knew about the allegation that Vance had had an ongoing relationship with a subordinate. O’Toole, who is now Conservative leader, has said only that he was not involved in the process to select Vance as defence chief.

Novak’s testimony came on the same day as a senior military officer who had an affair while deputy commander of the North American Aerospace Defence Command in Colorado that he is leaving the military.

Lt.-Gen. Christopher Coates announced his pending departure in a message to service members Monday morning, weeks after the affair with an American civilian while he was second-in-command at NORAD headquarters in Colorado became public.

"Last week I asked the (chief of the defence staff) for my release," Coates wrote in his message, a copy of which was obtained by The Canadian Press.

"I want to emphasize that this is my decision. After much reflection, I made this decision for my own personal reasons, including what I believe would be in the best interests of the Canadian Armed Forces."

The Department of National Defence has said Coates did not violate any rules as the civilian was not under his command, and that he reported the affair to American and Canadian officials.