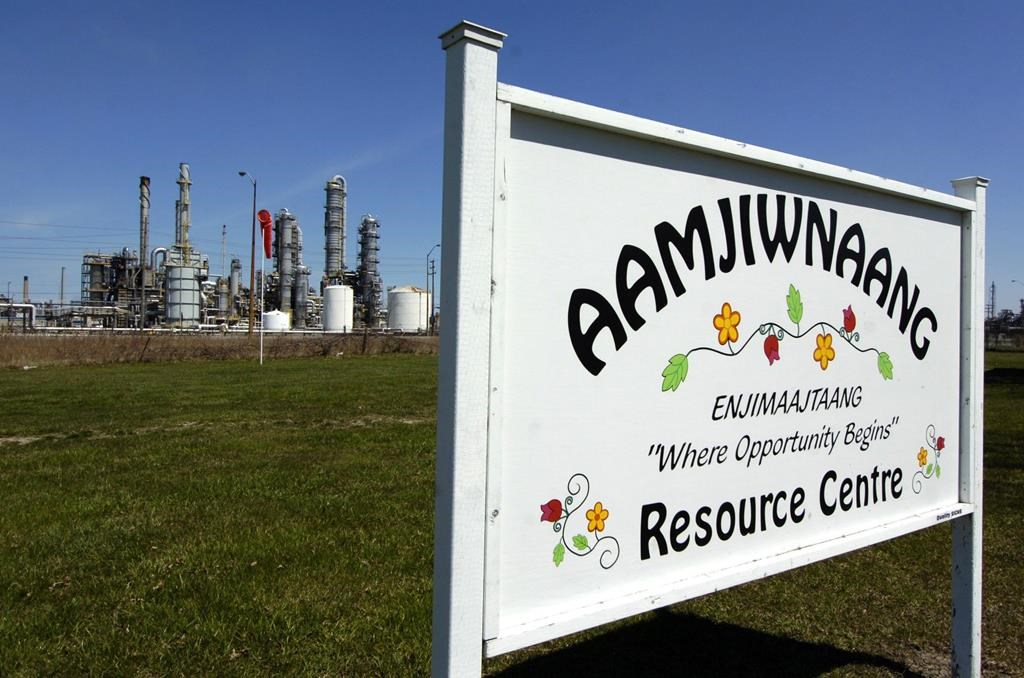 A sign for the Aamjiwnaang First Nation Resource Centre is located across the road from NOVA Chemicals in Sarnia, Ontario on April 21, 2007. File photo by The Canadian Press/Craig Glover
Previous story
Next story

A new tool that measures the environmental quality of any urban street in Canada — and maps it out in colour — illustrates vividly the many neighbourhoods in the country that have poor environment scores, neighbourhoods that are often home to racialized communities.

GoodScore assesses air quality, street greenness, amenities, transit and recreation on a scale of 1 to 100. The prototype tool was made for the public and policy-makers alike “so people can create evidence and stories that will illustrate inequity,” says Eleanor Setton, the Victoria-based managing director of the Canadian Urban Environmental Health Research Consortium.

Homes in the Aamjiwnaang First Nation reserve, nestled in the midst of petrochemical plants in southwestern Ontario, most often record scores under 10 and appear in blazing red on the map. The neighbouring city of Sarnia shows scores of 50 and above and is presented in less alarming colours of tan and blue.

“This is systemic racism,” says Scott Grant, the air-quality expert at Aamjiwnaang First Nation, as he looks at the red-covered map of the community. “It’s a sensitive topic too, because the community doesn’t want to be seen as a horrible place, and it isn’t, it’s a wonderful community, friendly people. It’s just patently unfair what they’ve had to endure.”

Setton and her team have found that Toronto, Montreal and Vancouver all have more impoverished households in neighbourhoods with lower walkability, lower streetscape greenness and worse traffic-related air pollution. They note the health impacts of these features are linked to diabetes, lower physical activity and poorer birth outcomes.

Poor people living in poor-quality neighbourhoods experiencing poor health isn’t revelatory, but when it intersects with race, those impacts can be exacerbated, says Ingrid Waldron in her book "There’s Something in the Water." She explores the long history of environmental racism, such as Africville in Nova Scotia, a Black community that experienced years of industrialization and marginalization.

Waldron explains that socioeconomic status is a key driver for environmental racism: poverty stops people from being able to move out of poor-quality environments, but sociopolitical factors also contribute. These communities can have less political clout in anything from local city planning — such as where the new sports facility will be built — to decisions on large-scale projects.

Waldron points out examples where public hearings are held in places community members can’t easily get to and only in English, or require technology and internet access.

Actor Elliot Page eventually turned Waldron’s book into a documentary, which premièred at the 2019 Toronto International Film Festival and now is available on Netflix.

John Williams, a member of the WSÁNEĆ Nation on Vancouver Island, has lived both on reserve in Tsawout and within the nearby cities of Victoria and Sidney, and was curious how they would compare in GoodScore. His reserve address has a score of 49, while his current address in Sidney scores 55.

“That’s not a huge difference,” he says, but he and his family did decide to move out of Tsawout into the city. “Here in Sidney, I live in between two schools within walking distance, but in Tsawout there isn’t a school.” Says Williams, who has a school-aged daughter, “We spent a lot of time on the bus getting to places.”

Tsawout is an example of a relatively well-resourced First Nations community, though it wasn’t always that way. Williams says its health centre, recreation facility, and several playgrounds were all built within the past 10 years or so.

Lenore Zann, a Nova Scotia Liberal MP, has made it a goal to tackle environmental racism, introducing a private member’s bill that would require the environment minister to produce a plan to redress it.

With support from the Liberals and New Democrats, the bill passed its second reading in the House of Commons on Wednesday and is headed to a committee for close study.

“Like systemic racism, environmental racism has been ignored for far too many years. The time has come for us to redress the past and make sure they don’t continue,” Zann says.

Waldron and Zann worked together on Bill C-230, hoping an executive order from U.S. President Joe Biden that includes efforts to curb environmental racism south of the border will bolster support in Canada.

Canada needs a national strategy using “data that looks at the links among race, gender, education, employment, income, health and environmental harms, as well as other factors,” Zann says.

Setton and her team have been doing just that. GoodScore is a prototype they will continue to develop over the next three years with a grant from the federal government.

“What can public health people learn from using these data? Visualizing them, intersecting them with low socioeconomic indicators and seeing where we need to change, where we need to prioritize our efforts,” Setton says. “It's really about setting priorities using mapping.”

Paleah Moher is an environmental health scientist and journalist. She is currently a fellow in global journalism at the Dalla Lana School of Public Health at the University of Toronto.