A sushi chef's journey to source only B.C. seafood 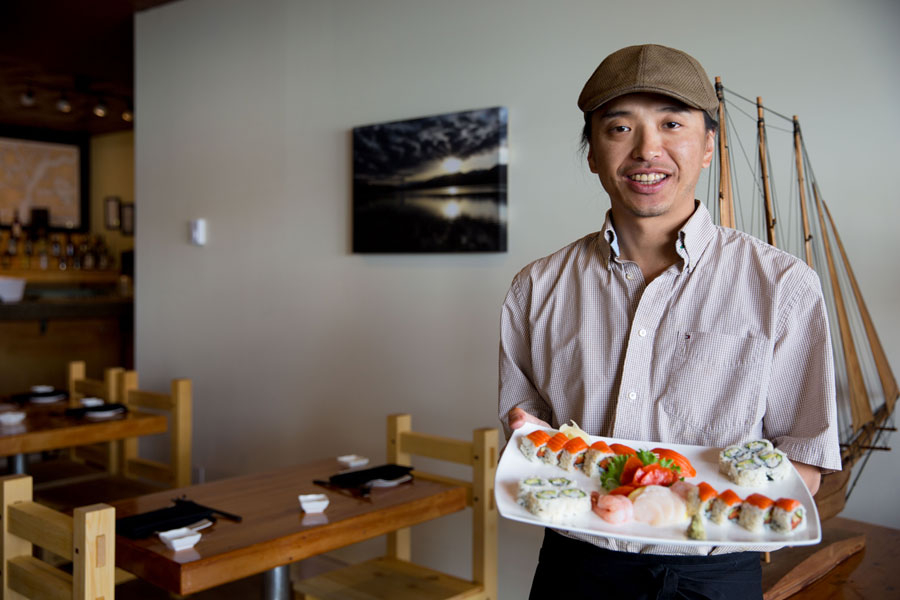 For Dai Fukasaku sushi is beautiful in its simplicity - a simplicity that demands local fish.

That philosophy lies at the heart of the chef's Prince Rupert restaurant, Fukasaku of Prince Rupert - and it is radical. Unlike other sushi restaurants the Japanese-born has worked at, Fukusaku has committed to sourcing all his fish from the sea lapping next to his pier-side restaurant in the northern B.C. city's trendy Cow Bay neighbourhood.

Despite having a bounty of fresh fish, Canada exports over two thirds of the seafood it produces, making it the world's seventh-largest seafood exporter. In B.C. alone, about 75 per cent of the fish caught here leave the country - yet federal data show that most of the fish eaten in the province is imported.

Fukusaku wanted his restaurant to push back against those global trends.

“I had some market, business types of ideas, but once I got into it, I started to get to know local harvesters and farmers,” he said.

“It’s very important to have local food … (often) we don’t even know who produced the food, and then we consume it.”

Aside from environmental and ethical reasons, Fukasaku says there’s something magical about using ingredients from his backyard.

“I’m probably the happiest chef in the world. All of my ingredients ... they are so nice,” he said.

“And I know who caught my fish, where it was caught, how it was caught. And those small things add up — I can put more love and respect into my dishes.”

Fukasaku would describe the plates he creates as "Japanese fusion," partly because he doesn’t have any formal culinary training. It was a combination of YouTube videos and a fluke experience in Ohio that got the Tokyo native making sushi. After studying music in the United States (in limbo and without enough money to pursue grad school), he started working at a Japanese restaurant as a server.

“It’s very important to have local food … (often) we don’t even know who produced the food, and then we consume it,” says sushi chef Dai Fukasaku. #BC #Seafood #EatLocal

He was soon recruited by the short-of-staff kitchen.

“The way I was taught was the really hardcore Japanese way,” he said, with a laugh.

“The chef said, ‘Dai, stand behind me, watch and learn.’ I told him I didn’t really want to learn sushi and (asked him) to be more helpful, but he said no.”

From there, Fukasaku spent a lot of time on YouTube watching videos on sushi techniques. He returned to Tokyo after a few years for family reasons, but decided to head back to North America after spending the entirety of his 20s there.

After a stint at a sushi restaurant on the Sunshine Coast, he eventually opened Fukasaku of Prince Rupert. He started off by making a call to a local fish-processing plant in Port Edward, which said it would support him.

“That was the time I was sure I could do it. And they’re doing me a big favour — because they are Japanese company, exporting lots of great B.C. seafood overseas,” he said. “My business is a pinky-sized business to them, but they still took the time.”

The relationship with the processing plant has been huge for Fukasaku, who says he swings by when the boats are offloading to grab a few things. He imagines it’s not so easy for other restaurant owners who may not have the same relationships or connections.

Even with that vendor, it has been a sourcing puzzle for Fukasaku. Until recently, he was able to get wasabi from Vancouver Island. He’s now working with a local hydroponic operation to see if they would be interested in growing wasabi plants.

Also, a recent change is his 100 per cent certification from the Vancouver Aquarium’s Ocean Wise program, which he had to give up when B.C. sockeye, chum, and pink salmon were removed from the list because of a lack of research. Fukasaku of Prince Rupert was the first sushi restaurant in B.C. to have the full certification.

The recommendation from Ocean Wise was for Fukasaku to source the species with Alaskan-caught fish, which he decided not to do.

In terms of next steps, Fukasaku is working on creating a local marketplace to connect fishers to buyers. Eventually, he hopes to make it a B.C-wide community that would help his remote area easily get local produce from other areas of the province.

It’s his goal to educate others about the benefits of local seafood, while continuing to operate as sustainably as he can.

It’s a privilege, he says, to be in his shoes.

“My dining area is right by the ocean, my kitchen is over the sea. I can make sushi while watching fishermen coming back. I’m able to identify some of the boats,” he said.

“I really feel close to the fishers and seafood I’m serving — I can’t think of any other place I could open my restaurant other than Prince Rupert.”