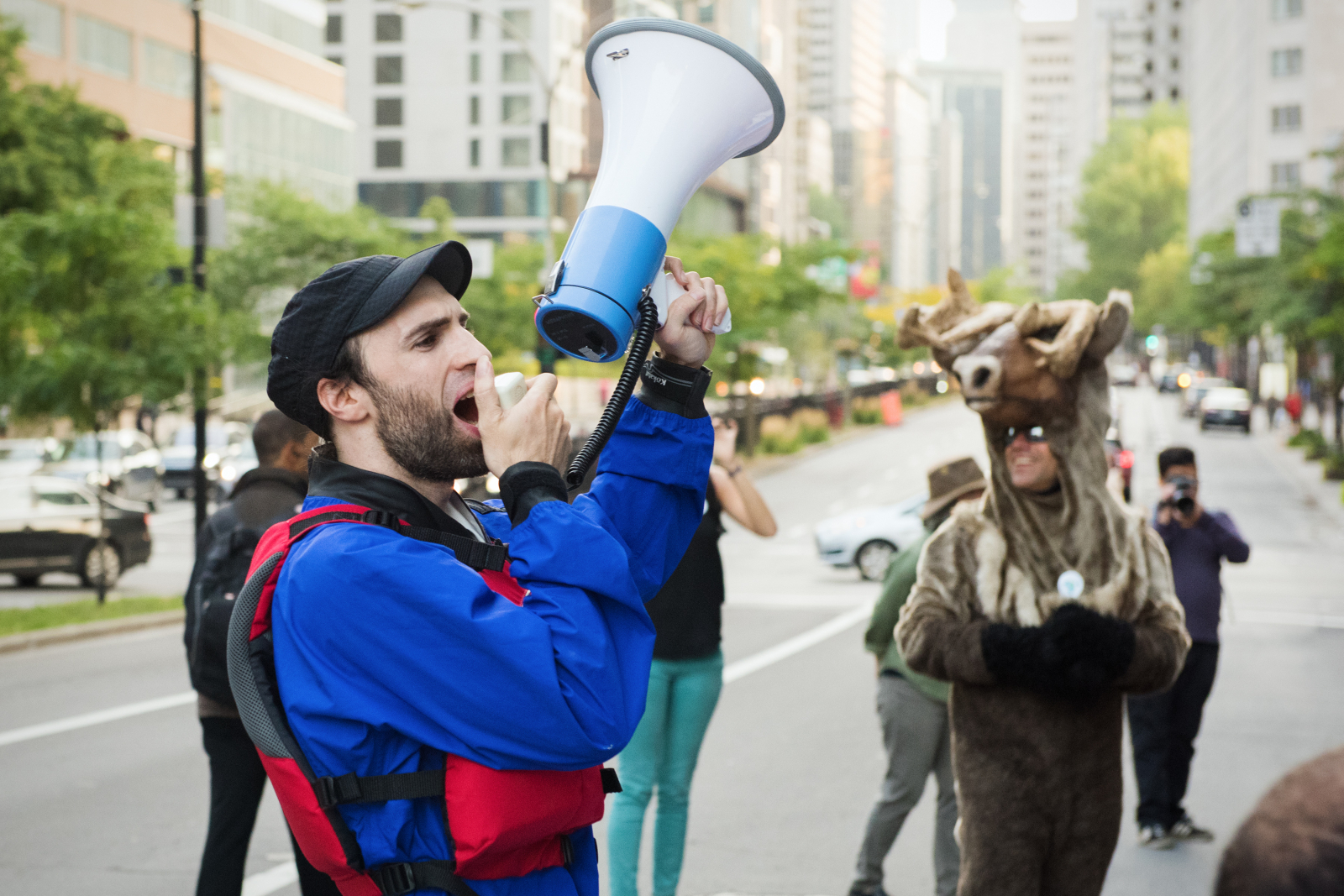 Pier-Olivier Boudreault at a 2017 flash mob to protect the Magpie River. Photo by Melissa Vincelli
Previous story
Next story

Pier-Olivier Boudreault, conservation director for Canadian Parks and Wilderness Society Quebec, was the spark that led a coalition of citizens, lawyers, the Innu Council of Ekuansitshit and the county municipality of Minganie in North Shore Quebec to have Muteshekau-shipu (Magpie River) become the first Canadian river granted legal personhood, giving it the right to human protection.

Tell us about the road to victory.

In 2009, whitewater paddlers sounded the alarm to CPAWS Quebec that Hydro-Québec had listed the Magpie for dam development. National Geographic had already described it as one of the world’s best whitewater paddling rivers, and to these paddlers, this was a tragedy in the making. Together with citizens, we wrote letters and lobbied decision-makers saying this area had sacrificed enough with existing dams and resource extraction. But by the time I became the conservation director, it was clear something else was needed.

In 2018, I contacted the International Observatory on the Rights of Nature, which had recently published an op-ed in Le Devoir on protecting the St. Lawrence River by ascribing to it all the legal rights of a person. They helped me to apply their knowledge to the Magpie. Innu Council of Ekuanitshit Chief Jean-Charles Piétacho had visited the Maori after they succeeded in similarly protecting their Whanganui River and was inspired to hope for the same for the Muteshekau-shipu. Municipal decision-makers joined us when we pointed out the potential long-term environmental and economic benefits and residents told them how important it was to them.

What does it mean to have this declaration?

For the first time in Canada, a river is declared to have rights: The right to flow, to respect, to fulfil its ecosystem functions, to maintain its integrity, to be safe from pollution, to regenerate, and just as if it was a corporation or a person in Canada, the right to sue.

Meet the Quebec conservationist who pushed to get legal personhood status for the Magpie River. #Quebec #QuebecLaw #LegalPersonhood #RightsOfNature

Do you think a declaration like this made by the Innu and a municipality will stand up to an incursion by Hydro-Québec?

Corporations have legal personhood. And a growing number of similar precedents have found nature should, too. Canada is a signatory to the UN Declaration on the Rights of Indigenous Peoples, so this adds another layer of protection. Hydro-Québec has said it will not construct any more dams on the river, but still refuses to grant the river permanent protection.

What brought you into leadership in this work?

I fell in love with the natural world as a child playing with frogs in the Ashuapmushuan River in my hometown of Saint-Félicien, Quebec. I have a biology degree and a passion for protecting places that people love. Data is important and helps us measure species at risk, soil damage and the amount of carbon stored in the boreal forest. But what motivates us is love. This is not measurable, but it is the source of our power.

What other choice is there really? My children are young, but when they are a bit older, I want to be able to say that I did all I could. Outside of work, I do what I can to defend affordable education and I work hard to discourage new oil and gas developments. I cannot do all this and be a good father if I am not hopeful that my efforts will contribute to the difference we need. When we were working to secure the protection of the Chic-Chocs Mountains in eastern Quebec, we asked people to send us videos of them talking about what this place means to them. Their stories of the love they feel for their places were so moving that it was impossible to believe we wouldn’t win. And we did.

Be creative. The ways we have done things in the past are not working. Try new things. If we had continued with the usual campaigning, I doubt we would see the Magpie protected now. We dared to try something new.

Work with older people. We cannot afford the time to relearn old lessons.

Do you have anything to say to older people?

Your wisdom and life experience and determination to continue to think in new ways are crucial in encouraging the young people around you to lead. I am so inspired by the love the older people here have for their places. Teach that love to us.

Bravo, you are an inspiration

Bravo, you are an inspiration to me.