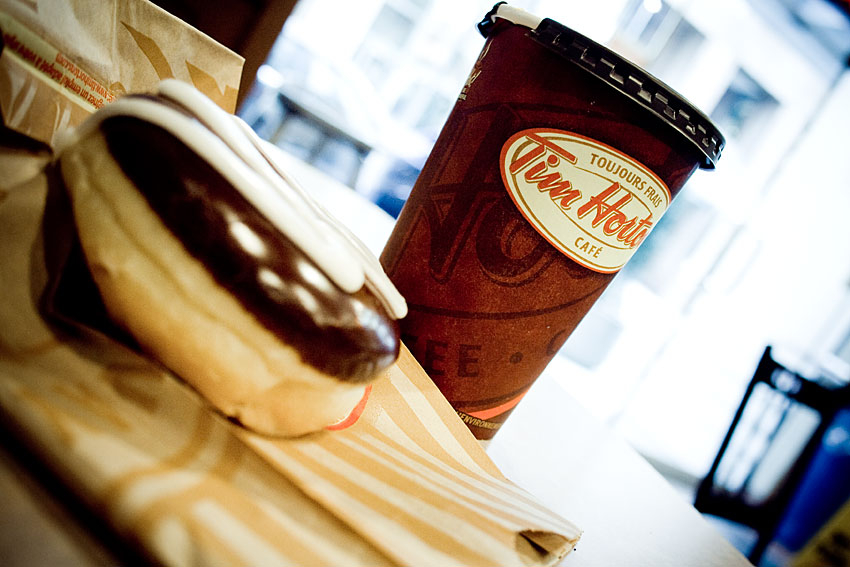 Canadians are likely exposed to more toxic chemicals at the grocery store than Americans, according to a recent study.

The report, which was not peer-reviewed, found that receipts and food packaging used by several leading Canadian grocers and foodservice companies — including Tim Hortons, Sobeys, and Couche-Tard — could contain bisphenols, phthalates, PFAS, and other harmful chemicals.

Bisphenols are a class of endocrine disruptors commonly found lining receipts, while phthalates are hormone-disrupting chemicals used to make plastics more flexible, often found in plastic tubing and conveyor belts. PFAS — or per- and polyfluoroalkyl substances — are a class of carcinogens that harm the immune system and thyroid used to make food packaging grease-proof.

“Evidence tells us that chemicals like PFAS in food packaging and bisphenols on receipts are dangerous,” said Tim Gray, executive director at Environmental Defence. The organization is a co-author on the report alongside U.S.-based environmental groups. “Market-leading Canadian retailers like Couche-Tard, Metro, Sobeys, and Tim Hortons have no excuse for their inaction to protect customers, workers, and the environment from toxics.”

Often, eliminating these chemicals from supply chains, receipts, and items that touch food is largely a matter of company policy to research their presence in the supply chain and switch to safer alternatives. And the changes usually aren’t prohibitively expensive, since most dangerous chemicals have safer and affordable alternatives, said Gray.

The report compares and ranks the chemical policies and practices of 50 retail chains with stores in the United States and Canada. Canadian grocery chain Empire Co. — which owns Sobeys, Safeway, and other brands — and the Québec grocer Metro were at the bottom of the rankings. They were joined by Alimentation Couche-Tard (Circle K and Couche-Tard convenience stores), and Restaurant Brands International, parent company to Tim Hortons and Burger King.

“We were unaware of this report and therefore cannot comment. However, we have taken note and will be looking into it,” said a spokesperson for Metro in response to the report. None of the other companies responded to a request for comment.

While most companies have implemented some policies to protect customers from harmful chemicals primarily found in food packaging and receipts, Canadian grocers and retailers’ efforts ranked consistently lower than those taken by their American counterparts.

“We really should … be able to count on government for regulating a bottom line so (Canadians) aren’t exposed," said Tim Gray of @envirodefence. #FoodPackaging #Toxins

“Having a low regulatory bar encourages companies not to go much beyond it” when it comes to eliminating toxic chemicals, he said. “I think what that points out is that … government isn’t keeping up with the science — we need regulatory reform.”

That reform could be on the way.

The federal government last week tabled a bill to overhaul the Canadian Environmental Protection Act (CEPA). Under the proposed law, the agencies responsible for regulating toxic chemicals — Environment and Climate Change Canada and Health Canada — would be required to evaluate the cumulative impacts of exposure to multiple chemicals and their impact on vulnerable populations.

The annual #MindTheStore report card is out! Which retailers are getting #PFAS #ForeverChemicals out of food packaging? @ChipotleTweets @panerabread @tacobell @McDonalds @amazon lead!

The agencies will need to conduct regular biomonitoring surveys. Biomonitoring is the measurement of chemical compounds or the products they make when they break down in people. Taken from blood, urine, and other bodily tissues or fluids, the measurement indicates how much of a chemical is present in a person.

Large-scale biomonitoring studies that target a region or specific population provide insight into their level of exposure to toxic chemicals. Under the new law, the agencies will be required to conduct more large-scale surveys and use them to develop regulations that better protect vulnerable populations, according to Health Canada.

“Evaluation is key so that … chemicals are evaluated based on their impact on the target population, rather than the population as a whole,” Gray said, noting that some chemicals have disproportionately large impacts on groups like children or pregnant women or are in products — like skin whiteners, for example — targeted to people based on race, employment, or other factors.

“No one experiences chemicals as a whole. Everyone experiences them individually, so it’s a huge improvement to start thinking about the impact on identifiable populations who are going to have a disproportionate exposure or reaction to those chemicals,” he said.

In a statement, Environment Canada said the new law would allow the federal government to conduct research about the cumulative impact of chemicals and their impact on vulnerable populations. The government would also be required to consider its findings while developing regulations for chemicals.

Canada is a laggard when it comes to accounting for the disproportionate impact some chemicals have on vulnerable populations, Gray said.

U.S. federal laws have required the country's federal government to account for vulnerable populations in its laws regulating toxic chemicals since at least 2016. Washington, Maine, and other states have also implemented similar regulations.

Despite the federal government proposal, the new laws remain far from coming into force — and they are badly needed.

“We really should … be able to count on government for regulating a bottom line so (Canadians) aren’t exposed. It’s important for companies to show leadership, but government really needs to raise the bar,” Gray said.