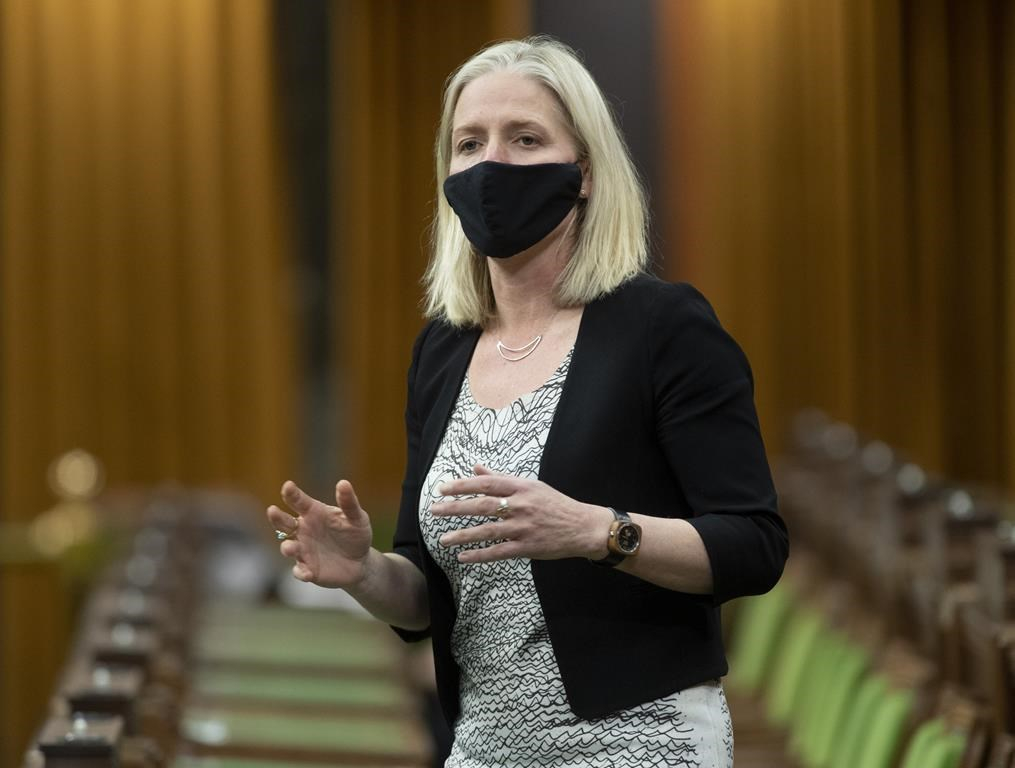 In 2020, Canada’s federal fossil fuel subsidies program provided $1.9 billion in support to fossil fuel projects in the country, a practice which environmentalists have described as “hypocrisy.” But during a Conversations event hosted by Canada’s National Observer on Tuesday afternoon, Minister of Infrastructure and Communities Catherine McKenna said that the time has come to end them.

“I think we do need to get rid of fossil fuel subsidies,” said McKenna. “I think that’s really important. We have to have the right incentives.”

Infrastructure Minister Catherine McKenna in conversation with Linda Solomon Wood on May 4, 2021.

McKenna, who described the plan as “ambitious,” confirmed that she has been in talks with her U.S. counterparts about potential collaborations in infrastructure programs, and said Canada could one-up the plan. “In Canada, I think we have to be louder and prouder,” said McKenna. “If you adjust for population and even for the dollar, we’re actually on par. We’ve invested around $250 billion in, broadly speaking, ‘build back better.’ That was even before our budget (announcement).”

Biden’s office brings a welcome change-up for the Liberals. McKenna recalled a year of positive interaction with Barack Obama’s administration before Donald Trump took office. “It was very tough times with the Trump administration, but a lot of reflections on where you should make big bets,” said McKenna. “How do you work with racialized communities, with Indigenous communities? How do you have a long-term vision? We’re doing a national infrastructure assessment, so lots of good conversations going on, and I think we can support each other.”

The primary focus of Biden’s plan, evidenced by its title, is generating jobs. McKenna said the Liberals mirrored that focus. “We’re in a pandemic, we’re in an economic crisis, we’re in a jobs crisis,” she said. “We need to talk to Canadians and Americans about things they care about. They care about jobs. (The U.S.)talked about a climate lens through all of their infrastructure investments, and that’s what we are bringing in.”

McKenna has previous experience with energy industry transitions. In 2018, as minister of environment and climate change, she led a task force to address the transition of thousands of coal workers who were losing their jobs. “Transitions don’t happen overnight — in the context of coal, we made a decision that we need to be moving to a cleaner future,” she said at the time.

On Tuesday, McKenna said during that period, she met with coal workers in communities across Canada. “I know it’s hard, but it is important to listen to folks who have different views,” said McKenna. “600 people would pack into the town hall, and they were mad and scared and worried about the future, and their kids. It’s not that they didn’t care about the environment but gosh, they wanted to put food on the table.

The first-hand experience informed her current approach to the Trans Mountain pipeline project. “I know a lot of people have a lot of problems with TMX, I’m not going to sugarcoat it,” said McKenna. “But you can get lost in one project. You know what I worry about? I worry about most people. How do I bring the most Canadians on board? The haters, whatever, are going to hate. I’m from Hamilton, right? You have to talk to real people and you have to have empathy, and then you have to have ambition, and then you have to show leadership.”

McKenna cited Indigenous communities and farmers as important contributors to contemporary climate action, and squashed the suggestion that there will be technological “magic wand” solution to the climate crisis. “Cleantech is something, but regulations are really important to drive this price on pollution, and then everyone’s got to do their part,” said McKenna.

Reflecting on her time as minister of environment and climate change, McKenna said she “had a huge learning curve” and “took some knocks,” particularly in relation to Indigenous-Crown relations. “I’m still learning, but we’ve been able to do some pretty amazing things with First Nations communities, and Inuit and Métis nations,” said McKenna.

Referring to the Ford government’s proposed development of conservation lands in Ontario, McKenna tipped her hat to National Observer’s coverage by reporter Emma Mcintosh and backed the federal government’s decision to take over the environmental assessment. “Look, I would like the province to step up,” said McKenna. “We all have to remember what is important. Once you destroy things, it’s gone.”

To help move along the clean energy transition, McKenna encouraged Canadian communities to apply for new national active transportation, electric transit and healthy communities funding. “Get your communities applying for these programs because we’re all going to do this together,” said McKenna.

She also suggested Canadians maintain pressure on representatives to implement stronger climate action. “Canadians will hold us accountable,” said McKenna. “They really, really care, and they expect governments to act.”

McKenna: “I know a lot of

A typical rambling non-answer from McKenna. Lots of words, no substance.
Glad I did not waste time watching McKenna deliver her usual bafflegab.
Still waiting on the climate leadership. Leadership is not building new export pipelines that enable oilsands expansion — the fastest growing source of emissions in Canada. This one industry generates more emissions than all of BC.
As Env. Minister, McKenna got lost on several fossil fuel projects. She also approved LNG projects in BC.
Under climate leaders Trudeau & McKenna, Canada's GHG emissions in 2018 hit levels not seen in a decade. Not on track to meet 2030 and 2050 targets.
With climate leaders like these, Canada does not need climate action foes.
Still waiting for science-based climate policy.
Not holding my breath.

Can McKenna look her children in the eye and tell them she is doing her best for them?

McKenna is an outstanding

McKenna is an outstanding representative of the Liberal love for the meaningless phrase. She wants rid of fossil fuel subsidies, but can’t do it without “the right incentives”. In 2018, she met with coal workers, and by 2021 she was adapting meet-and-greet to her new responsibilities for pipelines. Always “moving forward”, never actually getting anywhere; “lots of good conversations going on”, without action to follow. I’m ashamed to have her as my local MP.

The usual refusal to explain

The usual refusal to explain just how buying and expanding a major pipeline operation is compatible with meeting climate targets. This time it was implied that opponents are "haters" and not "real people". At least we were spared Trudeau's standard "I will never apologize for standing up for middle-class Canadians" kind of non-answer.

In the context of coal, she and her cohorts "made a decision"? Just last week Canada's flagship Powering Past Coal Alliance was revealed as a fraud, "a greenwashing engine for financial institutions.” https://www.theguardian.com/environment/2021/apr/27/global-alliance-coal...

In the context of Indigenous-Crown relations, "we’ve been able to do some pretty amazing things." First Nations would say it would be pretty amazing to get some clean water. Indigenous leaders launch $2.1 billion class-action lawsuits against Canada over lack of drinking water, https://thenarwhal.ca/first-nation-class-action-lawsuit-canada-drinking-...

"We need to get rid of fossil fuel subsidies"? There's no one more full of shit than Catherine McKenna. Canada’s oil and gas sector received $18 billion in subsidies and public financing during the pandemic, https://thenarwhal.ca/canada-oil-gas-pandemic-subsidies-report/, and last month's budget did "not contain any significant commitments to cancel fossil fuel subsidies or roll out a large-scale plan for a just transition for thousands of workers in carbon-intensive energy jobs," https://www.nationalobserver.com/2021/04/19/news/budget-2021-cleantech-f....

The National Observer does itself a disservice when it acts like a stenographer -- this too frequently occurs -- rather than an agency of critical journalism.

McKenna? What? Still around,

McKenna? What? Still around, still making empty, meaningless statements? She and the PM are two good looking empties as far as I'm concerned. Good for political activities but not much else.