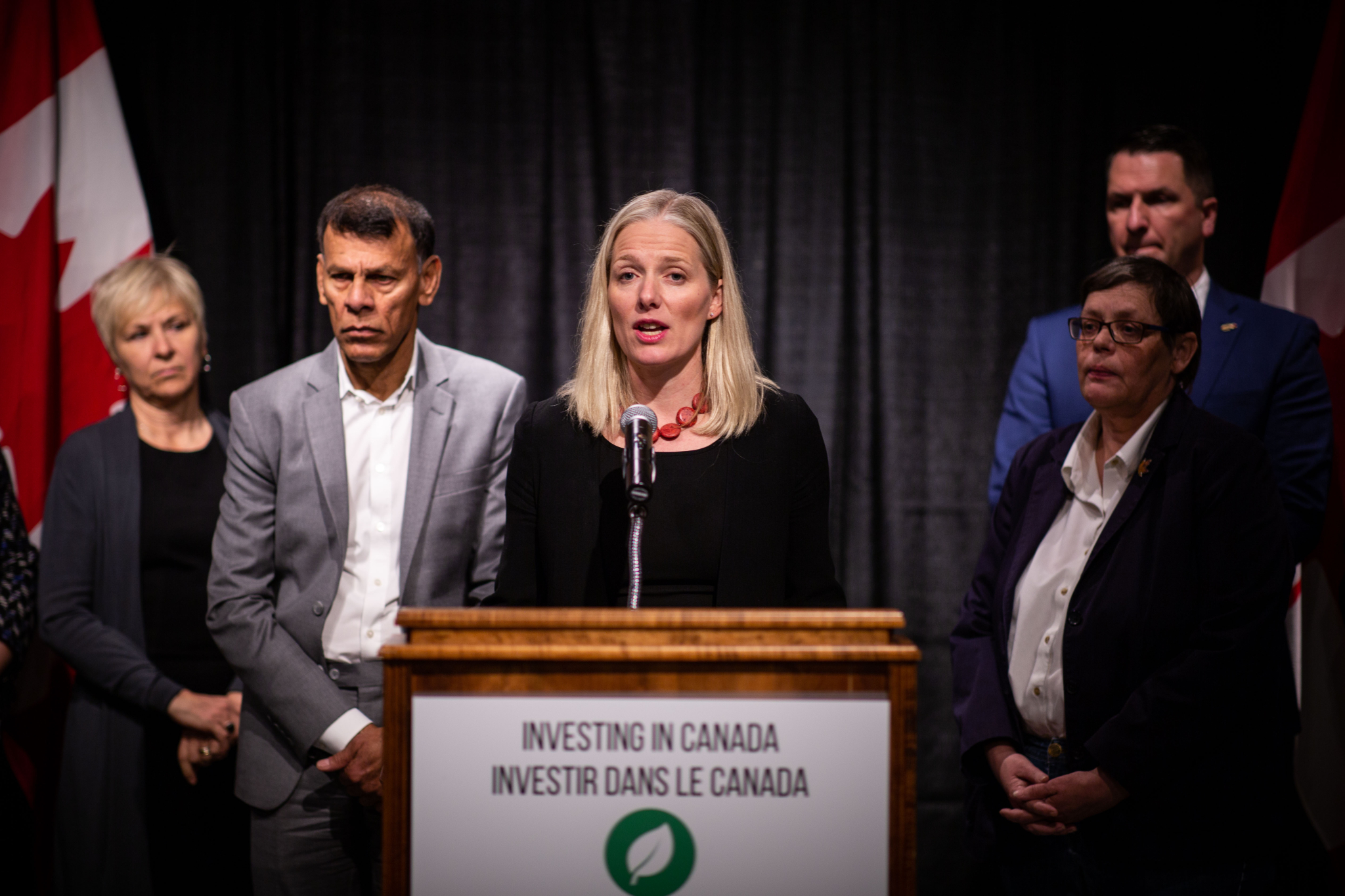 The Trudeau government has created a new team of leaders from the labour and environmental movements as well as industry to help shape a dramatic transition plan for thousands of coal workers who will soon be out of work.

The new task force will finally get started on developing new policies, nearly two years after the government had promised to create a "just transition" plan in support of a commitment to phase out coal fired power plants across the country.

Coal workers and their communities need to be included in the discussion, say labour leaders, in order to build trust around environmental initiatives and craft policy that is better connected to real anxieties and concerns.

The task force is also expected to lay some of the groundwork needed for other tough transitions anticipated for tens of thousands of workers in Alberta—home to the world's third largest reserve of crude oil after Saudi Arabia and Venezuela—as the planet moves away from other fossil fuels towards a low-carbon economy.

Environment and Climate Change Minister Catherine McKenna unveiled the members of the task force at the Canadian Museum of Nature in Ottawa on April 25.

It will be co-chaired by Canadian Labour Congress (CLC) president Hassan Yussuff, who had publicly pushed for the body at international climate talks in November, and Conservation Council of New Brunswick executive director Lois Corbett, a long-time environmental policy expert.

“It’s a privilege to meet and join such a distinguished task force, and hear some of the stories from the four provinces with coal plants — their charm, their agony and their pain,” said Corbett.

The minister rolled out the task force on the same day that French President Emmanuel Macron spoke to the U.S. Congress, and described a fossil fuel transition plan in his own terms.

France is part of an international movement spearheaded by McKenna to "power past coal" before 2030, countering efforts by U.S. President Donald Trump to remove environmental regulations and revive the industry.

"Some people think that securing current industries and their jobs is more urgent than transforming our economies to meet the global challenge of climate change," said Macron to Congressional members.

"I hear those concerns, but we must find a smooth transition to a low-carbon economy."

The Canadian task force is expected to engage with cities, provinces, unions and businesses about impacts on coal workers and the communities that support them. The work, say labour leaders, will demonstrate the government’s commitment to support workers as it moves to phase out coal — primarily affecting Alberta, Saskatchewan, New Brunswick and Nova Scotia, the four provinces that are still using coal power.

Canada’s transition off coal is "one of the most tangible steps that we can take to tackle climate change," said McKenna, presenting the team Wednesday morning. She noted how coal represents 72 per cent of Canada’s carbon pollution from its electricity sector. But in the transition to clean growth, she said, "we can’t forget what this means for families and communities.”

Alberta's NDP government has already introduced its own policies to extend employment insurance benefits and other support for coal workers in transition. Labour leaders have suggested that the federal government could provide additional support to build on existing provincial policies.

McKenna called the co-chairs "powerhouses in their fields" and thanked the CLC, Unifor and the Federation of Canadian Municipalities for helping select the members of the task force. She said the team would be presenting a final report at the "end of 2018."

No to coal, yes to pipelines — for now

There are about 3,000 people working in either coal-fired power plants or coal mines in Canada, and about 700 of those are within a few years of retirement, according to the Alberta Federation of Labour, whose president Gil McGowan was announced as part of the task force.

Most climate change policy experts say a low-carbon future that addresses climate change will necessarily mean fewer jobs in fossil fuels — not just in coal, but in oil and gas as well, which means many more workers potentially affected. Meanwhile, the low-carbon economy is expected to open up nearly $23 trillion in new opportunities, according to the World Bank.

While coal is one of the largest sources of greenhouse gas emissions on the planet, Canada's fastest-growing source of emissions are the oilsands in Alberta, where tens of thousands of people are employed directly or indirectly to exploit vast reserves that are estimated to contain about 173 billion barrels of oil.

The Trudeau government has tried to balance its national climate change strategy against its support for fossil fuel exports, throwing its support behind two major pipeline projects in 2016 — one from Kinder Morgan and one from Enbridge, that would allow for oilpatch expansion.

Asked if the task force lessons could be used in other industries like oil and gas, McKenna said the government's focus was “clearly on coal.”

“We’re in a transition, and we’ve been very clear that we support getting our resources to market, we support the expansion of the Trans Mountain pipeline. Transitions don’t happen overnight — in the context of coal, we made a decision that we need to be moving to a cleaner future,” she said.

Yussuff said the task force is fundamental to meet Canada’s climate change objectives, and noted how foreign countries were taking note. "Progressive emissions reduction policies must centre around people and communities," he said.

“This task force will help ensure that Canada meets its environmental goals, and the needs of workers and communities as we move forward. This is not just an important issue for Canada...the world is also watching us, very closely.”

In addition to Yussuff, Corbett and McGowan, the task force includes former SaskPower president John Wright, who now lectures in economics at the University of Regina. Wright has also been deputy minister of health and deputy minister of finance for the Saskatchewan government.

The panel also contains Tara Peel, the CLC’s national representative for health, safety and environment, and Matt Wayland, a political action and media strategist for the International Brotherhood of Electrical Workers.

Hmmmm. Why on earth would

Hmmmm. Why on earth would McKenna be waiting to establish such a panel for Oil Patch Workers? It is just as necessary ........ the REALLY BIG OIL companies are abandoning the Tar Sands and investing in renewables and /or automating 100’s, maybe 1000’s of oil patch jobs. Just transitions are vital for these workers and their families. Now. Perhaps she and her boss don’t want to send the ‘wrong message’ to the Industry.... that we really do need to keep all fossil fuels “in the ground” .

"While rebuking U.S. President Donald Trump's push to revive the coal power industry, Environment Minister Catherine McKenna said the federal government has no plans to shutter Canada's coal exports"
(source: CTV News, Nov.19, 2017: "U.S. prop-up of coal is 'wrong', but Canada will continue to export it: McKenna".)
Canada exported 30 million tonnes (Mt) of coal in 2016 and imported 6.3 Mt. Major exports destinations were Japan (24%), South Korea (20%), China (16%), U.S. (3%). Vancouver's various coal facilities exported 36.8 Mt of coal in 2017. The Westshore Terminals in Delta BC is North America largest single coal export facility.
While lawmakers in Washington State and Oregon have begun to shut down their own coal ports due to environmental concerns, thermal coal producers in Wyoming and Montana are diverting their product through Canada. The BC government has been criticized for allowing more and more coal shipments coming from the U.S., and doing nothing to slow down the production of coal in its own province.
In Canada, 36.2 Mt of coal was used in 2017 for electricity generation. Alberta counted for 67% of Canada's coal consumption used to produce electricity, followed by Saskatchewan with 24%. Coal imports were mostly used for steel production.
Coal, oil and gas consumption are the main producers of greenhouse gas emissions around the world. Burned here or in another country, greenhouse gases don't recognize borders. That's why we have to lower not only our own consumption of fossil fuels, but stop exporting fossil fuels to other countries.