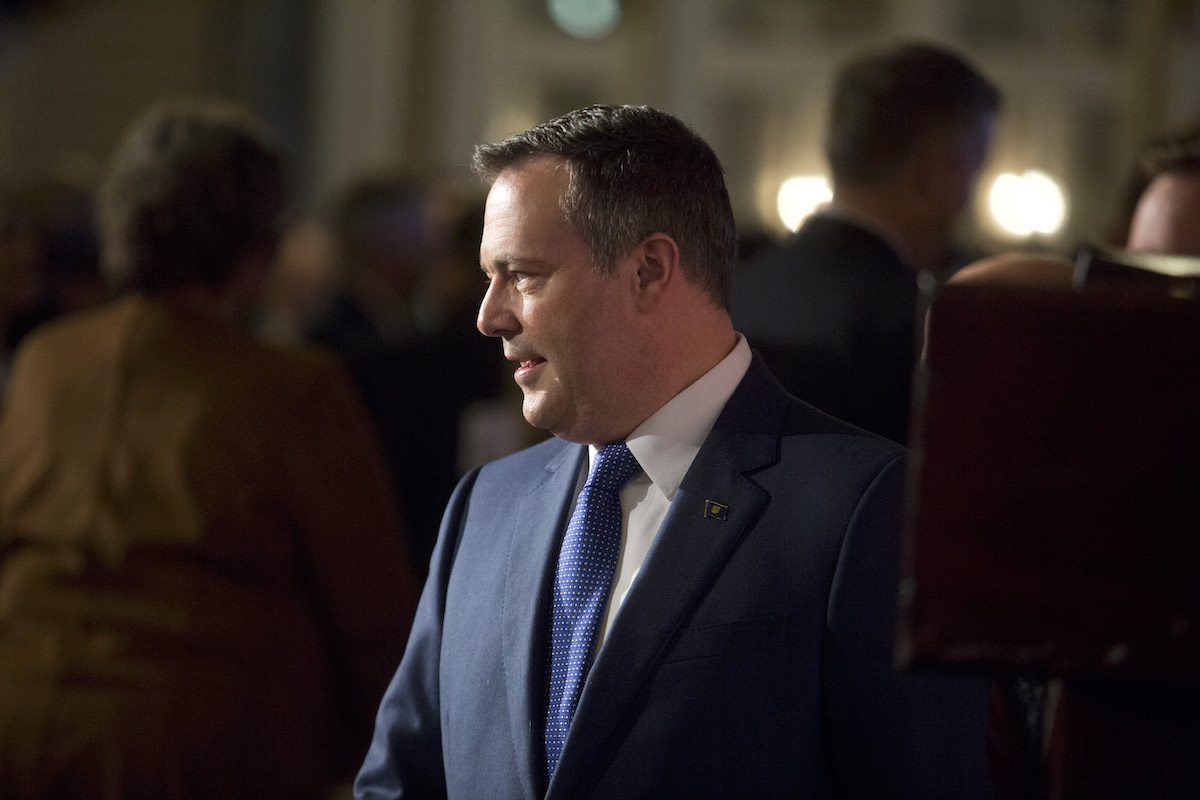 Throughout his political career, Alberta Premier Jason Kenney has repeatedly paid homage to the leadership skills of former British prime minister Winston Churchill. In a 2015 tweet, he described Churchill as “the greatest statesman of the modern era,” while last year, in defending his decision to keep Alberta’s legislature open during a pandemic, he invoked one of Churchill’s signature moments. “The work of democracy does not end in a crisis,” Kenney said. “The British House of Commons met every day during the blitz of the Luftwaffe on London.” But after more than a year of trying to fight the COVID-19 pandemic, it’s become clear that Kenney has far more in common with a lesser British statesman: Neville Chamberlain.

Chamberlain infamously believed the best way to deal with Adolf Hitler and Nazi Germany was by accommodating them where and however possible, a policy known as “appeasement,” and as a result, he nearly lost the Second World War for Great Britain before it even started. When it comes to anti-mask activists and COVID skeptics, Kenney’s government has had its own policy of appeasement — one that has resulted in Alberta losing its war against COVID-19.

The province’s soaring per-capita case counts are now the highest in North America and more than double those of neighbouring British Columbia and Saskatchewan. In a televised address on Tuesday, and during a Facebook Live event that followed, Kenney was effectively forced to admit that his less-is-more strategy isn’t working. “We will not tolerate those who endanger the health of their fellow Albertans while the vast majority of people are doing the right thing,” he said.

Those words fly in the face of his government’s actions, which have been seemingly guided by an overriding desire to tolerate the province’s COVID deniers. Just last weekend, after all, many hundreds of people showed up over the course of two days at a central Alberta rodeo that was billed as an “anti-lockdown” event. And although the organizers breached any number of public health restrictions, the premier couldn’t muster anything stronger than a tweet — one that was conveniently posted after the event was already over. One wonders if he’d have been more proactive if this was, say, a protest against a new pipeline project.

But last weekend’s event, and the Kenney government’s unwillingness to stop it, is hardly its first rodeo. In a February statement about the persistent defiance of GraceLife Church, which continued to hold indoor services in violation of existing guidelines, Kenney stressed: “Alberta’s government will always respect and protect the fundamental freedoms of religion and worship, period.” Not surprisingly, perhaps, his decision to combine half-hearted condemnations of non-compliant Albertans with a full-throated defence of their liberty and personal freedoms didn’t deter them. If anything, it may have encouraged them to push back even harder.

This sort of alligator-arming has been standard operating procedure for the Alberta government when it comes to introducing or enforcing COVID restrictions. In February, for example, Alberta Health Services quietly confirmed that it was dropping the charges it had filed against a restaurant in Mirror, Alta., that had openly defied orders that it close — and even agreed to pay the Whistle Stop Café’s legal fees. That restaurant, not surprisingly, has continued to defy public health orders and was forcibly closed once again by AHS on Wednesday after announcing plans to hold a rally this Saturday.

Kenney’s willingness to tolerate COVID-skeptical Albertans even extends to the ones who want to harm him and his family, apparently. In responding to a question about the death threats that he and his mother have received, Kenney said: “I understand COVID fatigue and frustration, and I sure understand people who disagree with policy… I just hope that people who are that passionate about things take time to cool down.” For a premier who has built his political brand in part on tough talk about environmentalists and Liberal governments in Ottawa, Kenney’s enduring weakness when it comes to COVID-19 scofflaws is puzzling.

Then again, given that a disproportionate share of those holdouts voted for the UCP in 2019, maybe it isn’t. His own caucus includes at least 17 MLAs who didn’t support the last round of restrictions introduced in early April, and almost certainly don’t include this latest one. And John Carpay, the president and founder of the Justice Centre for Constitutional Freedoms and a man Kenney once compared favourably to Rosa Parks, has been at the forefront of legal efforts to fight the ticketing and criminal prosecution of anti-mask protesters and holdout churches.

Kenney has tried to disavow himself and his party from the worst elements of the anti-mask community. "These people, we don't want people making death threats, people threatening to lock up Dr. (Deena) Hinshaw, people organizing rallies with Tiki torches based on the neo-Nazi rally in Virginia — those are not our supporters,” he said. But by choosing to repeatedly open the Pandora’s box of populist politics over the last few years, Kenney has unleashed forces he can no longer control. And if the thousands of Facebook comments on his most recent announcements are any indication, those forces are ready for a fight.

With a rising tide of vaccine doses now arriving in Alberta every week, the worst of the COVID-19 pandemic may yet be avoided. By this time next year, the events unfolding right now will have been forgotten — or at the very least, put behind us. But one thing will almost certainly endure: in a moment that called for the courage of Winston Churchill, Jason Kenney gave Albertans the cowardice of Neville Chamberlain instead.

My mother was a nurse, in the

My mother was a nurse, in the 1920's and 30's - virtually the dark ages of medicine - even before there were antibiotics!

She raised us right - we all got our vaccines as soon as they were available, and as pitifully few as they were.
She herself was born in the era of regular maternal deaths and her own mother died because of her birth. This was a curse that shaped her entire life.

The world's anti-vaxxers are living in a brain storm of fantasy. They need only visit some cemeteries dating back to the centuries before the 20th to see the hundreds of graves for children and adults who died prematurely. Had they lived - survived their deadly diseases - we probably wouldn't have this current plague of truly stupid anti-vaxxers - their ancestors would have taught them the value of avoiding preventable disease.

It is so unfortunate to have

It is so unfortunate to have Alberta as the neighbouring province of B.C. at this time of Pandemic threat to the health of everyone. A recent arrival from Calgary at the Comox Airport tested positive. The Health Authorities requested that all passengers on the flight complete a 14 day isolation program. I suppose it is impossible to expect our Premier to shut down all traffic coming into B.C. but can we not close our border to Alberta? I am constantly witnessing Alberta license plates on Vancouver Island which frankly angers me. We here are working hard to follow the "Pandemic Rules", well most of us are. It is disheartening to read in the newspapers of "positives" arriving at the local airport from Alberta knowing that that province has the highest rate of covid virus infections per capita in the country. I do not think Chamberlain was a coward but simply naive.

As an Albertan, I agree with

As an Albertan, I agree with you. Unfortunately some Albertans flaunt PHM and not out of ignorance but defiance. We’ve stayed at home and distanced, we’ve had our first vaccine shot as soon as available, we are willing to do this and more if it puts Covid in the rear view. I’ve been wearing PPE mandated by work environments my entire working life, I extend the PPE practice in my personal life, helmets, clothing, boots on etc on motorcycles ( I miss riding on BC roads) and seeing unmasked people leading their children in open defiance here in Medicine Hat of PHM puzzles and angers me. As an Albertan I stay out of neighbouring provinces until restrictions are lifted, but to be fair I do see BC plates everyday here too. Winston Churchill said that, “when you’re going through hell, just keep going” but even he would have said, stay the phuck at home.

The virus can't cross borders (and cannot spread) without the help of a host. It's as simple (and as complicated) as that. How can we control the virus without limiting movement?

I agree with your assessment

I agree with your assessment of Chamberlain, people who are quick to condemn him have the benefit of limited hindsight. At the time of the Munich agreement, the Great War had ended only 20 years earlier and was still fresh and raw in public awareness. For all the millions who had been slaughtered and buried in mud, several times that number had gone home blinded, maimed, with gas-burned lungs, pieces of their bodies ripped away by shrapnel, and psychologically crippled. It was said that there was hardly a family in Britain that did not suffer a human loss in that war, some every single male over 17. Chamberlain saw the Czech loss of the Sudetenland as the lesser of evils if it could thereby avoid the carnage of another war.
He made a bad choice, but not from cowardice.

This says it all: Kenney's

This says it all: Kenney's government arranged for taxpayers to fund the Whistle Stop Café’s legal fees??

What an insult to all Albertans who are complying with the common-sense public health rules.