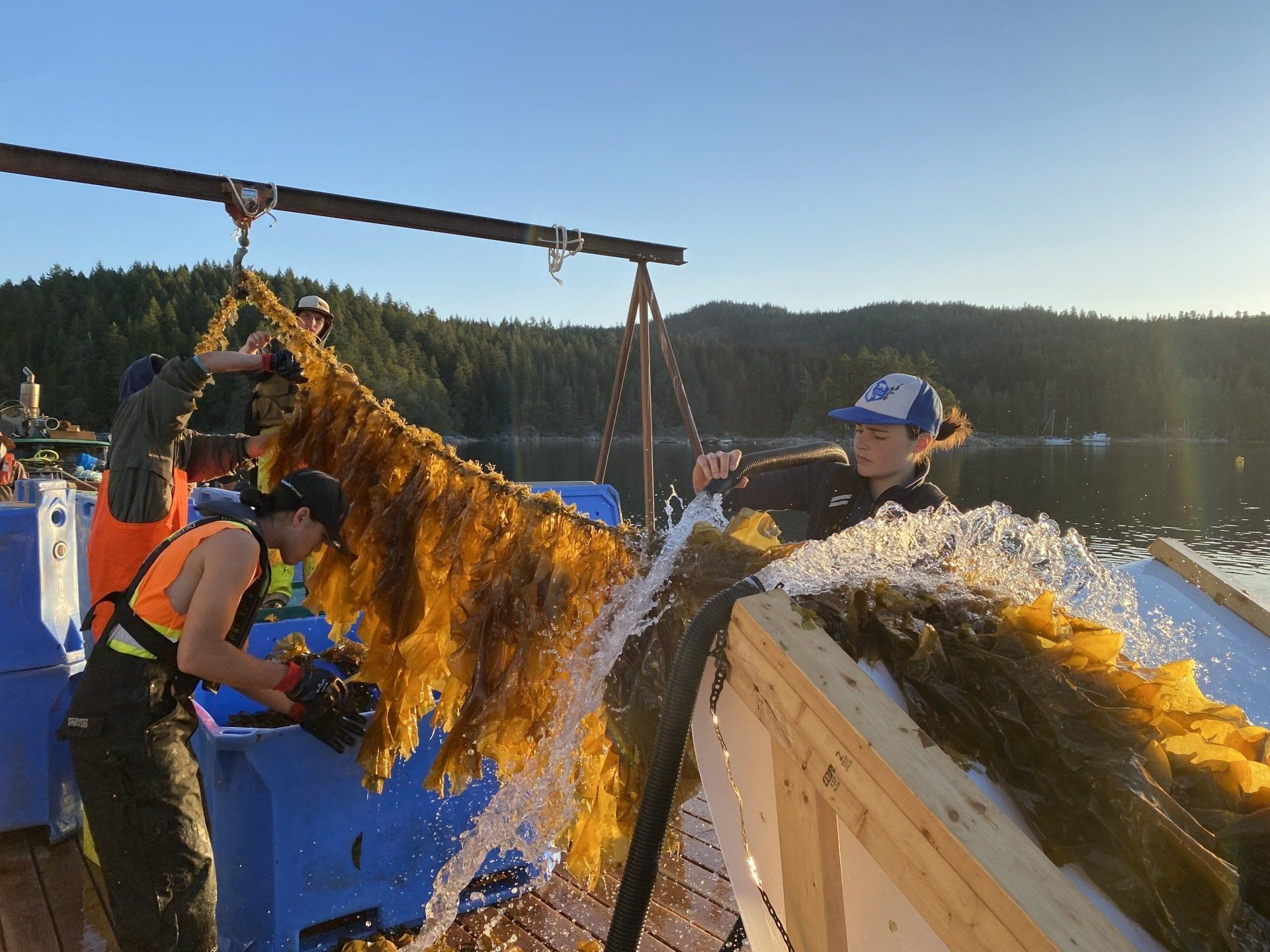 A small First Nation on the coast in B.C. is starting to reap the rewards of taking a risk on seaweed farming.

The Klahoose First Nation is among the first coastal communities to partner with Cascadia Seaweed in an attempt to scale up kelp aquaculture along the West Coast.

The partners seeded their first kelp lines at a couple Klahoose shellfish sites in the waters off Cortes Island in December.

And this April, a bountiful crop of sugar kelp was hauled out of the waters above the Klahoose's seabed geoduck operation, said Bruno Pereira, manager of the nation's economic development arm, the Qathen Xwegus Management Corporation (QXMC).

"We're really pleased. It grows like a weed," Pereira said, adding QXMC couldn't be happier with the fledgling operation and partnership.

"We anticipated a fast pace of growth because around Cortes, we have these amazing, amazing waters."

Cultivating seaweed allows the Klahoose to diversify economically, and make better use of its aquaculture assets in the short term, Pereira said. It also provides job opportunities for Klahoose members.

"I'm no scientist, but I understand seaweed is a critical player for (ecosystem) health and balancing the PH of water," he said.

Being at the forefront of the emerging seaweed farming movement is important to the Klahoose, which plans to expand its kelp operation over the next two years. #BC #Seaweed #Aquaculture

"It can help anything living in water, but in our case, why not give a little boost to our geoducks as well?"

The harvesting process involved long kelp lines being reeled out of the ocean around a large drum and onto a floating platform. A local crew then rinsed, cut and packed the wings of seaweed on ice for transport to neighbouring Quadra Island, where it was processed by Walcan Seafood — also a new player in the seaweed sector.

The high-quality winter crop will be dried and developed into a specialty food item by Cascadia, Pereira said.

And a test-run summer crop is being planned, he said. But warmer weather and waters tend to diminish the kelp's quality, so it's likely the next harvest will be used for secondary manufacturing in packaging, as a food or feed ingredient, or in cosmetics.

Being at the forefront of the emerging seaweed farming movement is important to the Klahoose, which plans to expand its kelp operation over the next two years, Pereira said.

"It really puts us in the conversation about where the sector is going, and that has a lot of value," Pereira said.

The Klahoose have been getting a lot of calls from sister nations interested in learning more about the industry, he said.

There won't be an immediate return on investment, but the capital costs for platforms, lines, floats and anchors associated with kelp farming aren't excessively high compared to other ventures, he added.

"But it has increased jobs, and diversifies our aquaculture portfolio, and is sustainable," Pereira said.

"And there's definitely a worldwide movement towards seaweeds, so there are a lot of positives."

Seaweed cultivation is a growing trend on Canada’s West Coast

Canada's oceans on the crest of a transformative decade