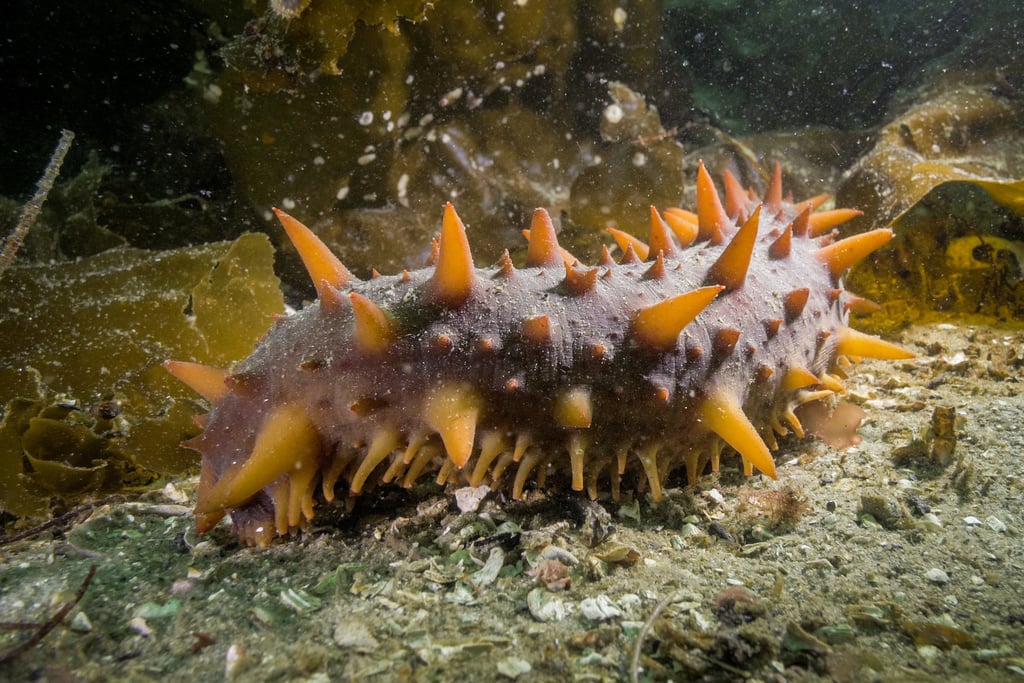 The giant red sea cucumber, abundant in B.C. waters, may be a way to hoover up the waste from commercial fish farms. iNaturalist photo by Grant Callegari (CC BY-NC 4.0)
Previous story
Next story

Most coastal residents are suitably enthralled with charismatic or charming marine animals such as killer whales, the iconic Pacific salmon or furry sea otters.

But what of the lowly sea cucumber?

It’s likely most people don’t give much thought to the fairly ubiquitous and possibly misunderstood invertebrate, said scientist Emaline Montgomery. Montgomery and other researchers on the West Coast of Canada are exploring how some unsung heroes of the seabed may be the ticket to a more sustainable form of aquaculture.

Apostichopus californicus, or the giant red sea cucumber, is a slightly alarming, spiky, squishy creature that can grow 50 centimetres long and sustains itself by eating detritus off the ocean floor and using its butt to breathe.

But it’s the sea cucumber’s ability to remove excess organic matter from surrounding water and sediment that makes it interesting for aquaculture, said Montgomery, a research associate and instructor at North Island College (NIC).

Montgomery’s research focus is on the co-cultivation of various species together to improve the sustainability and profitability of aquaculture.

The aim of regenerative aquaculture is to mimic the natural food web to both improve marine ecosystem health and increase the number of products that can be grown at one site.

The giant red sea cucumber is an attractive candidate for co-cultivation because it hoovers up deposits off the sea floor, and it can fetch a good price in international markets, said Montgomery.

Apostichopus californicus, or the giant red sea cucumber, is a slightly alarming, spiky, squishy creature that can grow 50 centimetres long and sustains itself by eating detritus off the ocean floor and using its butt to breathe.

“I think of them as nature’s recyclers,” she said, adding sea cucumbers don’t need to be fed, as they extract what they need from their surroundings with a set of specialized tentacles.

“It’s why sea cucumbers are so valuable,” she added.

“They're able to consume the waste products, either excess food or feces that are being produced by shellfish or fin fish, and they're able to take that organic material, assimilate it, use it for their own nutritional benefits.”

And what the sea cucumber spits out the other side of its digestive system has less impact on the marine environment, Montgomery said.

Plus, sea cucumbers have long been a highly valued food item with sought-after health benefits in Asian markets, she said.

Montgomery is working with shellfish growers to find cheap, easy-to-use containment systems to raise shellfish and sea cucumbers together to increase growers’ incomes.

But this spring, she is also slated to begin research with Fisheries and Oceans Canada to examine the commercial feasibility of raising sea cucumbers in conjunction with salmon farms.

“One of the questions that we're going to be looking at is whether there are any risks to the salmon or the cucumbers from each other,” Montgomery said.

When grown solely on the sable fish waste sediment, juvenile sea cucumbers showed good growth and survival rates and reduced the organic carbon and nitrogen content in byproduct materials by 60 per cent.

“But nothing's been done at a large enough scale to determine if this is feasible to integrate with our current industries or not,” Montgomery said.

“That's one of our goals, over the next year.”

The scientist said she first became entranced with studying sea cucumbers in university.

“What I discovered is this organism that looks like a blob, and might be written off by a lot of people, actually has a lot of complexity,” Montgomery said.

Besides their interesting qualities, sea cucumbers have a lot to offer ecologically, she said.

“But there is also a king of missing opportunity in Canada to grow these species where there are really good markets,” Montgomery said, adding both the economy and the environment stand to benefit.

“Some of the (aquaculture) practices we already have in place are experiencing a lot of criticism,” she added.

“If we can continue to improve that, I think it’s good for all Canadians.”