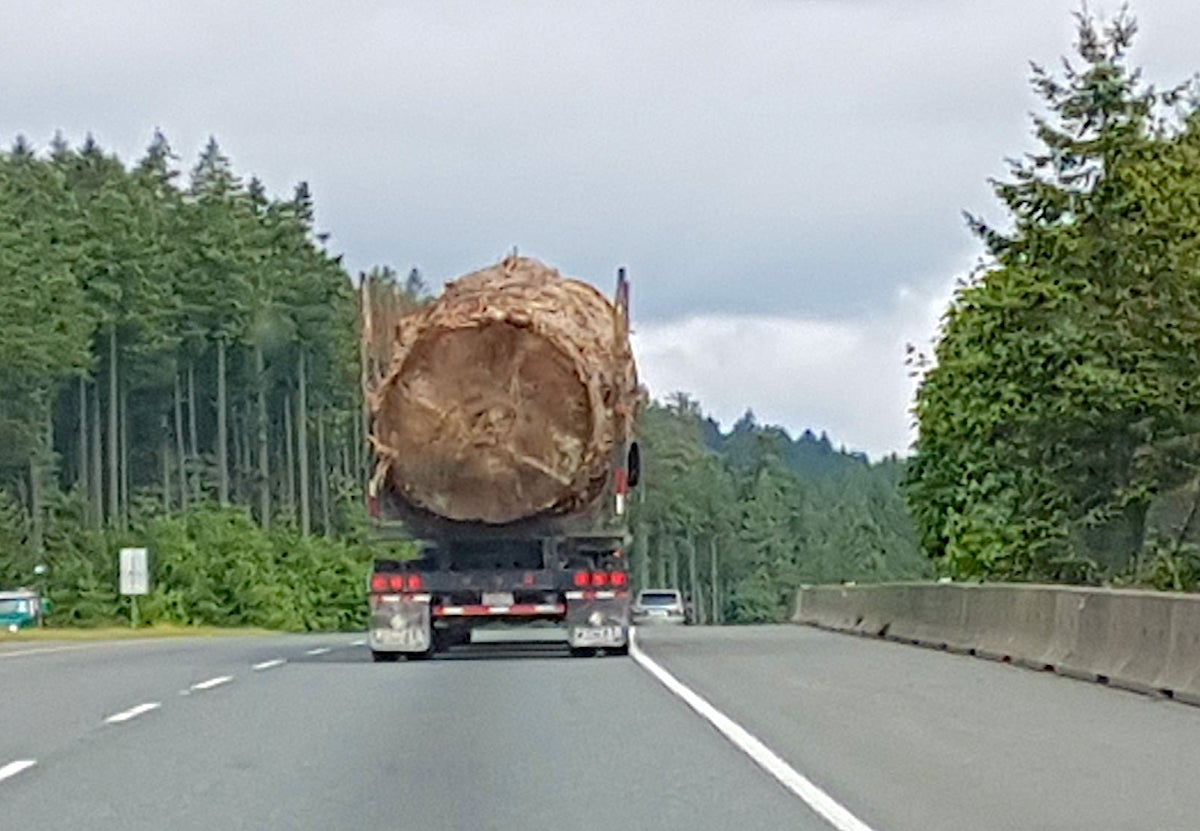 The B.C. government is misleading the public when it suggests the massive old-growth tree on a truck that has created a social media storm wouldn’t be logged today, says a conservationist group.

A photo of an enormous, single Sitka spruce weighing down a logging truck on Vancouver Island taken by Nanaimo resident Lorna Beecroft provoked outrage and shock across the internet this week.

In statements to media, the Ministry of Forests suggested the massive Sitka log in the viral photo was cut before new big-tree regulations came into effect and might well be illegal to harvest today.

Yet it’s almost certain the forest giant being hauled down the highway was still not large enough to be protected under B.C.’s Special Tree Protection Regulation established in September 2020, said Jens Wieting, Sierra Club BC’s senior forest and climate campaigner.

“That Sitka is a shocking example of the size of ancient trees that can still be logged today,” Wieting told National Observer Friday afternoon.

“We have repeatedly pointed out that this regulation was designed to make sure it doesn’t significantly impact industry.”

A Sitka spruce like the one at the centre of the controversy, no matter the region, is currently only protected if it has a diameter of 283 centimetres or greater at breast height, he said.

And the maximum width of a standard-size logging truck is typically 260 centimetres, suggesting the massive tree aboard the truck in the photo is actually smaller than what can still be legally harvested, he added.

The maximum-diameter size of the tree regulations, which vary by tree type and some biogeoclimatic zones, is still not strict enough to protect ancient trees, or the remaining three per cent of B.C. old-growth forests capable of supporting them, he said.

“All the values in the table with the 11 tree species have been chosen to ensure there's only a very small number of trees can ever be found to be big enough for protection,” Wieting said.

A photo of a massive Sitka spruce on a logging truck went viral this week. Despite the B.C. Ministry of Forest's comments, Sierra Club BC says the giant tree is still not safe under B.C.'s new big tree protections. #OldGrowth #BCpoli

The controversy over the big tree on the truck is taking place against the backdrop of spiking tension and arrests, as old-growth activists continue to blockade logging operations in the Fairy Creek and Caycuse watersheds in southwest Vancouver Island near Port Renfrew.

The RCMP had arrested 137 people, at least nine of whom were previously arrested, as of Friday evening.

Beecroft took the photo because she was shocked by the size of the tree being transported.

“It was such a reality check, to see literally in my face what the blockades were fighting for,” she said Friday.

“It’s astonishing to see how far this (photo) has gone and is resonating around the world.”

The post had been shared and commented on by people from countries such as Germany, Australia, Indonesia and Mauritius, Beecroft said.

“It boggles the mind,” Beecroft said.

“The story of the plight of these trees is receiving international attention.”

The Ministry of Forests was not immediately available to provide comment late Friday afternoon before publication deadline, but any response will be included in an updated story.