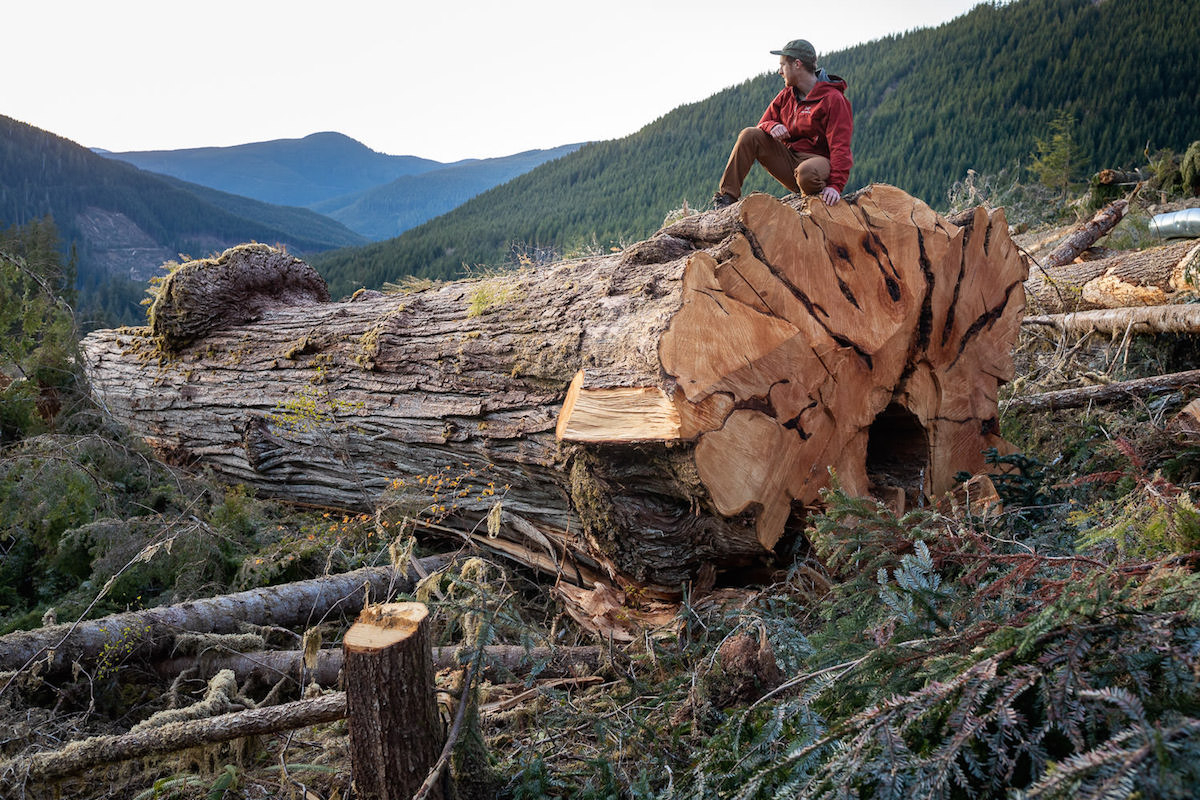 The B.C. government is failing to enact recommendations to protect large old growth trees like those pictured above in a Vancouver Island cut block. Photo by TJ Watt
Previous story
Next story

Premier John Horgan is getting failing grades when it comes to protecting B.C.’s old-growth forests, according to a report card issued by a coalition of environmental groups on Thursday.

The report card evaluates the province’s progress at the six-month mark after its promise to act on 14 recommendations outlined in a report that followed a strategic review of B.C.’s old-growth forestry practices.

Most urgently, the province grades poorly around the call to take immediate action to protect at-risk old-growth and stem the loss of rare ecosystems, said Andrea Inness, a campaigner with the Ancient Forest Alliance (AFA), which issued the report card along with the Wilderness Committee and the Sierra Club BC.

“They committed to act immediately to temporarily halt logging in the most endangered old-growth forest ecosystems,” said Inness.

“The province still has a very, very long way to go to actually implement that critical recommendation.”

When the government announced it would adopt a new approach to old-growth management in September, it temporarily deferred logging in 353,000 hectares of forest in nine regions until a new plan was developed.

However, various environmental groups and reports have questioned how much of the government’s deferred areas actually included at-risk, high-value, old-growth ecosystems, Inness said.

“Those deferrals were highly problematic,” she added, noting the most at-risk areas of old-growth valued in terms of biodiversity were not protected.

“They've really exaggerated that a lot to make it sound like they've done more than they have,” Inness said.

Only about 415,000 hectares of old-growth forest with big trees remain in B.C., mostly without protection, according to an independent report. #biodiversity

Much of the forested areas covered in the government’s deferral fell within a number of parks, ecological reserves, or included already existing deferrals or poor grade timber and low-value ecosystems not at risk of logging, Inness said.

Only about 415,000 hectares of old-growth forest with big trees remain in B.C., mostly without protection, according to an independent report, said Inness said.

“We try to look at this data and have determined that only 3,800 hectares of that 353,000 deferral was actually previously unprotected high-risk old-growth forests,” Inness said.

As such, clear-cutting will continue in critical old-growth stands — such as the Fairy Creek watershed on Vancouver Island — destroying their bio-diverse ecosystems forever, she said.

Activists blockading logging activity in the Fairy Creek watershed near Port Renfrew for the last seven months got a temporary reprieve after an injunction hearing to oust them was adjourned last week.

“It would send a very strong signal if Premier Horgan announced within this three-week timeframe that (government) is going to set that forest aside,” Inness said.

“Because, that would be consistent with what he's promised to do.”

The report card suggests that the province is also failing to adequately chart a new forest approach that prioritizes the integrity of ecosystems and biodiversity as called for by the review plan.

During the October election, the NDP election platform committed to meeting the old-growth strategic review recommendations and protecting more old-growth forests — in addition to the original deferral — in collaboration with First Nations, labour, industry and environmental groups.

And the province also committed to protecting up to 1,500 individual, giant and iconic trees as part of its special tree regulations when announcing its forest deferrals.

While the government has initiated conversations with First Nations around old-growth forestry, other steps need to be taken to fulfil the old-growth recommendations, Inness said.

The new B.C. budget is slated for April and the province should commit funds to support First Nations experiencing economic losses due to forestry deferrals or when choosing to protect ancient forests, she said.

“Until that economic piece is addressed, it could be very difficult for First Nations to agree to temporarily halt logging or permanently protect old growth in their territories if there aren't alternatives,” Inness said.

Additionally, the province has failed to tie its implementation promises to any timeline, nor has it signalled whether it’s on track to come up with a provincial transition plan within the next six months that prioritizes ecosystem health as promised, she said.

Should the government make good on its promises to enact old-growth strategic review recommendations, it involves a complete paradigm shift in the way forests are managed, Inness said.

“It means putting biodiversity and ecosystem integrity ahead of timber supply,” she said.

“But (the province) isn’t showing that they understand that. In fact, it feels more like they want to maintain the status quo.”

Comment from the office of the B.C.'s Ministry of Forests, Lands, Natural Resource Operations and Rural Development was unavailable before the National Observer's publication deadline.