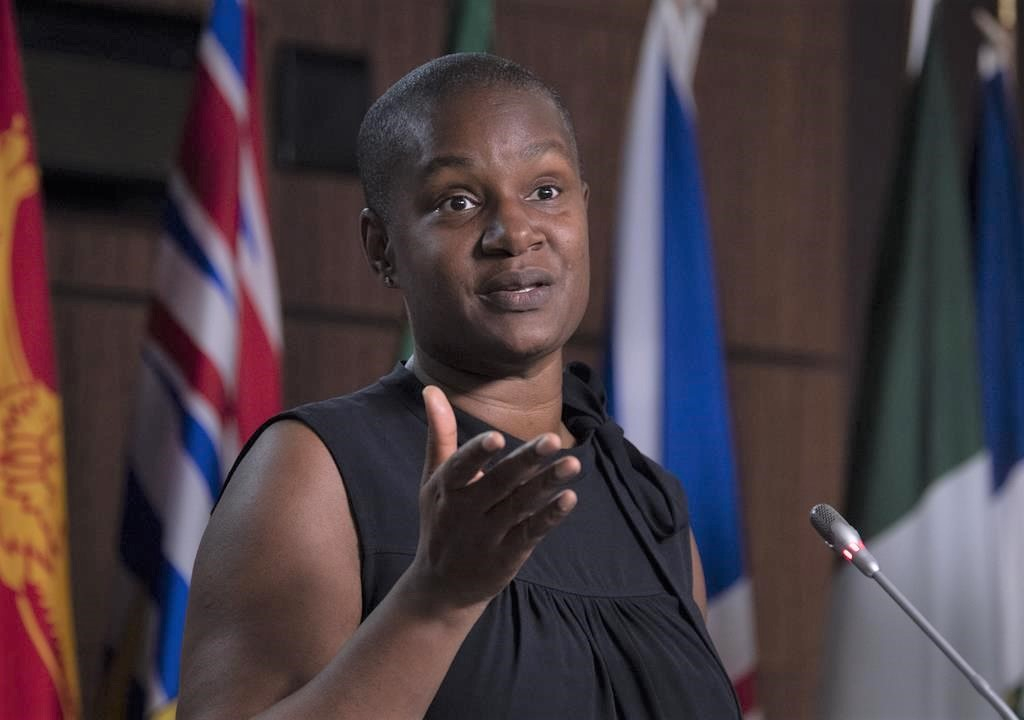 Green Party of Canada Leader Annamie Paul responds to a question from a reporter during a news conference in Ottawa, Thursday March 11, 2021. Photo by: The Canadian Pres/Adrian Wyld
Previous story
Next story

OTTAWA — Green Party of Canada Leader Annamie Paul says important climate legislation is failing to get the scrutiny it deserves because the Liberal government and NDP are ramming it through Parliament.

Paul accuses the two sides of striking a deal to ensure the passage of Bill C-12, which promises more accountability around Canada's goals to reduce its carbon-related emissions.

If passed, the legislation would require Canada to set rolling, five-year targets to cut greenhouse gas pollution until 2050, the date Prime Minister Justin Trudeau has set for the country to achieve net-zero emissions.

New Democrats pledged their support for the bill to get to the Senate after saying the government accepted its suggestions requiring it to do more reporting on the progress made up until 2030.

The NDP has said the Liberal piece of legislation is too important to let fail and that climate accountability has been a priority since the leadership of the late Jack Layton.

But Paul says the current bill falls short of similar measures other countries have put in place.

She says these include a "hard" emissions-reduction target within five years of a bill's passage, and the introduction of a "carbon budget" for how many tonnes of greenhouse gas emissions can be released during that time.

"There have been no Indigenous witnesses, no climate scientists and no young climate advocates who have had the opportunity to testify," Paul said during a news conference Monday.

She also underscored how more review is needed, saying, "We are one of the top five worst greenhouse-gas polluters per capita in the world. We have the worst record in the G7."

The Greens have so far voted against the Liberal legislation, as have the Conservatives, who say the influence of "climate activists" on an government-appointed advisory panel could harm the oil and gas sector.

Parliamentarians are set to discuss the bill at a committee later Monday and vote on proposed amendments.

Although both the Greens and Conservatives accuse the government and NDP of rushing the bill, the environmental law charity Ecojustice welcomes the collaboration.

In a statement, it says it plans to look carefully at the bill, but believes by parties working together the law could be strengthened so that Canada can actually meet its climate goals.

By 2030, Trudeau has committed the country to reducing its levels of greenhouse gas emissions by between 40 to 45 per cent below 2005 levels at a recent summit with other world leaders, where some also unveiled renewed goals.

The Liberal government says it's currently on track to slash this pollution by 36 per cent and needs to come up with a plan detailing how more will be cut over the next nine years.

Environment Minister Jonathan Wilkinson says ultimately, keeping the Canadian government accountable for meeting its climate goals is up to voters "if Canadians care about climate change."

“What this bill does is it essentially makes very public the work that governments are doing to achieve the climate target and move us towards net-zero by 2050. It makes it very public, given that you must report on progress, you must actually update your plans if you’re not on track," he said in a recent interview.

“And essentially, it ensures that all future governments will actually have to be very transparent to the will of the electors.”

This report by The Canadian Press was first published May 31, 2021