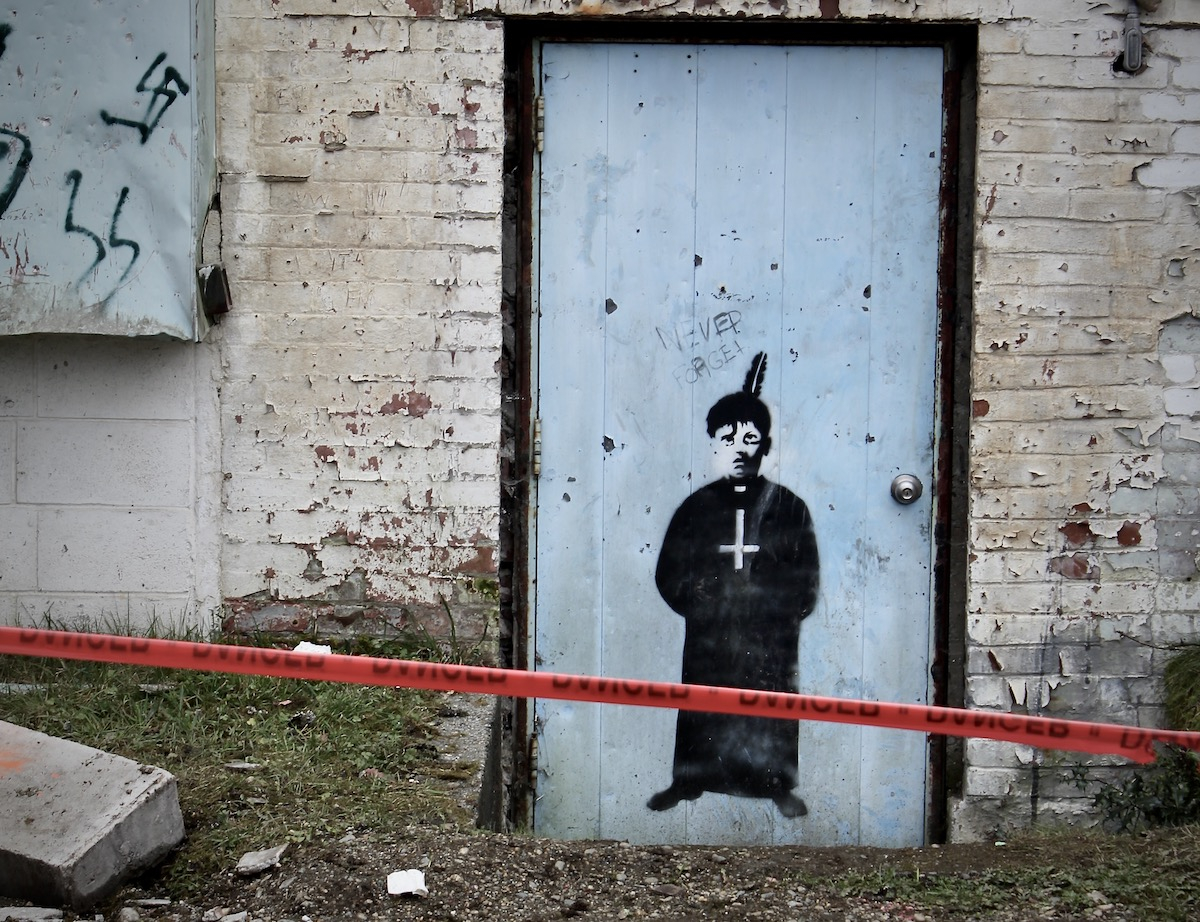 Shockwaves of grief are hitting Indigenous communities after the unmarked graves of 215 children were located at a former Kamloops residential school. Photo by Rochelle Baker: A child's image on the former ruins of St. Michael's residential school.
Previous story
Next story

Warning: This story contains details that may provoke distress or trauma in some readers.

Despite the pain of remembering, We Wai Kai elder Alberta Billy is both fragile and fierce in her determination to help honour 215 children confirmed to be buried in a grave site at a former residential school in Kamloops, B.C., late last week.

The Catholic facility was the largest in the Indian Affairs residential school system, populated with children forced away from their families from across B.C. or even other provinces.

The children may lie in Tk’emlúps te Secwépemc territory, but their loss and the shockwaves of grief and pain are being experienced by every single Indigenous person and community across Canada, Billy said.

“I’m sad,” said Billy from her home in Yaculta, or Cape Mudge Village, on Quadra Island.

“Our people need healing. And the way I can heal myself is to make sure that every single person understands what happened to our children and families.

“We have to make sure it never happens again and to understand we are a strong, spiritual people who have a connection with the Creator and our lands.”

A forerunner in the decades-long movement for reconciliation and holding churches accountable for their role in residential schools and the trauma they inflicted, 79-year-old Billy says the news out of Kamloops demonstrates the work for justice is truly just starting.

On oxygen and fighting pneumonia, Billy pauses regularly to catch her breath from the strain of speaking.

"These tragic happenings are still engraved in our minds, our bodies, our soul and our spirit,” said We Wai Kai elder Alberta Billy, days after the bodies of 215 Indigenous children were confirmed at a residential school in Kamloops, B.C.

“I think it's important that we talk about it because this will be only one of thousands of grave sites. They've got to be all across Canada," Billy said.

"And the government and churches must own what they did. It was a criminal act and a form of genocide."

“We had a knowing in our community that we were able to verify, Casimir said. “To our knowledge, these missing children are undocumented deaths.”

The preliminary details of the unthinkable loss were confirmed through ground-penetrating radar, which will be used to canvas more of the grounds of the school, the Kukpi7 said.

“Some were as young as three years old,” Casimir said of the children discovered.

“We sought out a way to confirm that knowing out of deepest respect and love for those lost children and their families, understanding that Tk’emlúps te Secwépemc is the final resting place of these children.

“The true accounting of the missing students will hopefully bring some peace and closure to those lives lost and their home communities.”

More than 130 government-funded, church-run residential schools were established to sever children from their families, and assimilate and shame them for their culture, language and spirituality.

In the meantime, more than 150,000 First Nations, Métis and Inuit children attended the schools, according the Truth and Reconciliation Commission of Canada (TRC).

Many of the children sent to residential schools never returned home. Some died at the schools, and some ran away; many parents and families often didn't know what had happened to their children or loved ones.

To date, 4,100 children’s deaths have been documented by the TRC’s Missing Children Project.

The system was designed to break First Nations communities and families, said Billy, noting a number of residential schools existed on the B.C. coast, including the Christie Residential School on Meares Island west of Vancouver Island and St. Michael's Indian Residential School in Alert Bay on Cormorant Island.

“What they did was send the children as far away from home as they could to these schools, so that there wouldn’t be a connection with parents or siblings,” Billy said.

“We have always held our children as sacred and everyone took care of them,” she added. “We wanted them to be safe and happy children growing up, and we were that way before contact.

“They ruined the family structure.”

Prime Minister Justin Trudeau said Monday he plans to meet with cabinet and work with other provinces to provide more support to discover the truth and for reconciliation.

"We are looking for how we can support Indigenous communities in their grief and in their request for answers," Trudeau said, adding there will be many immediate discussions about how to do that.

"I think a proposal around a standardized approach makes a lot of sense," Trudeau said of the federal government leading the search for and documentation of grave sites associated with residential schools.

"But of course, we will work with the provinces and territories to make sure that we're all doing the right thing."

Federal MPs unanimously agreed to end debate and fast-track Bill C-5 for consideration by the Senate on Friday afternoon.

The bill calls for a national day for truth and reconciliation. If passed, the statutory holiday would commemorate the victims and survivors of residential schools on Sept. 30.

Government and churches must do more than simply apologize by reading words from a page, rather than speaking from the heart, said Billy.

"These tragic happenings are still engraved in our minds, our bodies, our soul and our spirit,” she said.

In 1981, Billy stood before the United Church executive council and requested it apologize to Indigenous people for the harms done by residential schools. The United Church did so five years later, said Billy.

However, Canada did not officially recognize the damage until then-prime minister Stephen Harper apologized in 2008. And not much has been achieved by churches or government in three decades, Billy said.

“We need to heal. In this lifetime,” she said, adding only the initial steps have been taken.

"When are they going to act upon helping?" Billy asked.

"They haven't done anything significant. If they have, I'd like to know what it is."

In addition to funding the search for other graves and the truth, there must be restitution and support, so First Nations can gather collectively to mourn and resolve the trauma, she said.

"I'm exposing all this sadness so that people can come forward and talk about what happened, so that healing can come from trauma," Billy said.

"I want them to understand that nothing was ever their fault."

Thank you for giving us the

Thank you for giving us the words of one of our wisest elders. Alberta Billy is a force for such good in this country. May we all listen with care.

Thanks Donna, I agree.