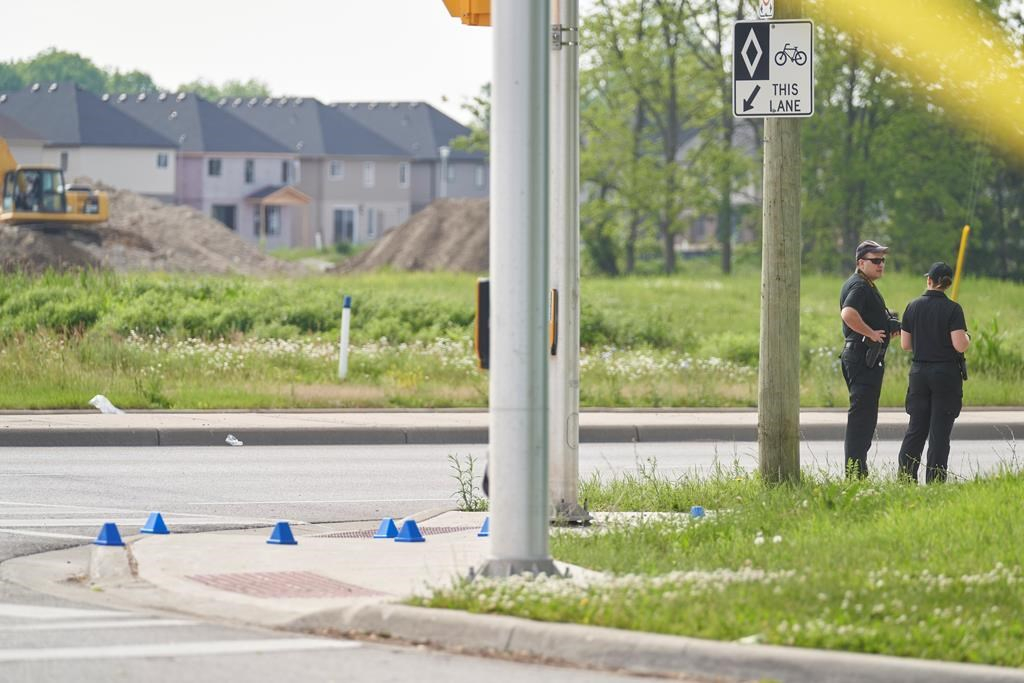 London Police investigate the scene of a car crash in London, Ontario on Monday, June 7, 2021. Photo by: The Canadian Press/Geoff Robins
Previous story
Next story

LONDON, Ont. — A family of five Muslims out for an evening early summer stroll were mowed down by a driver in an "act of mass murder," the mayor of London, Ont., said on Monday.

The horrific incident on Sunday evening left four of them dead and a boy with serious injuries, police said.

"Words fail on a day as dark as this but words matter," Mayor Ed Holder said. "This was an act of mass murder perpetrated against Muslims, against Londoners, and rooted in unspeakable hatred."

A 20-year-old city man was arrested in the parking lot of a mall seven kilometres away. He now faces four counts of first-degree murder and one of attempted murder, police said.

Police Chief Steve Williams said relatives had asked no names be released but identified the four victims as a 74-year-old woman, a 46-year-old man, a 44-year-old woman and a 15-year-old girl. A nine-year-old boy was in hospital in serious condition.

"We believe that this was an intentional act and that the victims of this horrific incident were targeted … because of their Islamic faith," Williams said. "All of the victims in this matter are members of the same family."

Det. Supt. Paul Waight said the family was waiting to cross the road at an intersection on a dry clear day in the city's northwest end when a black pickup mounted the curb, struck them, then sped off.

One woman who witnessed the aftermath of the deadly crash said she couldn't stop thinking about the victims. Paige Martin said she was stopped at a red light around 8:30 p.m. when the large, pickup flew past her. She said her car shook from the force.

“I was shaken up, thinking it was an erratic driver,” Martin said.

Four members of a #LondonOntario family are dead after being deliberately struck by the driver of a vehicle. #hatecrime #Muslim

Minutes later, she came upon a gruesome scene at an intersection near her home: First responders in full sprint, a police officer performing chest compressions on one person and three others down on the ground.

A few dozen people were on the sidewalk, and several drivers got out of their cars to help.

“I can’t get the sound of the screams out of my head,” Martin said.

From her apartment, Martin said she could see the scene, watching an official drape a sheet over a body at about midnight.

Police said one woman died at the scene. The second woman, the man and the teen died in hospital. The child was expected to survive. Autopsies were scheduled for Tuesday.

Zahid Khan, a family friend, said the three generations of victims comprised the grandmother, father, mother and teenage daughter. The family had immigrated from Pakistan 14 years ago and were dedicated, decent and generous members of the London Muslim Mosque, he said.

“They were just out for their walk that they would go out for everyday,” Khan said through tears near the site of the crash. “I just wanted to see.”

Qazi Khalil said he saw the family last Thursday when they were out for their nightly walk. The families lived close to each other and would get together on holidays, he said.

“This has totally destroyed me from the inside,” Khalil said. “I can’t really come to the terms they were no longer here.”

The National Council of Canadian Muslims said it was beyond horrified, saying Muslims in Canada have become all too familiar with the violence of Islamophobia.

"This is a terrorist attack on Canadian soil, and should be treated as such,” said council head Mustafa Farooq. "We call on the government to prosecute the attacker to the fullest extent of the law, including considering terrorist charges."

Williams acknowledged the tragedy might stoke fear and anxiety, especially among Muslims or others targeted by hate.

"There is no tolerance in this community for individuals who, motivated by hate, target others with violence," Williams said.

About a dozen police officers searched the crash scene on Monday as they combed the area looking for evidence.

Blue markers on the ground dotted the intersection and officers were performing line searches for several hundred metres in the field next to the sidewalk.

Police were asking anyone with possible information about the incident to contact them.

Holder said flags would be lowered for three days.