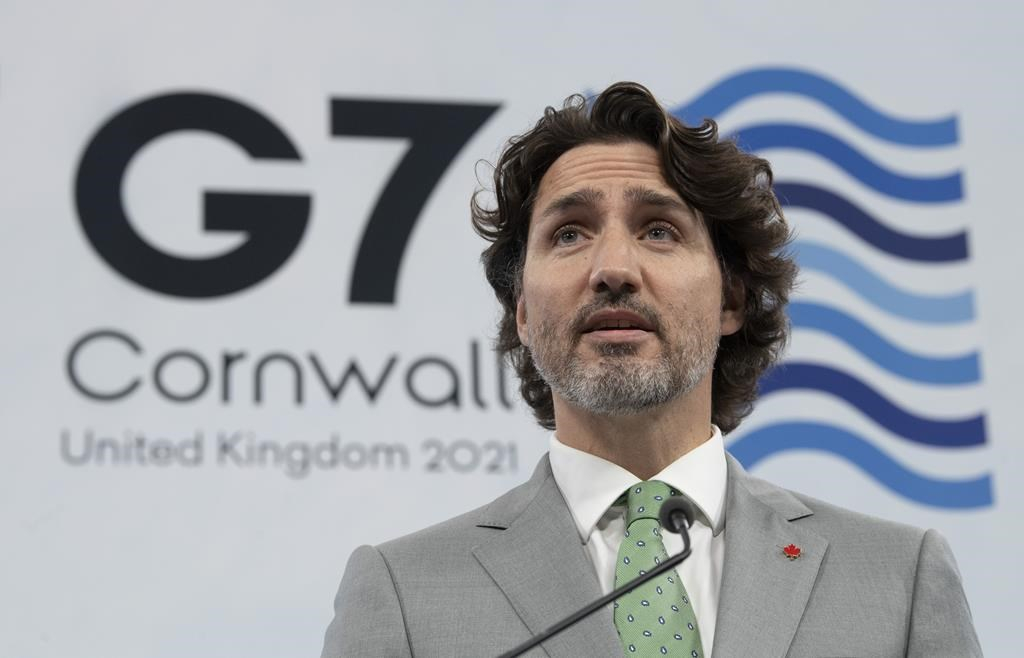 Prime Minister Justin Trudeau is joining a meeting of the North Atlantic Treaty Organization with Canada reiterating its broad support for Ukraine, but not whether it will back a move by Kyiv to join the military alliance amid tensions with Russia.

The federal government said last week Canada will continue to help address security threats in the region, but did not go as far as saying it would throw its unbridled support behind Ukraine's push for NATO membership at the summit.

Ukraine’s call to join NATO comes ahead of this week's first face-to-face meeting in Geneva between U.S. President Joe Biden and Russian President Vladimir Putin, after years of strained relations between Moscow and western nations.

Russia’s military buildup on Ukraine’s border, Moscow’s 2014 annexation of Crimea, alleged Russian interference in U.S. elections, and allegations that the Kremlin was behind the SolarWinds hacking campaign have all contributed to inflamed tensions.

Ukrainian President Volodymyr Zelensky has publicly lobbied to join the military alliance, raising the issue recently in separate discussions with Trudeau and Biden.

Asked specifically whether Canada supports Ukraine having a membership action plan from NATO, a Trudeau spokeswoman said there was nothing to add.

Earlier, Global Affairs Canada did not answer a specific question on Ukraine joining NATO, saying that Canada “remains unwavering in its support for Ukraine’s sovereignty, independence and territorial integrity, and the people of Ukraine." It also noted allies decided at the 2008 summit that Ukraine "will" eventually join the organization.

The Canadian government has in the past been an advocate of Ukraine joining NATO.

Trudeau pledges support for Ukraine, mum on support for next step in #NATO membership. #CDNPoli #Ukraine

At the time, Harper called on leaders to agree Ukraine be allowed to move along in the membership process and pledged that Canada would back the bid, so long as "the country keeps making progress on democratic reform and opening up its economy."

The party still holds that view, a spokesperson for Conservative Leader Erin O’Toole said in a statement.

Alexander Moens, director of the NATO field school and simulation program at B.C.'s Simon Fraser University, says the issue is "one would wish the Canadian government would speak a little bit more openly about."

He pointed to the fact there are one million people in Canada who are of Ukrainian descent, and noted that the country has been a supporter of Ukraine, including when it brought sanctions against Russia over its 2014 annexation of Crimea.

But at the same time, Moens says, Canada knows it needs to be sensitive.

"Ukrainian membership in NATO could very well be a red line for Russia, meaning a dangerous reaction by Russia, so there is a lot of caution on how to proceed," he said.

"The biggest issue here is how to not make the relationship with Putin worse and at the same time, not discourage the Ukrainians."

Seeing how NATO handles the matter and whether it moves any closer to Ukrainian membership is worth watching, he says, adding that allies are likely to tread carefully.

Allen Sens, a political-science professor at the University of British Columbia, believes the issue will be raised only out of politeness to Ukraine, but that it's largely "off the table."

"I can't imagine anything more provocative," he says.

Those include making progress on new strategic planning priorities and modernization. As well, experts say there will be a focus on tackling cybersecurity and information warfare, not to mention the challenges presented by Russia and more recently China.

They believe a defining characteristic of this year's summit will undoubtedly be a sense of renewal because of the absence of former U.S. President Donald Trump, who panned NATO's existence.

"Every member of NATO will remember that Donald Trump called the alliance obsolete," said Roland Paris, international affairs professor at the University of Ottawa.

"Having Joe Biden arrive at a NATO summit and express in unreserved ways the United States' commitment to its allies will be an important symbolic shift."

He added that "the legacy of the Trump years will continue in the sense that NATO members, particularly the NATO members in Europe, are aware of the fact the United States produced Trump … and could elect one again."

Can Justin Trudeau save NATO from 'brain death?'