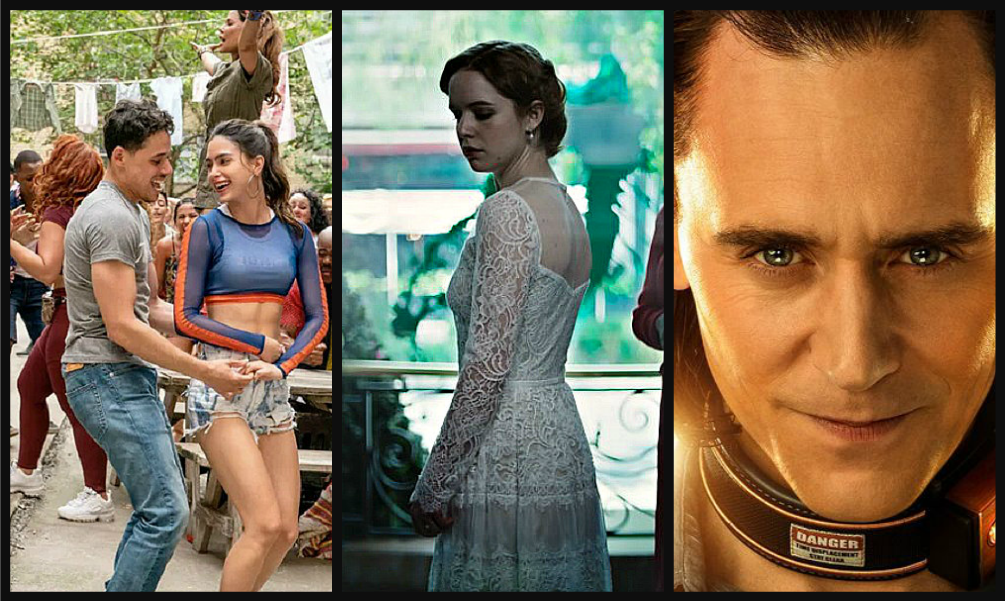 Also offer a travel mystery, a strange calamity and an ethics debate in a hospital
Previous story
Next story

I'm a few days late because of a computer crash but just in time for the theatres to open. Cineplex, Landmark and others in BC will be operating on Tues. and the Cinematheque starts Thurs. with some classics that were delayed by the pandemic. VIFF's VanCity theatre is waiting until July because its renovations are still in progress.

But finally the big titles will show where they're supposed to, including Godzilla right away and Peter Rabbit on Fri. Also A Quiet Place Part II, which I'll see tomorrow and In the Heights which I review today.

And don't forget Ryan Reynolds new one, The Hitman's Wife's Bodyguard which the critics haven't praised. In fact according to the BBC's choice of words, they've given it "a pasting."

The question of course is how willing will people be to sit in movie theatres again, even with the enforced seating limits on seats. Watching at home is so much easier and there are plenty of new titles available for that, as today's list shows.

IN THE HEIGHTS: The time is right for this kind of exuberance. The streets repeatedly get filled with people singing and dancing. There's a story wrapped around it of family issues and stresses in the neighborhood. Together they're great entertainment and eager to be seen on the big screen. (It's also streaming from services like Telus, Cineplex and Apple TV and that's OK but wouldn't give you all the dynamism it has to offer). Lin-Manuel Miranda created it before his smash hit Hamilton and with Quiara Alegría Hudes's screenplay and Jon M. Chu's direction gives us the best musical in years.

It's set in Washington Heights, the Latino neighborhood in the northern part of Manhattan, where Miranda grew up. He starred in the original stage version (which I was lucky to have seen in New York) and appears in a smaller role this time. Anthony Ramos has the main part as bodega owner Usnavi who is watching the area gentrifying (a dry cleaner now charges $9 a shirt) and dreams of going back to the Domincan Republic. An elderly woman he takes care of misses Cuba and the woman he has eyes for (Vanessa played by Melissa Barrera, formerly of Mexican telenovas) has money pressures at the salon she works at. And old friend, Nina, is back from university too scared to tell her parents she flunked out. A business owner (Jimmy Smits) is secretly working to sell out. That mixture of ambition and adversity drive the plot which is about neighborhood pride. A few new issues get a mention ("dreamers" for instance) but it's the infectious songs and energetic singing and dancing you're here for. You get lots of that. ( International Village, Marine Gateway and others) 4 ½ out of 5

NEW ORDER: Rich people's worst nightmare is on the screen in this film from Mexico. The poor are rioting, streets are blocked, the army won't let you through and while all that seems far away, it is not. Armed protesters come over the wall into a backyard where a fancy wedding is to take place. It's delayed because the judge is late. The invaders start shooting and the servants start stealing while the guests run for safety. Clearly the inequalities of the system have corrupted everybody, says the film written and directed by Michel Franco.

The father of the bride is a property developer. He and his wife do little to help an ex-employee who came pleading for money for his wife's heart surgery. Their daughter, the bride, takes pity, tries to drive to the woman's hospital but gets caught up in roadblocks and the chaos in the streets and is finally arrested and held in a huge enclave with hundreds of others. That takes us deep into the brutal bedlam where the army is worse than the rioters. There's graphic abuse and violence. It's a gripping portrait of extreme social unrest that doesn't blame or favor anybody but lays out what's possible. The acting is strong, the message is potent and the film is very good. (Now streaming at VIFF-Connect and available at on-demand and digital platforms like Apple TV and Google Play) 4 out of 5

LOKI: Marvel hasn't had a new movie in almost two years and Black Widow is still weeks away. But it's had two very hot short series on Disney+ and here's another which I think will be just as successful. Certainly the fans are bound to like it because it adds to the mythology that's been carefully shaped through many films and offers some new details about one of the most interesting characters. Loki is Thor's mischievous brother. You might remember in The Avengers: Endgame he ran off with that glowing cube called the Tesserat. This film follows immediately as Loki is caught by something called the Time Variance Authority and interrogated about his time-tripping actions.

Owen Wilson plays the interrogator, Tom Hiddleston is Loki and their confrontations are the highlight in the first of these six episodes. (More premiere every Wed. until mid-July). The TVA has to preserve the "sacred timeline" to avoid the chaos of competing multiverses. Loki must co-operate. So far we've retraced his backstory via video clips from the past, learned some details we haven't known before and received enigmatic hints of what's coming. He's not a dangerous variant -- just a "pussycat", he's told. Is he in an alternate universe himself? All we know for sure so far is that "time moves differently in the TVA." A lot of imagination is on display in this series, some of it a bit Dr. Who-like, as written by Michael Waldron (of the upcoming Dr. Strange sequel) and directed by Kate Herron from England. I'm looking forward to more. (Disney+) 3 ½ out of 5

A PERFECT ENEMY: Do you miss travelling? You might be less so after watching this stylish and very mysterious tale. An architect (German star Tomasz Kot) is on his way to the Paris airport after giving a speech about “perfection” when a young woman (Athena Strates) pleads to get a ride in his cab and get out of the rain. From then on he can't shake her. She's chatty, tells wild stories and since she made him miss his plane he has no choice but to listen. As they wait at the airport she reveals she'll be taking the same plane and you know something is amiss.

This is no coincidence, and it takes a while to learn how. But first there's ever-tightening suspense. She's spontaneous and impulsive. He's stuffy and orderly; “perfect” you might say. She says she has killed only two people in her life. Real? Nonsensical prattle? She also has a story about stalking a woman at a cemetary. He, who helped design an addition to the airport they're in, notices an odd red stain in a scale model. It's all very intriguing and in the hands of Spanish director Kike Maíllo works well to induce paranoia. Strates is terrific in her role. (Available at platforms like Apple TV and Google Play) 4 out of 5

LA DOSIS: This film from Argentina where it means “The Dose” could be a thriller but instead plays it softer to calmly consider the morality of assisted dying. It ends up not fully satisfying either purpose, maybe because writer/director Martin Kraut is making his debut at creating a full-length movie, after one short and other jobs in the industry. He creates atmosphere, gets good performances from his actors but doesn't turn up the tension enough. Being careful, perhaps.

A very stocky actor named Carlos Portaluppi plays Marcos a male nurse in a small hospital. In the first scene, he's the only one willing to keep trying and revive an old woman with heart failure. Then when the doctors won't make the effort to keep her alive, he injects her to end her suffering. The whole debate in one sequence.

It expands when a new male nurse (Ignacio Rogers) arrives, charms everyone with his enthusiasm, befriends Marcos and could be his rival for a promotion. Worse, deaths in the ICU rise and both men have to comply with an investigation. Marcos says what he did was out of pity; the new man is doing it for pleasure. A confrontation is inevitable, but the moral debate is left incomplete. (Available video on demand or digitally) 3 out of 5

AWAKE: How's this for a world-wide calamity? People can't go to sleep. A strange atmospheric event has knocked out all electronics and sleep. Interesting idea if you're brainstorming, but you need enough real story elements to turn it into a movie. This one has few. We later hear a solar flare caused it and that changed people's electro-magnetic wiring, affected their lymphatic system and "messed with our clocks." Oh yeah, all that. Along with all those improbabilities, there are inconsistencies and a vague ending.

While its basic premise is not convincing, the film does pretty well showing what could happen. People loot drug stores for sleeping pills. Cars don't work, but a few do and are hunted. Chaos is building, and we're told that without sleep, critical thinking goes in 48 hours, followed by hallucinations in 96 and then paralysis and death. Jennifer Jason-Leigh is a doctor studying an old lady who can sleep. Gina Rodriguez is a mother who's young daughter is also able to sleep and for some reason is taught to use a gun. The story strays far and wide. Barry Pepper as a pastor says he used to be a drug addict until he was called to God. Focus, people. Focus. (Netflix) 2 out of 5