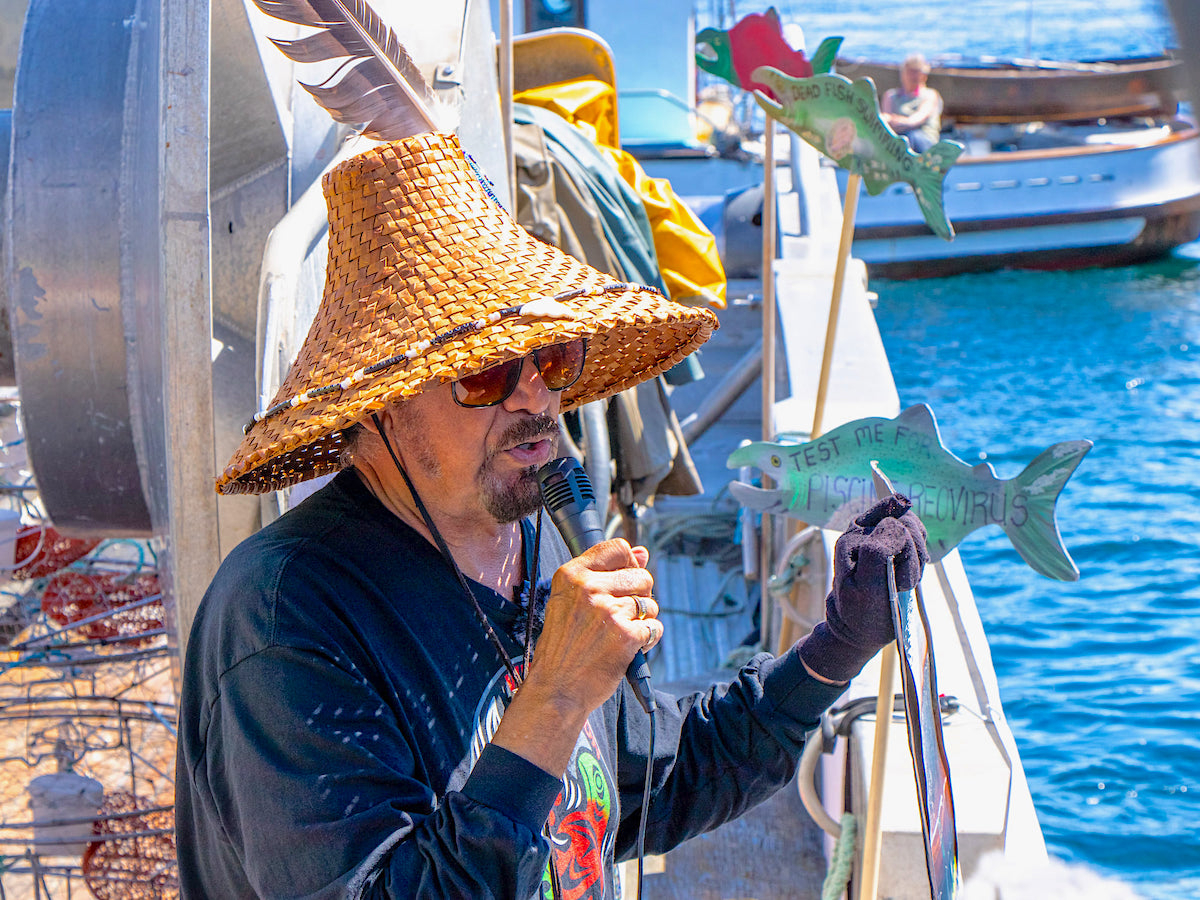 Hereditary Chief George Quocksister Jr. speaks at a protest flotilla at a Discovery Islands salmon farm in May calling on DFO to refuse permission to restock. Photo courtesy of Angela Koch
Previous story
Next story

The federal fisheries minister has denied an international aquaculture company the right to stock contentious fish farms in the Discovery Islands for a second time.

The Department of Fisheries and Oceans (DFO) has rejected two recent applications by Cermaq Canada to transfer 1.5 million fish to the company’s Venture Point and Brent Island sites following a decision by Ottawa last year to phase out salmon farms in the region by July 2022.

Minister Bernadette Jordan also denied Cermaq’s request to extend its current licences to operate the sites to February 2023 — beyond the deadline set by DFO last December.

The minister’s decision to refuse the licences follows a limited court victory by fish farm company Mowi Canada West in April that challenged Jordan’s ban on the restocking of new fish at sites set to be closed next year.

The court injunction ruled Jordan had to re-evaluate fish transfer applications by fish farms companies, but did not rule out her ability to refuse them.

“The decision to deny Cermaq’s applications regarding fish farms in the Discovery Islands was a very difficult one,” Jordan’s office said in an email to Canada's National Observer.

Jordan weighed the concerns and priorities from across the region when making the decision, the email said.

“It was made after careful consideration of multiple factors, including environmental and socio-economic concerns, as well as input from Indigenous communities and the aquaculture industry.”

Cermaq Canada, which had negotiated an agreement with the Wei Wai Kum First Nation around restocking the sites and licence extensions, is disappointed by Jordan’s decision, said the company’s managing director David Kiemele in an email statement.

“It displays a lack of acknowledgment of the rights of the Wei Wai Kum Nation to make decisions regarding their core territory,” Kiemele said.

“It prioritizes the protection of wild salmon stocks in B.C. that are certainly in an extinction spiral, and in need of every measure of protection possible,” says @1Bob_Chamberlin after DFO refuses restocking at two Discovery Islands fish farms.

“This decision is therefore not in line with the Liberal government’s public commitment to reconciliation and hinders the plans to increase shared value for the local communities, which is a primary concern for Cermaq in Canada.”

Jordan’s decisions prevent the humane grow-out of a final cycle of salmon that has been years in planning and was slated to go to the farm sites, Kiemele said.

The ban on fish transfers will also have social and financial implications for employees and dozens of local, independent suppliers, contractors, businesses, and service providers in the region, Kiemele said.

However, regional critics of the industry opposed to the transfers and any licence extensions launched a flotilla, accompanied by hereditary and elected chiefs, to protest at fish farms in the Okisollo Channel on May 23.

Many First Nations across the province are heartened and welcome Jordan’s recent decision, which supports her overall policy decision to remove open-net salmon farms in the Discovery Islands situated on the migratory path of juvenile salmon, said Bob Chamberlin, chair of the First Nations Wild Salmon Alliance.

“I’ve had emails from all across British Columbia from First Nations leadership that are very pleased with this decision,” Chamberlin said.

“It prioritizes the protection of wild salmon stocks in British Columbia that are certainly in an extinction spiral and in need of every measure of protection possible.”

Wild salmon are foundational to the food security of First Nations across the province, Chamberlin added.

“The dismal (salmon) returns impact our families, our communities, our aunties, our grannies and grandfathers who rely upon this traditional food source.”

When announcing the phaseout of the 19 fish farms in the Discovery Islands, Jordan said her decision was largely the result of consultation with seven First Nations whose traditional territories cover the region — including the Wei Wai Kum.

In response, the region’s aquaculture companies launched an ongoing court challenge to review the minister’s decision to close the salmon farms.

Way before the decision, the fish farms in the waters near the aquaculture hub of Campbell River on Vancouver Island were the subject of heated public debate and polarized scientific opinions about the harms the sites pose to declining wild salmon stocks from sea lice, disease and other pathogens.

Jordan’s most recent decision on the application for fish transfer does not apply to other farm sites or companies on the West Coast, the minister’s office said.

The ministry will continue to work with the B.C. government and all the key partners to ensure the province is a world leader in sustainable, environmentally responsible aquaculture, the ministry said.

“That includes finalizing our plan to transition away from open-net pens and developing Canada’s first-ever national Aquaculture Act.”