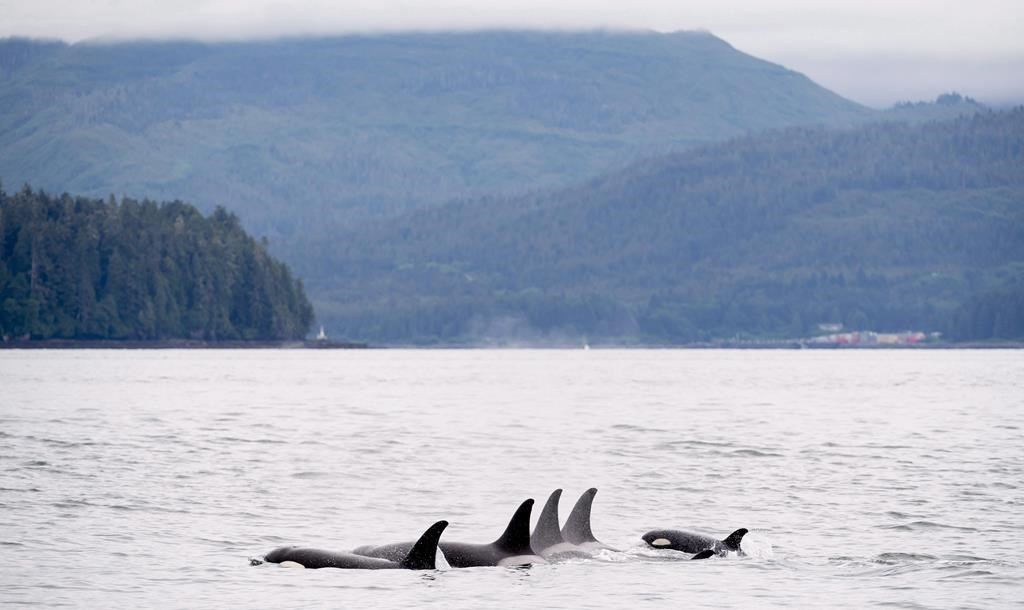 Endangered southern resident killer whales would have a much better chance of survival if chinook were in their hunting grounds during winter off the coast of British Columbia, a new study says.

The whales expand their menu and the distance they travel as they forage for food from October to March in the waters off California up to Alaska, which leaves them with little energy, says the study published Wednesday in the scientific journal Plos One.

Brad Hanson, a wildlife biologist with the U.S. National Oceanic and Atmospheric Administration, said this is the first study that looks at the diet requirements of killer whales from their perspective.

Hanson, fellow author Robin Baird and others collected and analyzed the prey and fecal samples of northern and southern resident killer whales for 13 years, starting in 2004.

They found that chinook salmon made up almost all of the whales' diet in spring but fell to around 70 per cent in mid-winter and plunged to about 50 per cent heading into the fall.

Baird said the animals supplemented their diet with coho and chum salmon, as well as other fish including lingcod, halibut and flounder, which are bottom dwellers.

Of all the fish in the sea, whales prefer chinook salmon because they are the largest, richest, most energy dense and easily intercepted, said Baird, who is a research biologist at Washington's Cascadia Research Collective.

"The whales have become these chinook specialists probably over tens of thousands of years because of the great availability of those fish," he said in an interview Wednesday.

"If the whales have to expend a lot more energy getting that prey then they basically get less bang for the buck."

The whales then don't have enough energy to store fat that helps them keep warm in the cold waters. This leaves them weak and unable to reproduce, he said, adding most mothers are not able to feed a calf even if they do give birth.

"Reproduction of southern residents is directly or indirectly related to chinook abundance," he added.

Chinook populations have fallen dramatically over the last 100 years by human actions including farming, the construction of dams, industrial activity and the destruction of estuaries, he said.

All 14 stocks of chinook salmon that are preferred by whales are threatened, he said. These fish would move in and out of inshore waters at different times of the year and ensure a steady supply of food for the orcas.

"Let's say, just for sake of argument, there was one river that had 100 million chinooks that all came back during the same time of the year," Baird said. "That's going to be a lot less beneficial to the whales than 100 rivers, each of which have a million chinook and those chinooks all come back at different times of the year."

One way to ensure a steady chinook supply for orcas is to catch fish at the mouths of rivers after they've passed through areas where whales forage, he said.

"Unfortunately, there is no one simple solution."

Killer whales are top predators, which means they are often ecosystem indicators, he said. A reduction in the southern resident killer whale population is indicative of a degraded environment, which affects everyone, he said.

"So, I think that killer whales are an indicator," Baird said. "And the big question is whether or not we're listening."