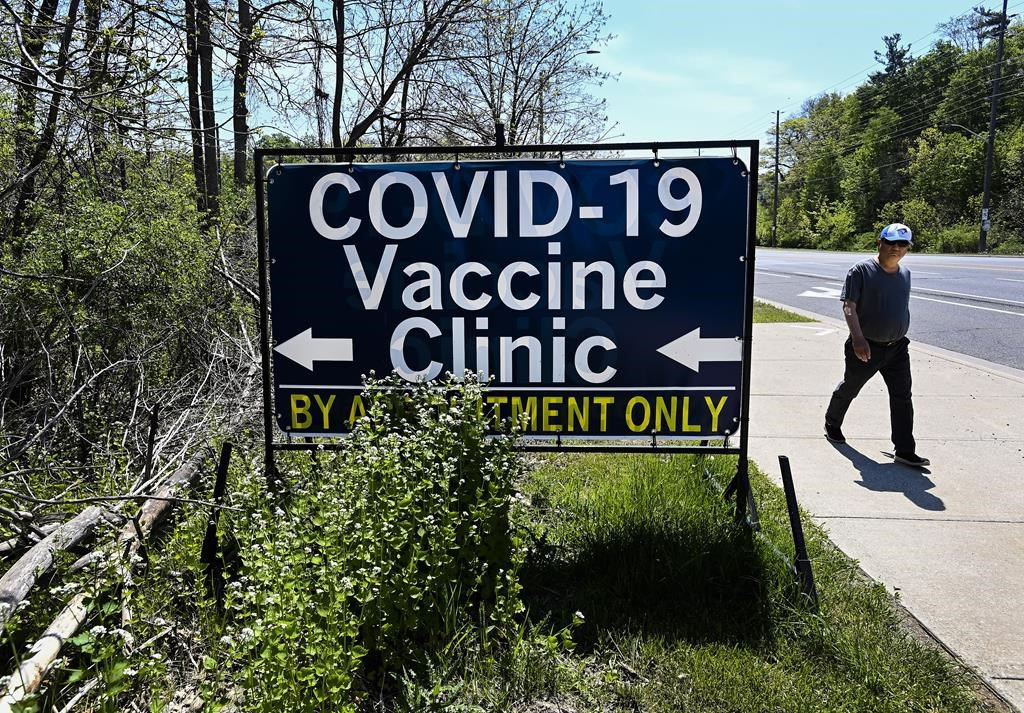 A man makes his way past signage to a mass COVID-19 vaccination centre at the University of Toronto's Mississauga campus during the COVID-19 pandemic in Mississauga, Ont., on Monday, May 21, 2021. Photo by: The Canadian Press/Nathan Denette
Previous story
Next story

TORONTO — Officials and experts emphasized the interchangeability of the Moderna and Pfizer-BioNTech vaccines on Monday as shipment delays led to changes in Canadians' second-dose appointments.

The federal government has said Pfizer's weekly shipment of 2.4 million doses is delayed and will arrive mid-week. That left provinces switching Pfizer appointments for Moderna, and urging people not to cancel their jabs.

In Ontario, residents were informed they might get a different mRNA vaccine for their second dose as many became eligible to book accelerated second shots on Monday.

The province's top doctor urged people not to hesitate if offered Moderna after getting Pfizer for their first shot.

"We want you getting the full protection as soon as possible," said Dr. David Williams, noting that the highly transmissible Delta variant was still spreading in the province. "The vaccines are safe to mix.”

Alberta also advised residents that the vaccine appointments might have to change based on supply, and noted that the two mRNA shots are considered interchangeable.

"At this time, there is more Moderna available. If you book for Moderna, you will be able to get an earlier appointment and thus complete your series," Alberta Health Services said in a tweet Monday.

In Manitoba, officials encouraged adults to get Moderna shots and warned the province might have to cancel Pfizer appointments booked after July 7 due to the supply slowdown.

"Our public health is saying you can have the same one, or a mix, the advantages are a lot higher than the very small risk," Legault said Monday.

In Ontario – where 76 per cent of adults have had a first dose and 24 per cent are fully immunized – those who got a first dose of an mRNA vaccine on or before May 9 were able to book second doses starting at 8 a.m. Monday. Residents in Delta variant hot spots who got their initial jabs on or before May 30 can do the same on Wednesday.

Some said they were still digesting the news regarding mixing mRNA vaccines.

Krystyna Szajkowski, who received Pfizer as her first shot, said she was nervous about the possibility of mixing doses.

"I was concerned and I was prepared to say no," said the 81-year-old Mississauga, Ont., resident who ended up being offered Pfizer for her second jab Monday.

Many others, however, had no qualms over mixing mRNA shots.

"I did my research and got comfortable with it," Matab Shehab, 22, said heading into her Moderna appointment. "Besides my fear of needles, I'm fine."

Lisa Bitonti-Bengert, the hospital's senior director for clinical innovation, estimated that between 25 and 30 per cent of people opted to wait for Pfizer when informed of the change.

Staff have been talking to people outside the mass clinic at Downsview Arena, she said, explaining the science, the risks posed by variants of the virus, and offering reassurance.

"People aren't quite convinced yet of the interchangeability," Bitonti-Bengert said.

Many of those choosing to wait for Pfizer are able to work from home, she said, while essential workers appeared more likely to make the switch to Moderna for second doses.

Several experts took to social media encouraging people to get whichever of the two mRNA shots they're offered as their second dose.

"With this week’s delayed Pfizer vaccine shipments, I’m concerned about people delaying dose 2 because they are being offered Moderna vaccine," Dr. Jeff Kwong, an epidemiologist with the University of Toronto, said on Twitter. "The last thing we want is any loss of momentum in our flourishing vaccine rollout."

Kwong said analyses of data compiled by the independent research organization ICES show that two doses of Moderna are "just as good" as two of Pfizer in preventing infections.

As a result, he said there's no reason to think one dose of Pfizer and a second of Moderna would be any worse than two doses of the Pfizer vaccine.

"If you got a flu shot this year, you likely don't know the brand. Neither do I. They're made by separate companies," Dr. Zain Chagla, an infectious disease specialist at St. Joseph's hospital in Hamilton, said in a tweet. "Moderna and Pfizer are interchangeable."

Governments have noted that youth will continue to receive the Pfizer shot since it is currently the only one approved in Canada for those under 18.

- With files from Paola Loriggio, Denise Paglinawan in Mississauga, Ont., Kelly Geraldine Malone in Winnipeg and Sidhartha Banerjee in Montreal.

About one fifth of eligible Canadians now fully vaccinated

By The Canadian Press | News | June 21st 2021
Coronavirus in Canada

Because of virus variants

Because of virus variants/mutants, the best protection is actually from a mixed vaccination.

Pfizer and Moderna provide protection based on the spikes of the virus. However a mutation in the spikes may reduce or negate the effectiveness of those mRNA vaccines. A major mutation could make either one or both very ineffective (even completely ineffective if the mutation was severe). But that mutation will have no impact on AZ.

Similarly a mutation in the nucleus or body of the virus could make AZ and the other vector-based (AZ, Jannsen and Vovavax) ineffective, but have no impact on the mRNA vaccines.

Mutations are happening and will continue to happen and will get more severe until the virus is gone (which is very unlikely to happen).

Waiting for NACI and Tam to gather enough data (from a severe mutation that has not yet occurred) may be a fools errand, because in the worst case scenario it may be necessary to re-vaccinate everyone who does not have a mixed vaccination. It might also take 6-8 months for Pfizer and Moderna to prefect another mRNA vaccine to combat the new mutant.

It's true that Astra-Zeneca

It's true that Astra-Zeneca followed by an mRNA vaccine produces higher antibody levels than a double dose of Astra-Zeneca. But for the obvious reasons, Astra-Zeneca is no longer being recommended.
I'll be going with a second dose of the same mRNA vaccine as the first dose.
Why? Not because I'm stupid and get my news and research via FaceBook. Because I often have very bad reactions to particular excipients and adjuvants.
Public Health assumes everyone takes the annual 'flu shot. I don't. For the same reason ppl don't know what company produced the one they got: the information isn't available to them.
Having had some very bad reactions, I don't take anything now without knowing what's exactly what's in it. Sometimes, you still fly a bit blind. But a first dose being OK, followed by a second one exactly the same, means that particular constellation of excipients and adjuvants are safe for me.
Anyone who's had a really bad drug reaction will understand how desperate one becomes to find basic analgesics, anti-histamines or antibiotics.
If they didn't know before now that an mRNA following AstraZeneca provided better protection, they should have. But then, they couldn't have continued in the fallacy that two AstraZeneca doses provides the same protection as two doses of either of the mRNA vaccines.
Not that I necessarily would, but I don't know of any side-by-side studies comparing the two mRNA vaccines.