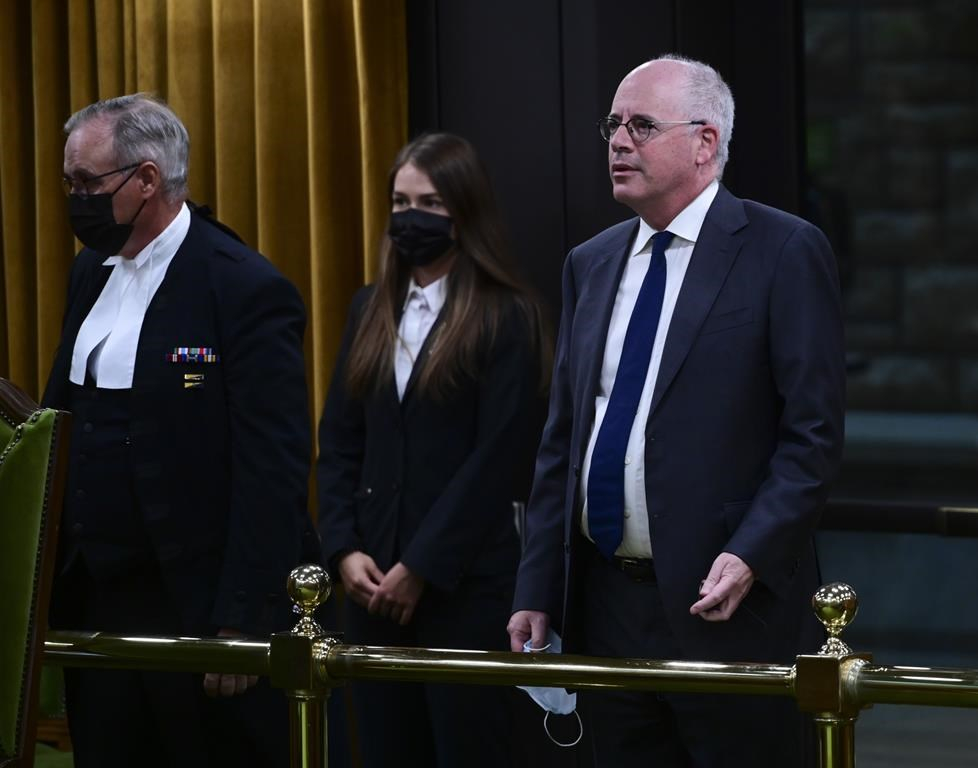 President of the PHAC Iain Stewart, right, approaches the bar in the House of Commons to be admonished by the Speaker of the House of Commons Anthony Rota on Parliament Hill in Ottawa on June 21, 2021. Photo by The Canadian Press/Sean Kilpatrick
Previous story
Next story

The Conservatives are asking that the Public Health Agency of Canada's offices be searched after a public shaming of the agency's president failed to persuade him to turn over unredacted documents related to the firing of two scientists at the country's highest-security laboratory.

PHAC head Iain Stewart was hauled Monday before the bar of the House of Commons to receive a reprimand from Speaker Anthony Rota for his repeated refusal to provide the documents.

Stewart duly showed up — the first non-MP to be subjected to such a procedure in more than a century — and stood impassively at the brass rail at the entrance to the Commons, as ordered by a motion passed by the combined opposition parties last week.

Rota informed Stewart that the Commons possesses constitutional powers to order the production of any documents it sees fit. Those powers, he said, "are essential to the performance" of MPs' duties.

"The House has the power and indeed the duty to reaffirm them when obstruction or interference impedes with its deliberations," Rota said.

"As guardian of these rights and privileges, that is precisely what the House has asked me to do today, by ordering the Speaker to reprimand you for the Public Health Agency of Canada's contempt, refusing to submit the required documents."

Rota told the Commons that Stewart's lawyer had informed him earlier in the day that the PHAC head was still not able to release the unredacted documents, as twice ordered by the Canada-China relations committee and twice by the House itself.

Stewart was not given a chance to say anything Monday. But he told the health committee last week that he is bound by law to protect national security and privacy rights and nothing in the House order relieves him of that obligation.

In a sign of support from the minority Liberal government, the 27-year veteran public servant was accompanied to the chamber Monday by acting Privy Council clerk Janice Charette, who could be seen giving him an elbow bump before he walked in.

Opposition parties have joined forces to demand the documents in hopes that they'll shed light on why scientists Xiangguo Qiu and her husband, Keding Cheng, were escorted out of Winnipeg’s National Microbiology Laboratory in July 2019 and subsequently fired last January.

They are also seeking documents related to the transfer, overseen by Qiu, of deadly Ebola and Henipah viruses to China's Wuhan Institute of Virology in March 2019.

Stewart has said the virus transfer had nothing to do with the subsequent firings. He's also said there is no connection to COVID-19, a coronavirus that first appeared in China's Wuhan province and which some believe may have been released accidentally by the virology institute.

Nevertheless, opposition parties continue to suspect a link and are, hence, determined to see the unredacted documents.

Stewart was forced to stand at the bar for some 40 minutes while MPs debated what should happen next. Opposition MPs initially refused unanimous consent to let him depart but eventually relented.

"Having Mr. Stewart at the bar was very difficult for many of us to witness," Liberal MP Kevin Lamoureux told the Commons later, questioning why "an outstanding" public servant who has done "such a wonderful job" during the COVID-19 pandemic was treated so badly.

"The amount of time he stayed at the bar was deeply offensive to many members."

But opposition MPs argued that the issue goes to the heart of Canada's democracy and the government's continuing refusal to comply with the will of the elected members cannot be allowed to stand unchallenged.

"This government is rolling back 18 decades of parliamentary evolution with its defiance of now four orders of this House and its committee," said Conservative MP Michael Chong.

"Why do Canadians send 338 of their fellow citizens to this chamber if their decisions are going to be ignored? Why do we spend $400 million a year on this chamber and the other one (the Senate), if our votes don't mean anything? Why do we vote to adopt orders if they don't have effect?"

Conservative House leader Gerard Deltell served notice that he will propose a motion calling on Rota to instruct the Commons sergeant-at-arms to search PHAC offices and seize the documents.

If Rota doesn't agree with that, Deltell said he'll move that the issue be referred to the procedure and House affairs committee to consider an enforcement mechanism. If the committee fails to issue a report within four weeks, then the sergeant-at-arms would be directed to search PHAC offices and seize the documents.

New Democrat MP Jack Harris signalled that his party supports the Conservatives' proposal. The Bloc Québécois reserved its opinion, as did Rota, who at several junctures noted that he was dealing with "a very touchy" and "unique" and "unprecedented" situation.

Liberal House leader Pablo Rodriguez proposed an alternative to the original House order, which ordered PHAC to turn over the documents to the parliamentary law clerk, who would redact them as needed, with members of the Canada-China relations committee retaining the right to publicly release redacted material.

Rodriguez said the government is prepared to go along with the law clerk vetting, provided that he is assisted by national security specialists.

He argued that the law clerk does not have "the necessary training or expertise" to determine what sensitive information could negatively impact intelligence agencies. Disclosing sensitive information, Rodriguez said, could inadvertently reveal "covert methods of operations," imperil human sources, identify employees and have "a severe impact on Canada's reputation as a responsible security partner."

Rodriguez also challenged the opposition's position that parliamentary privilege supersedes all other laws, pointing to a 2005 Supreme Court ruling that found legislatures "do not constitute enclaves shielded from the ordinary law of the land."

However, opposition parties countered that he should have made that argument before Rota ruled last week that the Commons and its committees have unfettered power to demand the production of documents, no matter how sensitive.

They similarly dismissed Rodriguez's proposal to let the law clerk vet the documents, with advice from security experts, as too little, too late.