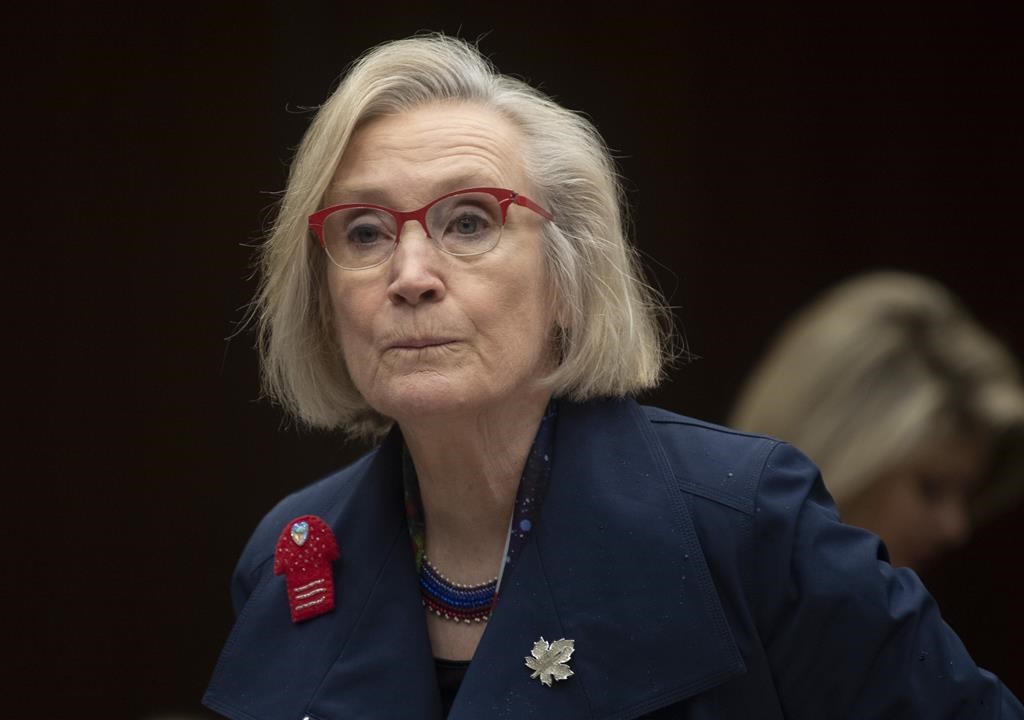 Crown-Indigenous Relations Minister Carolyn Bennett takes her seat as she wait to appear before the Indigenous and Northern Affairs committee in Ottawa on March 10, 2020. Photo by: The Canadian Press/Adrian Wild
Previous story
Next story

OTTAWA — Crown-Indigenous Relations Minister Carolyn Bennett has apologized after she was called out for a one-word text message to Independent MP Jody Wilson-Raybould.

Bennett messaged the word "Pension?" in response to Wilson-Raybould's tweet seeking concrete federal action as a Saskatchewan First Nation announced 751 unmarked graves have been found on the site of a former Indigenous residential school in that province.

The pension response was in reaction to Wilson-Raybould's further call that the prime minister quit his "selfish jockeying" for a federal election Wilson-Raybould says "no one" wants.

Members of Parliament must serve for six years before becoming eligible for a pension and Wilson-Raybould, elected in October 2015, would miss that mark if she were not re-elected in a fall vote.

She fired back at Bennett, saying the minister's tweet was both racist and misogynistic, prompting a quick apology from the minister.

Bennett's online post said she had apologized directly to Wilson-Raybould but neither politician has responded to requests for further details.

"I let interpersonal dynamics get the better of me and sent an insensitive and inappropriate comment, which I deeply regret and shouldn’t have done," Bennett says in a statement on her Twitter account.

Wilson-Raybould's response to Bennett's initial pension query said the post reflects the notion that Indigenous Peoples are "lazy & only want $."

"Shows disregard, disdain, & disrespect for Indigenous peoples, as in our history," she wrote. "Conveys a strong Indigenous woman, is a bad Indig woman."

Wilson-Raybould was appointed as Canada's first Indigenous justice minister under the Liberal government but was booted from caucus in 2019 after she accused Prime Minister Justin Trudeau of pressuring her to secure a deferred prosecution agreement for SNC-Lavalin.

She had earlier resigned as a cabinet minister over the affair.

In August 2019, the federal ethics commissioner concluded that Trudeau violated the Conflict of Interest Act by improperly pressuring Wilson-Raybould to halt a criminal prosecution of the Montreal engineering giant on corruption charges related to contracts in Libya.

Wilson-Raybould was re-elected as an Independent MP in October 2019.

The "pension" comment seems indicative of a very politically cynical viewpoint, as though Bennett couldn't fathom the possibility that some people who are in politics aren't there just for the sole purpose of re-election like the Liberals seem to be.

You just contradicted yourself.

At any rate. I think the fact that JWR took another personal message and exposed it just further proves how far you can trust her. The "pension" comment is just cynical politics...certainly not racist. That's just as politically ridiculous, frankly.

Respectfully, how did I

Respectfully, how did I contradict myself?

I was wondering that, too; I

I was wondering that, too; I suspect that your respondent is seeing JWR as a "Liberal", the case when she was last elected. Except that JWR gave up most hope of re-election when she took her stand against Trudeau.

JWR won re-election as an

You don't think JWR is just

You don't think JWR is just in this and said what she said to get reelected?

Bennet's one word comment is not racist. Period. Jody's twisting of that fact to help her gain traction for a likely fall election is obvious imo.

I find this an odd take. Why

I find this an odd take. Why would JWR owe trustworthiness or protection to Bennett or any of the other Liberals who betrayed and then dumped her? Can't imagine Bennett is such a naive politician that she expects her political opponents (in this case, one her own party turned into an opponent) to protect her when she writes an embarrassing and cynical message.
As for whether it's racist or not, I'm struck by your apparent ignoring of JWR's own explanation, which made a lot of sense to me.

I simply don't believe her

I simply don't believe her explanation.

It was a mean-spirited and

It was a mean-spirited and dismissive remark. If I were a career politician I'd be a fool to not be concerned by pension, but I'd also find it deeply insulting to have a colleague suggest it as my primary motivator.

Having said that I'm still finding it a bit of a stretch for this to be construed as racist, but I'm speaking from a place of privilege and context is everything I guess.

I'm not about to cast

I'm not about to cast aspersions without all the facts but it is truly saddening to see Bennett sink to political pettiness. I expect more of her and of all the other women in the liberal caucus. If they can't mobilize reason and breadth of vision despite the good old boys, politics-as-usual gang - the Liberals are doomed to irrelevance, or worse, fall to the even more useless conservatives!

It seems to me that this

It seems to me that this situation parallels that of the recent national Green Party brouhaha. No one comes out of it smelling any better than anyone else.

Having said that, Ms. Bennett opened the door unnecessarily with her one-word commentary (though I can imagine that a small history book of the protagonists previous interactions is the subtext to that one word).

I find your last sentence

I find your last sentence very insightful and on point. We witnessed the series of events that drove JWR out of the party, but you can be sure a whole lot of other things happened that we know nothing about.

My only complaint about the

My only complaint about the one-word was it was cliche'... because nothing is more common in Canada than to criticize MPs as being there for the generous pension, earned in such a short time. Heck, the entire Reform Party in the 90s ran on a promise to NOT accept those pensions, crying "corruption" and "featherbedding" the whole time. After some had been in for over a decade, many drew catcalls from all sides when they reneged and accepted them anyway.

So it struck me as an OBVIOUS remark, when somebody getting a pension or not could hinge on whether the election is September or November.

I have been on JWR's side in her breakaway, but this really detracts from her, in my eyes. Since just about every MP takes some heat on pensions, generous compensation, and being out for themselves, it's like you can't criticize this one person for a thing that most politicians have to take.

All JWR had to do was write back "If I were in this for personal gain, I'd just have to have kept my mouth shut and toed the Party line. Obviously, I'm not".

That would have been a reminder of her heroism, and shut down criticism just as hard. Now a whole bunch of right-leaning Canadians are thinking (if not saying) "race card".