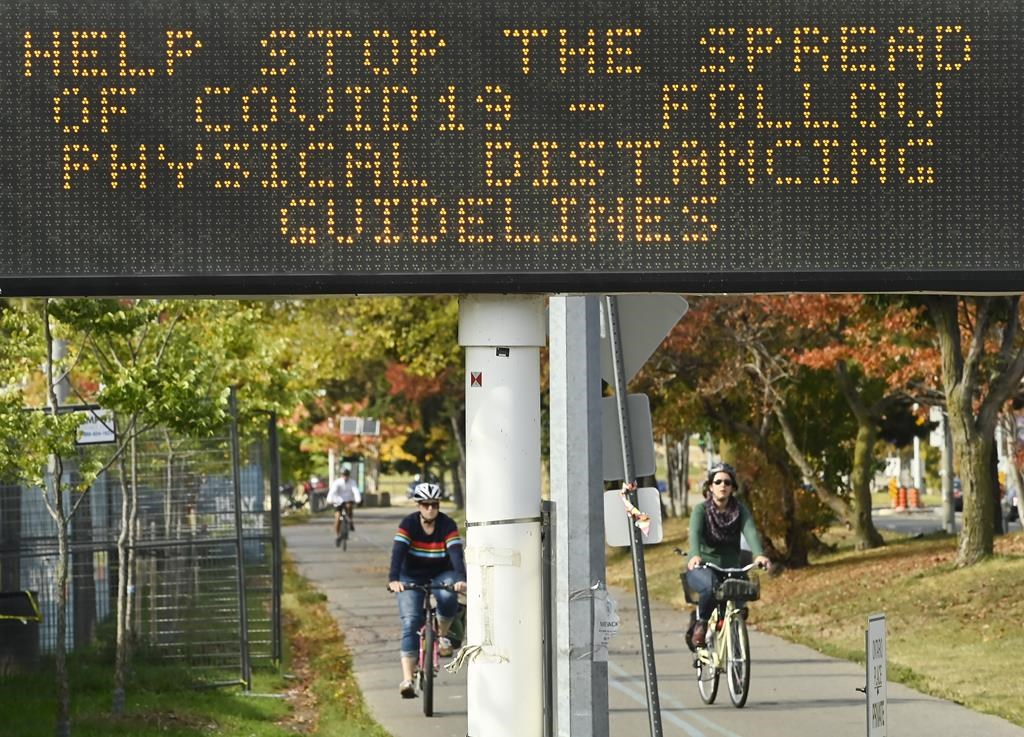 People exercise along the lakeshore path on Lake Ontario during the COVID-19 pandemic in Toronto on Tuesday, Sept. 29, 2020. File photo by The Canadian Press/Nathan Denette
Previous story
Next story

Almost 30 per cent of respondents in a newly released Canada-wide survey admitted to breaking COVID-19 rules — and felt justified doing so.

The survey by the Canadian Hub for Applied and Social Research at the University of Saskatchewan was done between June 1 and June 14. It asked 1,000 people about how closely they stuck to public health orders and where they were getting their information about the pandemic.

Some 29 per cent said they broke at least one COVID-19 restriction. The most common transgressions were around gathering limits and wearing masks.

But the survey also found that respondents were generally diligent about following isolation requirements and gave honest responses to COVID-19 screening questions.

The survey says some people did not think regulations "made sense for them" because they were fully vaccinated and they felt what they were doing was safe given their status.

Saskatchewan Minister of Health Paul Merriman said he believes social media has played a major role in confusing people about public health measures meant to stem the spread of COVID-19.

“The issue that I saw during most of the restrictions that have been implemented since the fall was that there were lots of interpretations going around on social media and the rumour mill,” he said.

“We tried to communicate this in a very clear way, (but) unfortunately some of it got twisted on social media. That wasn’t clear and created some confusion, which people didn’t need.”

Almost 30 per cent of respondents in a newly released #Canada-wide survey admitted to breaking COVID-19 rules — and felt justified doing so. #COVID #socialdistancing

The survey found that 35 per cent of people were getting their COVID-19 news from social media — particularly Facebook, Twitter and Instagram — and 71 per cent were getting news by word of mouth.

The greatest number of people — 88 per cent — were getting their news from online or TV news outlets, and 70 per cent also informed themselves through government websites.

Merriman said the data reflects what he has seen in Saskatchewan, where people were motivated to seek out good information from multiple sources.

“I understand there was some confusion, and I had to personally clarify some of the restrictions to people so they understood,” he said.

“But the good news is that they were asking questions, because they wanted to make sure they were sticking to the restrictions and the guidelines out there, versus unintentionally bending the rules.”

The survey also found that the pandemic has spurred some controversy and strife in close relationships. Twenty-two per cent of respondents reported a “falling out” with someone close to them over different views and opinions about the pandemic.

Despite the survey's results, Merriman said it’s clear that people have generally been following restrictions throughout the pandemic.

“Every time we increased the public health guidelines, our numbers either plateaued in the next few weeks or started to calm down,” he said. “So there was good comprehension of that.”