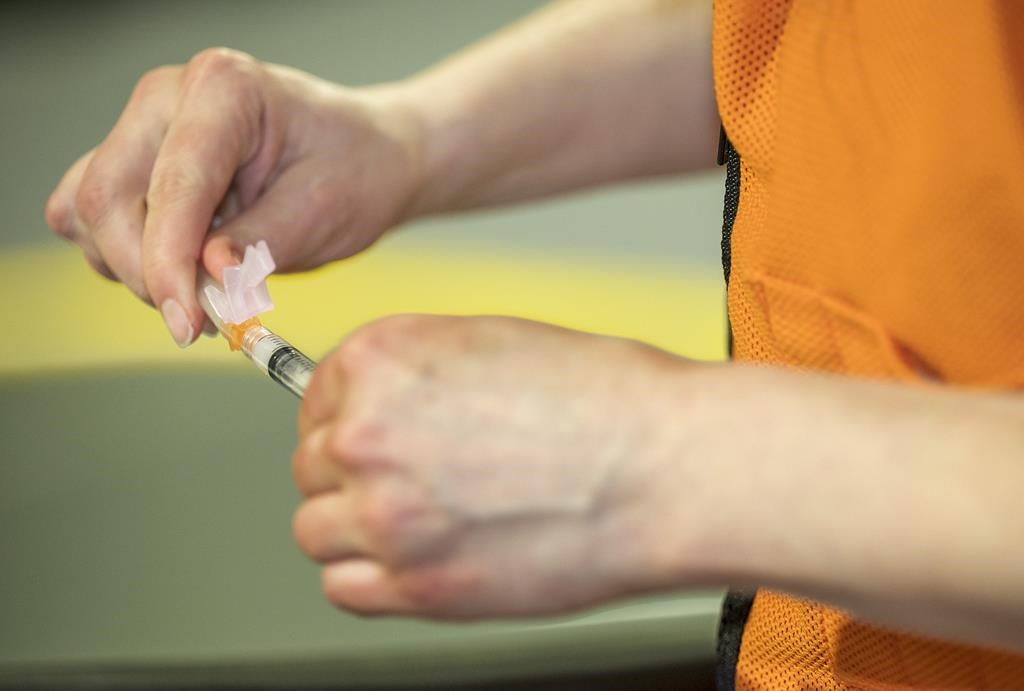 A nurse prepares a shot of the COVID-19 vaccine at the Yukon Convention Centre in Whitehorse on Wednesday, March 3, 2021. File photo by The Canadian Press/Mike Thomas
Previous story
Next story

A husband and wife who flew to a remote Yukon community to receive early doses of COVID-19 vaccine in January were "cavalier" and "thoughtless," a judge said after the couple pleaded guilty to violating the territory's Civil Emergency Measures Act.

Chief Judge Michael Cozens of the Territorial Court of Yukon agreed with a joint sentencing submission for Rodney Baker, the former CEO of the Great Canadian Gaming Corp., and his wife Ekaterina Baker, who appeared remotely in a Whitehorse court on Wednesday.

They pleaded guilty to two counts each of failing to self-isolate for 14 days and failing to act in a manner consistent with their declarations upon arriving in Yukon.

Cozens ordered the Bakers to pay the maximum allowable fine of $500 plus a $75 victim surcharge for each charge, amounting to $1,150 each.

The court heard the couple from Vancouver stated their purpose for visiting was tourism and education, but two days after arriving, they boarded a chartered plane to Beaver Creek, a small community near the Alaska border where more than half the population of about 100 are members of the White River First Nation.

The Bakers were vaccinated at a mobile clinic before flying back to Whitehorse, where enforcement officers intercepted them trying to leave for Vancouver, the court heard.

The former gaming executive and actress were handed violation tickets and charges carrying fines, six months in jail, or both.

Outlining the joint sentencing submission, Crown attorney Kelly McGill told the court there were both aggravating and mitigating factors in the Bakers' case.

There was a "high level of deception" and planning involved in the trip, she said, including booking flights and pre-registering at the Beaver Creek vaccine clinic.

An approximate estimate of the cost of the trip was $10,000, McGill said.

The mitigating factors include the Bakers' early guilty pleas, their lack of records of prior offences and the fact they shared the results of two negative COVID-19 tests with Beaver Creek to ease community members' fears, she said.

The court heard the Bakers have each donated $5,000 to the global vaccine sharing effort known as COVAX, which the judge called a "positive move," while encouraging the couple to offer reparations directly to Beaver Creek.

If not for the Bakers' guilty pleas and actions after being charged, McGill said, "it may have been Crown's submission that denunciation and deterrence required (a) custodial sentence for this type of behaviour, which is completely unacceptable."

The defendants are "known to be very wealthy," she said, and the joint sentencing submission was for the maximum fine allowed under territorial law.

The Bakers declined an opportunity to address the court, but their lawyer said they apologize unreservedly, and they regret the significant impact of their actions.

The Crown factored in the couple's "good faith donations" as part of an expression of the remorse they feel over the harm done, McGill said.

Cozens said he appreciates that some people may feel jail sentences should be imposed on the Bakers, but he did not find the proposed sentence was unfit and noted that no one contracted COVID-19 as a result of the couple's actions.

The psychological harm to the Beaver Creek community was evident in an impact statement read in court by Janet Vander Meer, a member of the White River First Nation, he said.

Premier Sandy Silver said in a statement that while the Bakers' donation reflected remorse, they haven't yet directly apologized to the White River First Nation and the residents of Beaver Creek.

"The community of Beaver Creek feels violated by the actions of the Bakers," Silver said. "They have called for an apology and they deserve one."

Vander Meer said Beaver Creek's most vulnerable residents attended the same clinic as the Bakers and community members developed anxiety after the incident, fearing the next clinic might not be safe.

Beaver Creek was just the second Yukon community to host a mobile vaccination clinic that had travelled more than 450 kilometres to reach them, Vander Meer said.

"It was never a thought in our mind that someone would take advantage of our situation as a small, remote community," the statement said.

The community is still grappling with a lack of trust, she said.

COVID-19 cases drop in Ontario and Quebec, but variants cause concern