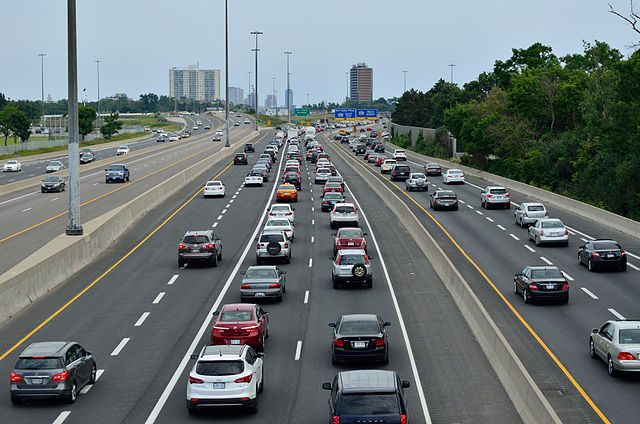 Ottawa is setting a new goal for when new cars and trucks will be required to be net-zero in a clear sign to the auto industry that the era of gas-guzzlers is coming to an end. Photo by Raysonho / Wikimedia Commons
Previous story
Next story

Transport Canada is setting a new date for when new cars and trucks will be required to be net-zero in a clear sign to the auto industry that the era of gas-guzzlers is coming to an end.

Ottawa is setting a “mandatory target” that all new light-duty cars and passenger truck sales be zero emissions by 2035. That target is five years earlier from its previous 2040 goal, and the federal government intends to set interim 2025 and 2030 targets to steer the transition.

“Through measures aimed at accelerating the transition to 100 per cent zero-emission vehicles sales, we will continue building a cleaner and more-resilient economy, while also creating good jobs and opportunities for all Canadians,” said Transport Minister Omar Alghabra in a statement Tuesday.

Clean Energy Canada welcomed the news, but said more details are needed to understand how the goal will be achieved.

“That Canada will move forward its target of ensuring all car sales are for zero-emission vehicles by 2035 is certainly a step in the right direction — and aligns the country with other leading jurisdictions like California and Quebec that also have 2035 deadlines,” she added.

In its announcement, Ottawa also said it was working to align vehicle GHG emission regulations with the United States, but stopped short of specific details.

Kyriazis said the solution to getting more electric vehicles on the road is to implement an EV standard that forces automakers to sell more EVs over time.

“We also know that getting more Canadians in EVs — from cars to buses — is critical to building out Canada’s fast-growing electric vehicle manufacturing sector. If we want to be leaders in building EVs and their batteries, we need to grow the market for them at home,” she said.

Environmental Defence also applauded the federal government’s new target, but said that as a developed country and major contributor to climate change, Canada should pursue an earlier date to require 100 per cent EV sales.

In a recent report, Environmental Defence found that 3.5 per cent of new vehicles sold in Canada are electric, while four out of every five are SUVs, pickups, or vans. The group found that over the past decade, increasing SUV sales added 18 million tonnes more of carbon emissions than what would have been emitted by standard-sized cars.

The auto industry spends 28 times more on advertising for vehicles with combustion engines than for electric vehicles (EVs), a 2019 Sierra Club study showed. And an Environmental Defence analysis found that over the next five years, GM and Ford are planning to build over five million gas-powered SUVs and trucks, compared to about 320,000 electric vehicles.

The report called on Ottawa to implement a strict national zero-emission vehicle standard, financial incentives to EV buyers, and new taxes on the sale of trucks and SUVs to accelerate a clean transition.

A gasoline powered car can be

A gasoline powered car can be carbon-negative, if we would put the effort into making synthetic fuel, and taxing the process to sequester carbon on the side. Business just wants to sell us the most expensive solution, requiring all new hardware.

You make a good point. Tax

You make a good point. Tax the fuel, not the car. There are people working to take C02 out of the air to make fuel.

While that's technically true, it strikes me as actually much more expensive than just going electric.

Very true. And it's uncommon

Very true. And it's uncommon technology, very much outcompeted by a simple 220 plug connected to the grid via a two-way switch. Most of today's EV owners relish the prospect of "gassing up" at home for a fraction of the cost (i.e. nighttime off-peak hydro rates) of gassing up at a service station, and then selling some of the energy back to the grid to offset costs further at subsequent periods of peak demand (e.g. daytime A/C use during heat waves). Moreover, an EV fleet can act as a gigantic battery to enable grid managers to draw power from independent EVs during peak times.

There will always be doubters. Perhaps they should just have a think.

This 2035 target seems hollow. As the day gets closer, it will be on some future government to hold the line. Plus it means gas cars will be on the road until 2050. What we need is a more aggressive increase in carbon fees, couple with higher fees to cover the other costs of cars: policing, courts, medical cost of accidents and disability, and so forth. More people need to choose transit, and governments need funds to build that better transit.

Going from gas-guzzling to

Going from gas-guzzling to electricity guzzling is still crazy. There is no good technical reason for a land vehicle to weigh more than it carries. We are hauling about 90% emotional baggage, carefully cultivated by advertising. If we are going to build a radical change, let's keep it down to what we actually need.

I would think that buyers of

I would think that buyers of excessively large vehicles are triggered by a deep insecurity about their sexuality, at least how it applies to males. There isn't much of an exception with contractors on that either. Their trucks are usually underused for the basic design of simple hauling, but their need for an expanded personal space defined by steel and fat tires is a show that is subsidized through expense claims and business exemptions. The immature boys in big trucks tearing up stream beds and hillsides are another matter.

The rest is plain old consumer vanity, which is especially obvious in those who "need" more than one vehicle in their household and are willing to go deep into debt (or tap an early inheritance from Dad) to accomplish. This is true even if they live in a perfectly walkable and transit rich inner city that evolved with streetcars and were not designed to handle today's volume of cars, are unemployed via the COVID economy or retired.

The waste is inexplicable under any other definition, but be sure that unsustainable layers of public spending on massive road infrastructure enables this long-term trend, and it must be broken with sincere policies enacted by all levels of government on climate mitigation and adaption and countering our deeply embedded car addiction with sustainable urbanism.