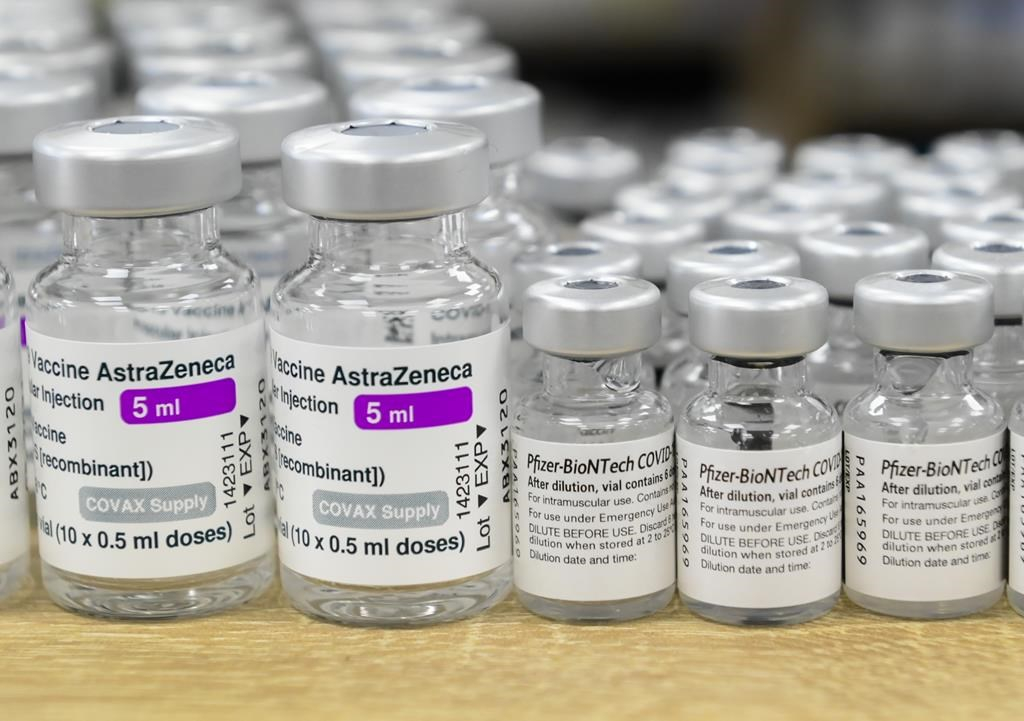 Vials of both Pfizer-BioNTech and Oxford-AstraZeneca COVID-19 vaccines sit empty on the counter at the Junction Chemist Pharmacy, in Toronto, on Friday, June 18, 2021. File photo by The Canadian Press/Nathan Denette
Previous story
Next story

A vaccine study in the United Kingdom reports that getting a dose of the Pfizer-BioNTech vaccine four weeks after a dose of Oxford-AstraZeneca produced a much stronger immune response than two doses of AstraZeneca.

The results are similar to those reported earlier this year from small studies in Germany and Spain and will reinforce the decision to mix and match vaccines in much of Canada.

The National Advisory Committee on Immunization in Canada said June 1 there was enough evidence about the safety of mixing two vaccines to tell that provinces could begin to offer Pfizer or the other mRNA vaccine from Moderna as a second dose to people who got AstraZeneca first.

On June 17 NACI went further and said growing evidence that mixing the vaccines is creating a better immune response meant that it was now "preferred" for AstraZeneca recipients to get Pfizer or Moderna second.

NACI soured on the AstraZeneca vaccine in April when it was potentially linked to rare but serious vaccine-induced blood clots that have not been found in people who received Pfizer or Moderna.

Health Canada says the vaccine is still safe and effective, with the risks posed by COVID-19 higher than the risk of vaccine-induced blood clots. NACI however said if there is mRNA available it is the preferred type of vaccine.

As a result most provinces stopped using AstraZeneca for first doses by the middle of May. In the last two weeks of May, fewer than 18,000 new shots of AstraZeneca were administered, out of more than 5.4 million shots given across Canada.

Most provinces are still limiting first doses of AstraZeneca to those who can't get Pfizer or Moderna for some reason, such as an allergy. But supplies are also an issue. Pfizer and Moderna have collectively shipped more than 30 million doses since the beginning of May, while Canada has received about 1.45 million AstraZeneca doses.

In early June, all provinces moved to begin offering Pfizer or Moderna as a second dose to those who received AstraZeneca first. Health Canada says in the first three weeks of June 459,000 people got a mixed vaccine series, though that number is not broken down by vaccine. It will include people who also mixed the two mRNA vaccines.

However, the study's authors warn that the results so far are based on a four-week interval and it is already known from other studies that AstraZeneca has worked better if the second dose is given eight to 12 weeks later.

Additional results using a 12-week interval will be available in July.

Lead investigator Matthew Snape, an associate professor in pediatrics and vaccinology at Oxford, says the results show the vaccines can be used interchangeably, adding flexibility to the rollout of vaccines around the world.

The study is also now looking at mixed vaccine programs that include Moderna and the as-yet-unauthorized vaccine from Novavax.