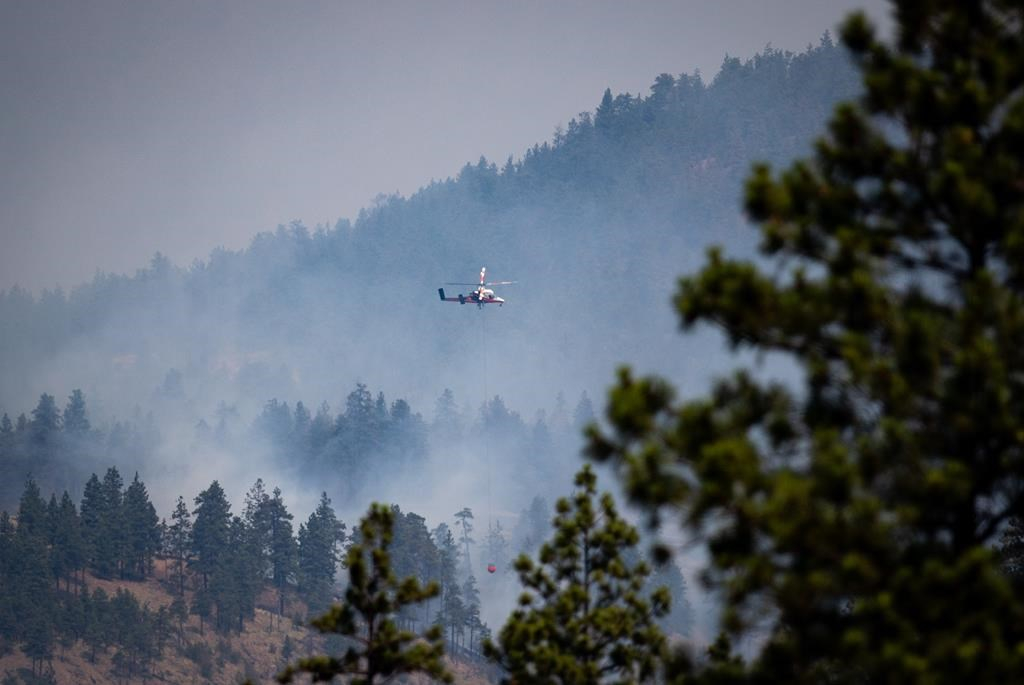 A helicopter pilot prepares to drop water on a wildfire burning in Lytton, B.C., on Friday, July 2, 2021. File photo by The Associated Press/Darryl Dyck
Previous story
Next story

A statement issued by the wildfire-ravaged Village of Lytton describes how little time residents had to flee and underscores the extreme challenges ahead as the Fraser Canyon community looks to rebuild.

Village staff were alerted to the fire that spread "with ferocious speed" last Wednesday when someone banged on the office windows after business hours, said the statement issued a week after the fire sparked.

Staff called Mayor Jan Polderman and the volunteer fire department but found firefighters were already battling the flames that razed the centre of the village.

RCMP officers were already evacuating residents along a downtown street when Polderman called 911. He then contacted the Thompson-Nicola Regional District to let them know he was ordering a full evacuation, the statement said.

Conditions were extremely dry and a brisk wind spurred on the fire, which has so far charred 77 square kilometres of bush and is still classified as out of control.

In addition to two confirmed deaths, the statement said there were several injuries.

"We want everyone to know that their bravery was incredible in the face of this unimaginable horror," it said.

The village's top priority is locating and supporting residents, said the statement, which urges anyone who knows someone who was in Lytton last Wednesday to contact the RCMP if they haven't heard from that person since the evacuation.

Staff Sgt. Janelle Shoihet said the RCMP could not provide the number of people who may be unaccounted for as of Wednesday, since the Mounties have not yet completed initial steps on all missing person reports.

To date, individuals who have been reported missing have been reconnected with family after that initial process was complete, Shoihet said in an email.

Bravery came amid 'unimaginable horror' of #wildfire, says statement from #Lytton, #BC. #BCPoli

The fire destroyed equipment at Lytton's emergency operations centre and staff are currently working from "a couple of laptops, an iPad and our cellphones" in an office belonging to the regional district based in Kamloops, said the village's statement.

Some properties on the eastern side of Highway 1 were spared, but the statement said they have no electricity, sewer or water services and all infrastructure that has not been "melted, incinerated or damaged beyond repair" is too unsafe to use.

"For those looking at heartbreaking pictures of our village, please understand that if a wall is standing, it does not mean there is anything on the other side of it."

A path has been cleared and the regional district has arranged for buses to take residents into the village to see the extent of the damage on Friday, though the statement from the village said the tour won't happen until the BC Wildfire Service is certain there is no danger from fire or other hazards.

The village is working with the Provincial Health Services Authority disaster psychosocial services program to offer trauma and grief counselling, it said.

"In the coming days, weeks, months and years our hearts will break again and again as that trauma and loss is replayed in our minds and our souls," the statement said. "But we are Lytton, we are strong and we will rebuild our homes and businesses, rekindle our friendships and community, stronger and more enduring than ever."

Testing and an in-depth assessment will also be needed to determine the state of the community's watershed and if it has been contaminated by fire retardant.

Power and phone crews are already assessing damage in the village, but the statement said CN Rail and CP Rail "will have no access" to Lytton, except to use rail-based vehicles to handle fire suppression on their respective rights-of-way.

Forrest Tower, a BC Wildfire Service information officer stationed at Boston Bar, said the number of firefighters assigned to the Lytton Creek blaze will grow to about 150 by Thursday as 40 personnel from New Brunswick join crews from B.C.

The fire has stabilized over the last two days as the temperature cooled down from last week's record-breaking heat and the added personnel will speed up the establishment of control lines and fire guards, Tower said in a phone interview.

Crews are keeping an eye out after Environment Canada issued severe thunderstorm warnings for parts of the southern Interior, including Lytton, he noted.

The fire is suspected to be caused by human activity, but the wildfire service's investigation is ongoing, he said.

"If it's not a lightning-started fire, it's most likely human-caused. And so that's everything else you can imagine," he said, citing examples from campfires and car fires to sparks from logging equipment and rail lines.

The wildfire service's website lists 14 "fires of note" burning across B.C., which are either highly visible or pose potential safety risks. There are more than 200 active fires, most of them in the southern Interior, where lightning remains a threat.

A monthly seasonal outlook released by the service this week said burning conditions across much of B.C. are three to four weeks ahead of schedule and fire behaviour is more typical of conditions usually seen in mid-July or August.

Widespread thunderstorms have brought more lightning than rain, it said, and any significant rainfall has been confined to the northeast corner of B.C.

Delayed starts from dry lightning are expected in the coming weeks, the outlook said.

Environment Canada has lifted all heat warnings in B.C., although air quality advisories linked to wildfire smoke remain posted across much of the Interior.

This report by The Canadian Press was first published July 7, 2021.