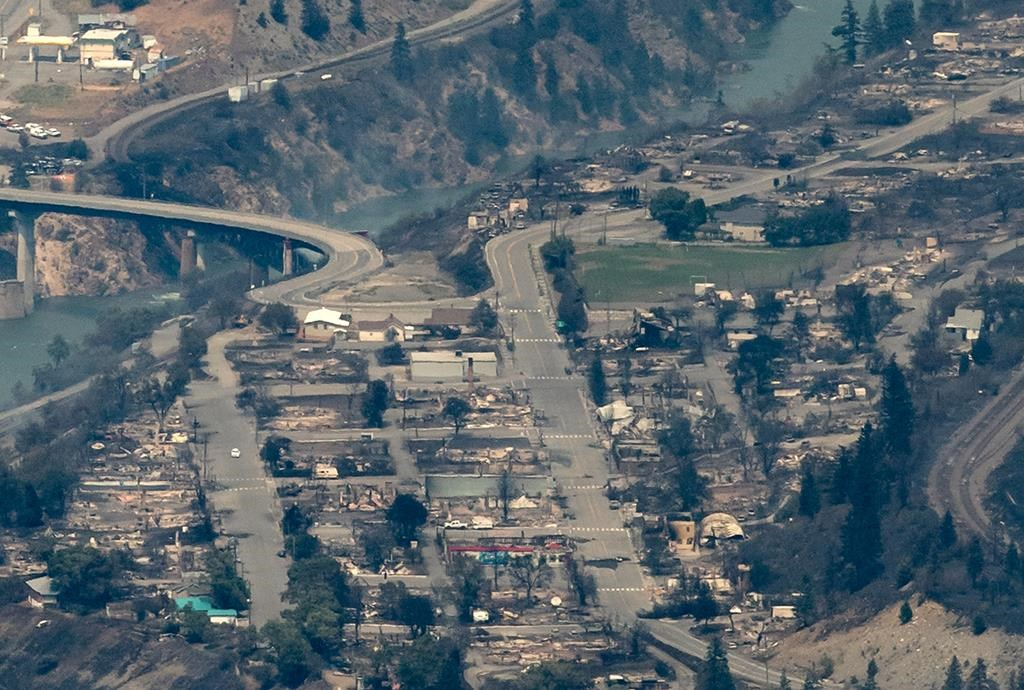 Structures destroyed by wildfire are seen in Lytton, B.C., on Thursday, July 1, 2021. Photo by The Canadian Press/Darryl Dyck
Previous story
Next story

Residents of a community in British Columbia's Interior desperately searched for loved ones and tried to process the loss of their homes on Thursday after learning that most of the village of Lytton had been destroyed by raging wildfires.

The province's public safety minister said the blazes, one of which spanned nearly 90 square kilometres, had levelled most buildings in the village about 250 kilometres northeast of Vancouver. Mike Farnworth also said multiple residents were unaccounted for, though he didn't offer any firm numbers or specific damage estimates.

The news came as an additional blow to residents who were ordered to flee the area at a moment's notice on Wednesday night and now find themselves grappling with the loss of their homes and possibly worse.

Jennifer Thoss spent much of Thursday searching in vain for her elderly tenants, who were on the phone with her when police officers came knocking and ordered them to flee to safety as the fire swept through town.

The Delta, B.C., resident was on the phone with Henry and Donna Robinson and 911 at 5:25 p.m. Wednesday, she said, adding police had already come to the door of the home on one of Lytton's main streets. That home, she said, is gone.

"I was on the phone with the 911 operator and I used another telephone to call the tenants," Thoss said.

Thoss said she spoke to the couple for about 10 minutes, but hasn't heard from them since.

She doesn't know if the RCMP was able to get them to safety. She's called hospitals, evacuation centres and the RCMP but no one has been able to locate them, she said.

"They don't have family and are completely on their own," she said of her tenants in their late 70s and early 80s.

A similar search ended in relief for Rosanna Stamberg, who was able to track down her son and daughter after hours of effort on Thursday.

Fire destroys most homes and buildings in Lytton, B.C.; some residents missing. #Lytton #BC #HeatWave #Wildfire

But the former Lytton resident, who now lives in Enderby, B.C., still cried when discussing those who remain unaccounted for.

"Oh, that makes me feel so sad for the people who don't know if their family members are OK," Stamberg said.

"Some of the (residents) I'm closer to, I know they've made it out in there," she said. "They're all OK. But it doesn't take away from the ones who are missing family members and they don't know where they are."

The fires, which levelled the village a day after it recorded Canada's highest temperature on record in the midst of a historic heat wave, left devastation in its wake according to politicians and residents. Long-range photos of the scene show blackened trees alongside homes and businesses burned to their foundations.

Farnworth said the roughly 1,000 people who managed to flee to safety when the emergency evacuation order was issued will find very little left when they return.

"Most homes and structures in the village, as well as the ambulance station and the RCMP detachment, have been lost," Farnworth said at an afternoon news conference. "I also understand that some residents have not been accounted for and their location is currently being investigated by the RCMP."

Farnworth urged residents to contact police and emergency social services as groups work to track down those who are missing.

The Mounties referred inquiries to the province's emergency management service, which didn't offer any comment on the missing.

The BC Coroners Service, meanwhile, said it could not confirm any possible deaths.

Premier John Horgan offered pledges of support for the affected residents, noting the fires remain active and the ongoing dangers of the situation cannot be overstated.

Horgan, who said two blazes appear to have played a role in Lytton's destruction, said causes have not yet been determined.

"Lytton has been devastated and it will take an extraordinary amount of effort to get that historic location back to what it was," Horgan said, adding both the provincial and federal governments are committed to helping residents rebuild.

The show of support from Ottawa came directly from Prime Minister Justin Trudeau in a call between the two leaders earlier in the day, he added.

An evacuation order was issued at 6 p.m. local time Wednesday, leaving the community to grapple with a tremendous amount of "devastation and loss," said John Haugen, a deputy chief with nearby Lytton First Nation.

"It's incomprehensible, people are so anxious and worried about what comes next for them," he said.

The nation, which has sent people to a recreational centre in Lillooet, B.C., is still trying to account for all of its members, he said.

He said he knows of some people who have suffered smoke inhalation and burns from the fire.

Edith Loring-Kuhanga, an administrator at the Stein Valley Nlakapamux School, said she and fellow board members had to cut short a Zoom interview with a prospective teacher Wednesday as the fire burned down their block.

She initially ignored a siren going off outside, only to receive a call from a school board member telling her to leave.

"He said 'I'm down here at the fire and you got to leave, grab whatever you can quickly,'" Loring-Kuhanga said, describing the ensuing wreckage as extensive.

"It was just unbelievable. It was just a nightmare," she said. "So many community members have lost everything."

Farnworth said the province is looking at declaring a state of emergency as the wildfire season develops and is in the process of rewriting its Emergency Program Act to help it better respond to instances of extreme heat.

Rosalin Miles, a member of the Lytton First Nation, has started a GoFundMe campaign to help affected community members.

"There are going to be people who are going to fall through the cracks who might not be able to rebuild, who might not have insurance," Miles said, adding the money will be necessary for the many local residents living in poverty before the blaze.

Evacuation orders were also issued for 1,000 residents near Deka Lake, west of 100 Mile House after a wildfire grew to 70 square kilometres in size.

The BC Wildfire Service said in a statement posted to its website that much of the province remains under "high" risk of fire danger.

This report by The Canadian Press was first published July 1, 2021.

Horgan and Trudeau should

Horgan and Trudeau should cancel LNG Canada and TMX if they really want to help.

Horgan and Trudeau should

Horgan and Trudeau should cancel LNG Canada and TMX if they really want to help.