Horgan will ask PM for military assistance with wildfire prevention 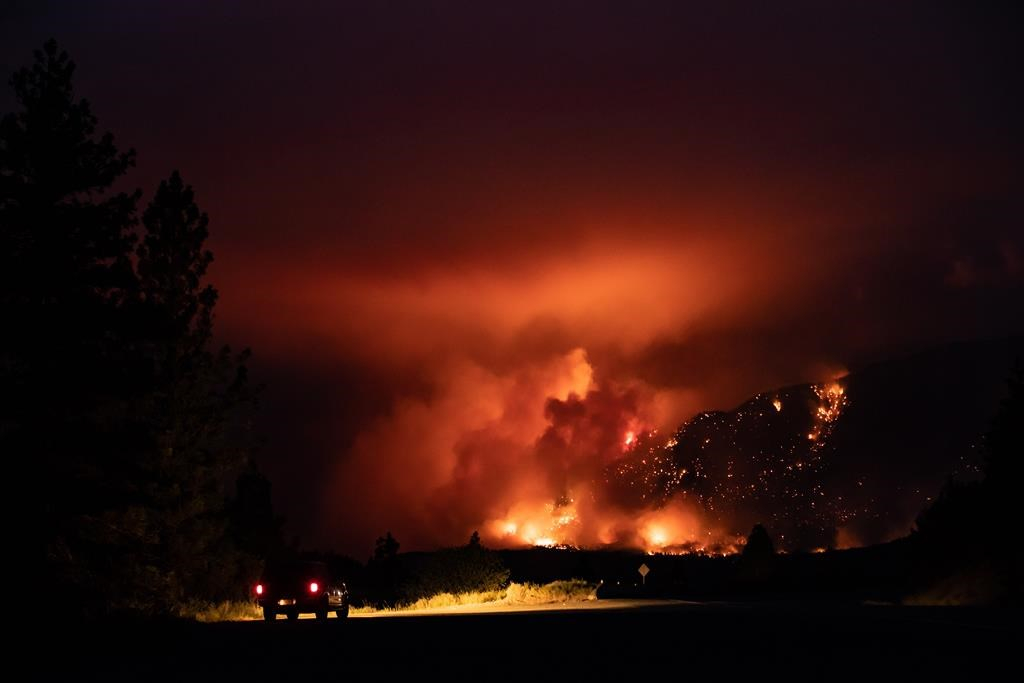 A motorist watches from a pullout on the Trans-Canada Highway as a wildfire burns on the side of a mountain in Lytton, B.C., on Thursday, July 1, 2021. File photo by The Canadian Press/Darryl Dyck
Previous story
Next story

Trudeau and Horgan met Thursday with local government and First Nations leaders to discuss the recent wildfire devastation in the village of Lytton and the ongoing extreme fire situation across the province.

Horgan said B.C. is experienced and accustomed to dealing with wildfires during the summer months, but massive, destructive fires over recent years now demand governments look at new approaches to prevent and fight fires.

"The intensity and frequency of fires has been unprecedented in the last five years," said Horgan, referring to the consecutive record wildfire years in 2017 and 2018 and the early, concerning start to the current season.

"This speaks to me and the government of B.C. as a critical time to pivot to find new and innovative ways to do the work that we do," he said. "We need to find better ways to prepare. That means not just deploying our resources when the fires start, but when the fires stop."

During questioning after a news conference with Trudeau about child-care funding, Horgan said the military could be called upon to serve in a larger prevention role by clearing forest debris to reduce fuel before fires start.

"We're hopeful we can find new ways to redeploy military resources, the Armed Forces of Canada, to help with fuel management, because if there's no fuel, it's easier to manage the fires."

Trudeau said the federal government's primary concerns are currently focused on supporting the residents of Lytton, but future methods of fire prevention must be considered.

"We need to be thinking about stronger processes to put in place and better things to respond to, but right now we're still very much in the support for grieving families, for the people who've lost so much."

A wildfire raced through Lytton last week, leaving residents minutes to get out. Two people were killed and several others were injured.

An investigation is underway for the cause of the fire, but the BC Wildfire Service says human activity likely set it off.

"Canadian Armed Forces assets are positioned to provide airlift to transport personnel and equipment into and out of areas affected by fires and provide emergency airlift for evacuation purposes, if required,'" said Daniel Le Bouthillier, chief media spokesman, in a statement.

He said highly trained military personnel are ready to assist and support civilian authorities during crisis situations in Canada when asked by the federal government.

Trudeau said he will tell Lytton's municipal and Indigenous leaders that the federal government is there to help.

Lytton Mayor Jan Polderman left the meeting saying he received a promise to help the community.

"They made a commitment to rebuilding the town of Lytton," said Polderman. "The commitment I've heard is one thing, the followup is another."

There are more than 200 active fires burning across the province, of which 15 are classified as highly visible or potentially threatening, including the blaze that destroyed Lytton last week and a 392-square-kilometre fire northwest of Kamloops.

-- By Dirk Meissner in Victoria

This report by The Canadian Press was first published July 8, 2021.