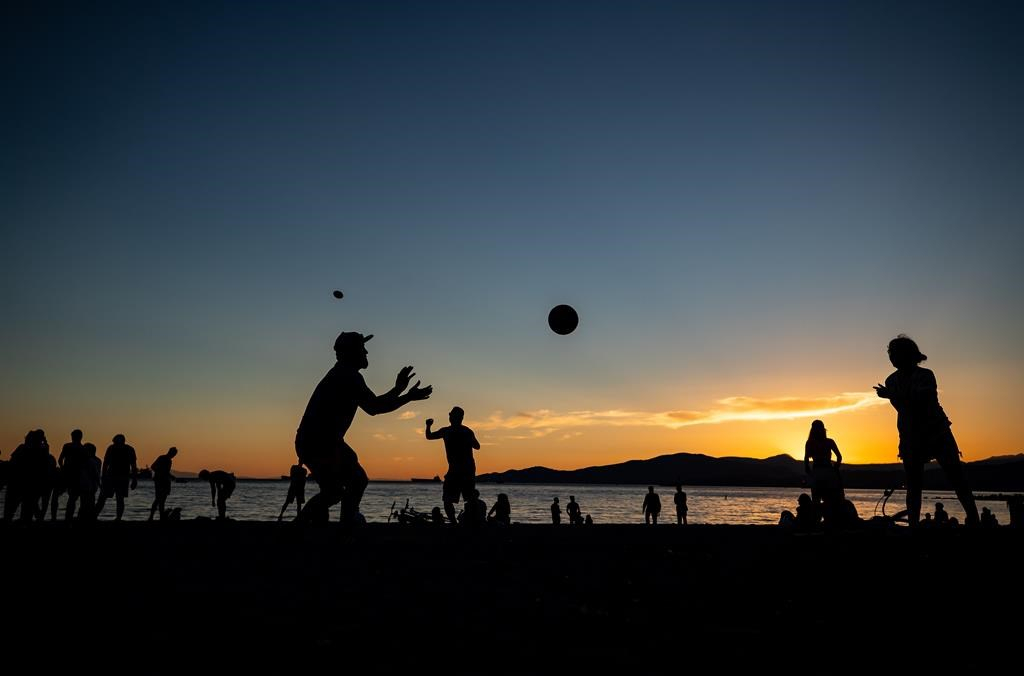 People are silhouetted while playing and gathering at English Bay Beach at sunset, in Vancouver, B.C., on Monday, June 21, 2021. File photo by The Canadian Press/Darryl Dyck
Previous story
Next story

The reading from Environment Canada in Lytton showed the mercury surpassed the previous record of 45 C set in Saskatchewan in 1937.

A heat warning is in effect for most of Western Canada and the weather agency says numerous daily temperature records have been shattered across B.C.

Some daily highs are forecast to top 40 C, with little reprieve overnight.

Sarah Henderson, the scientific director or environmental health at the B.C. Centre for Disease Control is encouraging people to watch for symptoms of overheating.

Henderson recommends drinking plenty of water and applying water to the skin while standing in a breeze to help the body cool down without air conditioning.

Heat can build up indoors to the point of becoming unsafe, she noted.

The sweltering heat and cloudless sky didn't deter some Vancouverites from heading to the beach, and many umbrellas dotted crowds that appeared smaller than usual for a sunny day at the popular Kitsilano and Stanley Park beaches.

Others, like Natalie Moser, opted to find shade at their neighbourhood park.

Moser said she would normally stay at a local hotel to enjoy the pool during especially hot weather, but that option was hampered by COVID-19 restrictions and she thought the beach would be too hot, even with an umbrella in hand.

"Today was just really about getting something that was cool," she said.

Eastern Metro Vancouver and the central Fraser Valley remained under an air quality advisory Sunday due to high concentrations of ground-level ozone.

As temperatures climb, BC Hydro said a new record for peak hourly demand during the summer set Saturday could be broken again on Monday.

Closing drapes and blinds can block out heat, it said. BC Hydro also suggests opting for smaller appliances when cooking in order to save money and keep cool.

By The Canadian Press | News, Politics | August 1st 2017
Reports from the Race to a Safer World