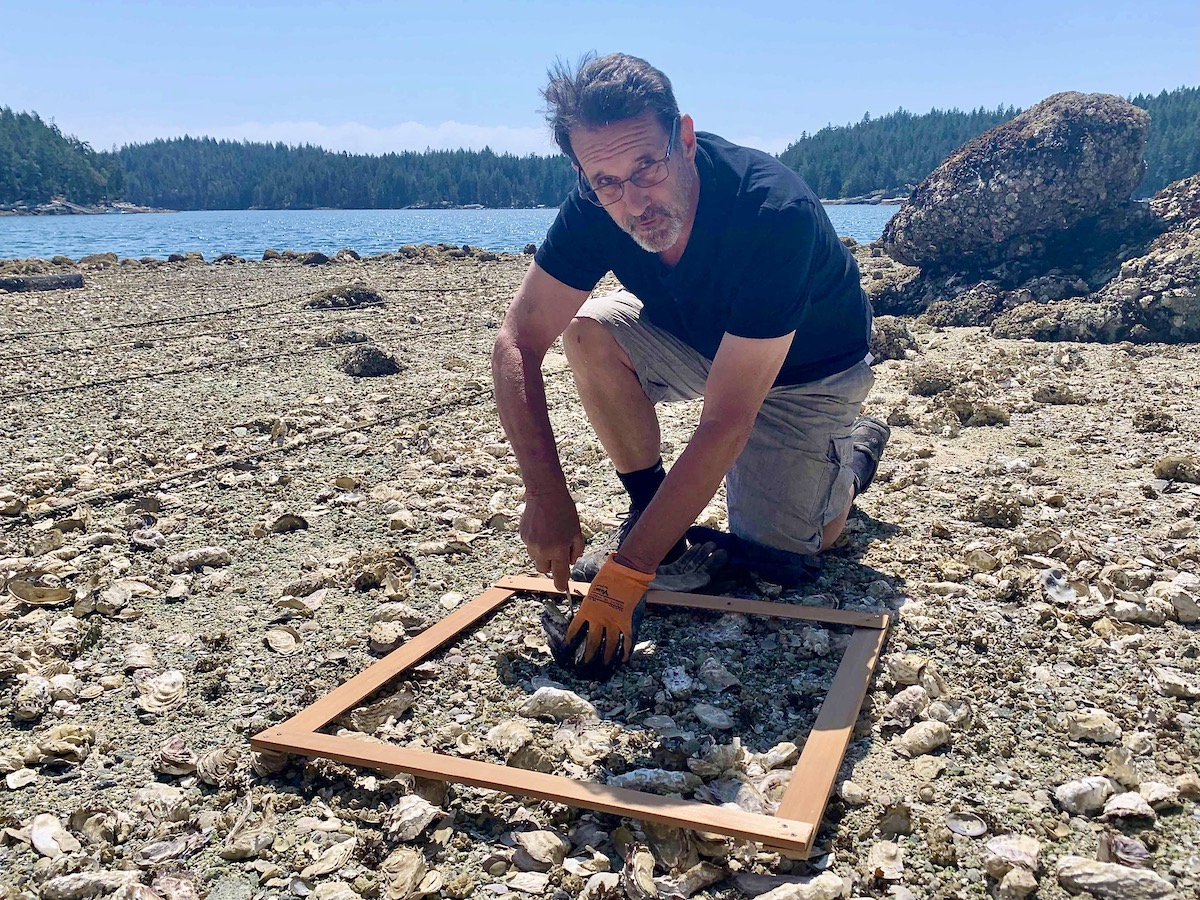 Dave Nikleva walks the shoreline of a Cortes Island beach nudging oysters with the toe of his boot.

“Dead. Dead. Dead,” Nikleva mutters as he goes along.

The shellfish farmer stoops over to pick up one bigger specimen for inspection before tossing it back on the beach.

The stench along this stretch of Gorge Harbour at low tide is tremendous. But it was even worse two weeks ago when a record-breaking heat wave cooked thousands upon thousands of oysters in their shells in the final days of June.

“They still had meat in them then,” Nikleva said.

A perfect storm of extreme heat paired with extra-low midday tides left Nikleva’s south-facing oyster lease baking in the sun for six hours at a time.

Now many of the feathery shells of the baby spats and small to medium oysters are empty having already been picked clean by crabs and gulls.

But some of the bigger oysters are still dying. Shells still mostly closed, they gush water and putrid goop when disturbed.

Nikleva’s oysters are just a fraction of the one billion marine intertidal animals that likely perished on the shores of the Salish Sea during the extreme heat event.

“I’ve never seen anything like it,” said longtime shellfish farmer Dave Nikleva after thousands upon thousands of his oysters perished in B.C.'s record-breaking heat wave.

“I’ve never seen anything like it,” said Nikleva, who has been producing oysters and clams for 35 years.

Oyster farmers on the front line of climate change

B.C.’s shellfish producers have been struggling with the slow burn of climate change for years as warming waters spur harmful bacteria and ocean acidification, among other changes, in the marine ecosystem.

“If you went back 20 years ago and told farmers they were going to experience 20 per cent mortality, they would have thought that was crazy,” said Jim Russell, executive director of the BC Shellfish Growers Association.

“But now that's kind of normal. And this normal keeps changing.”

But the record-breaking heat saw some areas on the typically temperate coast reach close to 40 C — double the seasonal average. And it led to some catastrophic losses for many shellfish farmers.

But those losses appear to be varied, depending on local conditions, said Russell, adding a full understanding of where and who suffered the greatest hits won’t be known for another couple of weeks.

In addition to the damages reported in Gorge Harbour, the hub of shellfish aquaculture on Cortes, there appears to be some big losses in Baynes Sound next to Denman Island and in Okeover Inlet on B.C.’s mainland.

It’s concerning since Baynes Sound produces more than 50 per cent of the shellfish coming out of B.C., Russell said.

And Okeover Inlet is reportedly the hardest hit, with some farmers with beach leases reporting up to 100 per cent mortality.

“It’s quite devastating for some of the farmers that have talked to me.”

The West Coast is big nationally, too, growing over half of Canada’s oysters and clams.

It remains to be seen how badly the sector will be impacted by the heat wave, Russell said.

But the nasty irony is that shellfish farmers had already been hobbled by COVID-19, which shuttered restaurants and export markets last year.

Many producers left last year’s oysters stockpiled on their beach to sell when markets improved as the pandemic lifted, Russell said.

Now, some farmers will take a double hit.

Plus, it takes two or three years to raise an oyster to market size.

“It’s devastating when you consider the crop cycle, and they’ve lost all three years,” he said.

“It’s going to be a major setback.”

After preliminary surveys, Nikleva figures he has seen at least a 30 per cent die-off along his seven-acre stretch of beach. And mortality among the prized, smaller half-shell oysters destined for restaurants appears even greater.

Nikleva lets out a sarcastic snort when asked if there are any government programs to help oyster farmers weather crop disasters.

He figures he’ll lose a third of his income off this beach for the next three years.

Yet, he considers himself somewhat fortunate since not all his shoreline oyster sites are directly exposed to the sun, and his deep-water oysters, growing on trays suspended from rafts, are OK.

Despite his losses, Nikleva is glad the heat wave and its dire impacts have truly seized the wider public’s attention at last.

All food producers are struggling to adapt to the changing climate, he said.

If faced with low tides and extreme heat again, Nikleva is considering using a pump and to spray seawater over the oysters to cool them. Or experiment with mesh pouches or bags for the oysters to see if they provide extra shade and retain some pooled water.

Scientists are also at work to mitigate the impacts of climate change on the shellfish industry.

Ocean acidification, which occurs as increasing carbon in the atmosphere gets absorbed by the ocean, poses a problem for shellfish, said Timothy Green, a researcher at Vancouver Island University (VIU).

Acidification drops the levels of calcium carbonate in the water that baby oysters and other shellfish need to build their shells.

Oysters are also vulnerable to increased levels of bacteria and new pathogens brought about by warming oceans and global transport, said Green, a Canada Research Chair in shellfish health and genomics.

Studying the genetics of shellfish adaptation to climate stressors and disease, Green is running a selective breeding program to make the Pacific oyster more resilient.

Three years into the project, Green hopes he’ll see some results at the five- and 10-year mark.

The research team is also experimenting to see if various types of farming practices can drop the mortality rates associated with climate change.

“We need to come up with solutions,” Green said.

“It hurts that we can't help industry and say, 'here’s the solution' just yet.

It's too bad that Mr. Green

It's too bad that Mr. Green spoiled this article by stating that there isn't a solution yet. May I please direct these narrow-minded individuals - and everyone out there - to the Green New Deal once again?!!! Even though it's policies propose systemic change, we can't deny that everything is CONNECTED, and that's what will save the planet! Mr. Nikleva declared the best bit of progress so far - that climate change is now much more in the media and the public conscience. So now it's up to the rest of us to push the politicians to ACT!!!