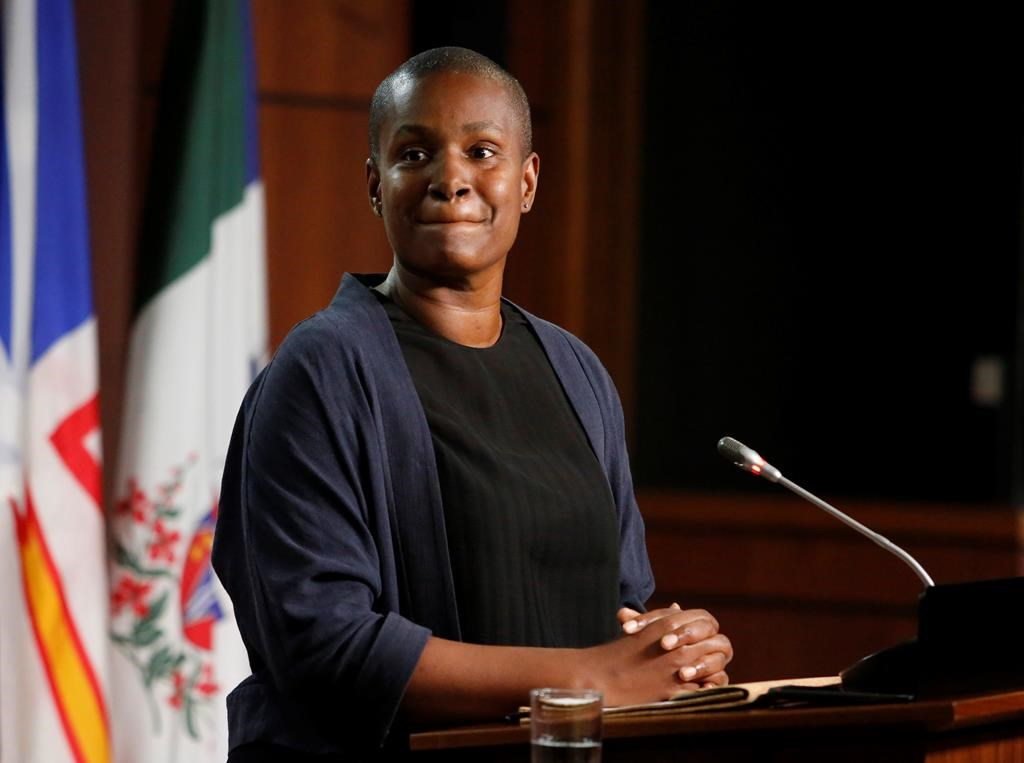 The move could ultimately result in Annamie Paul's party membership being revoked altogether, freezing her ability to lead the Greens ahead of a likely federal election this year. Photo by Patrick Doyle / The Canadian Press
Previous story
Next story

OTTAWA — Green Party executives have taken a first step toward suspending Annamie Paul's membership in the party she leads, the latest development in a feud that has threatened her future in the top job.

Dana Taylor, interim executive director of the Greens' main governing body, has kicked off a membership review that would suspend Paul's status and bar her from representing the party while it is underway, say three senior party sources. The Canadian Press granted them anonymity because they were not authorized to speak about internal matters publicly.

The process, as outlined in the members' code of conduct, could ultimately result in Paul's party membership being revoked altogether, freezing her ability to lead a political party she would no longer belong to, ahead of a likely federal election this year.

The review emerged from a special meeting of the federal council Tuesday night, where Taylor announced the probe would go forward. Paul, who sits on the 13-member body, was not invited to the virtual meeting, the sources say.

They say the stated reason for the review is that Paul launched legal proceedings against the party, an accusation disputed by officials close to the leader. The code of conduct says legal action against the Green Party of Canada by one of its members automatically triggers a review headed by the executive director.

All three sources say the legal proceeding referred to in the membership review concerns a cease-and-desist letter sent from Paul's legal counsel to a federal council member or members. The details of the letter and whether it constitutes a legal action against the party — and is thus grounds for a review — remain unclear.

Taylor and party spokeswoman Rosie Emery both declined to comment, while Paul was not immediately available on Wednesday.

The membership review follows a months-long battle between party factions, in part over clashing views about how the party and its leader should respond to the Israeli-Palestinian conflict.

Paul, who has led the party for nine months, faces a non-confidence vote by federal council on July 20 in a process distinct from the membership review. The non-confidence proposal requires three-quarters support in order to proceed to a party-wide vote the following month at a general meeting, where grassroots could render judgment on Paul's leadership.

Separately, the party brass has recently moved to withhold funding from Paul's campaign to win a downtown Toronto seat and temporarily laid off about half of the Green Party's employees last week, including all staff in the leader's office.

All this has happened while the party recovers from New Brunswick MP Jenica Atwin crossing the floor to the Liberals last month, leaving the Greens with two seats in the House of Commons.

Annamie Paul, who has led the Green Party for nine months, faces a non-confidence vote by federal council on July 20 in a process distinct from the membership review. #GreenParty #cdnpoli

Last month, Paul fired back against party executives in response to an earlier move to push her out, calling them out for “racist” and “sexist” accusations that were included in a letter obtained by The Canadian Press. She is the first Black woman to lead a federal political party in Canada.

Green Party membership can be revoked by a bare majority of council members present at a meeting following a review, the code of conduct says. The rules state that Paul, as a member of the federal council, would not be allowed to take part in any deliberations.

Membership rights are suspended until the matter is settled. A member is allowed 30 days to prepare their defence in front of party brass after being informed of a review.

The council is in an election period at the moment, with much of the current body poised to turn over as of Aug. 20. That leaves just enough time for executives to vote on their leader’s status as a Green following her month-long defence period before they vacate their council seats.