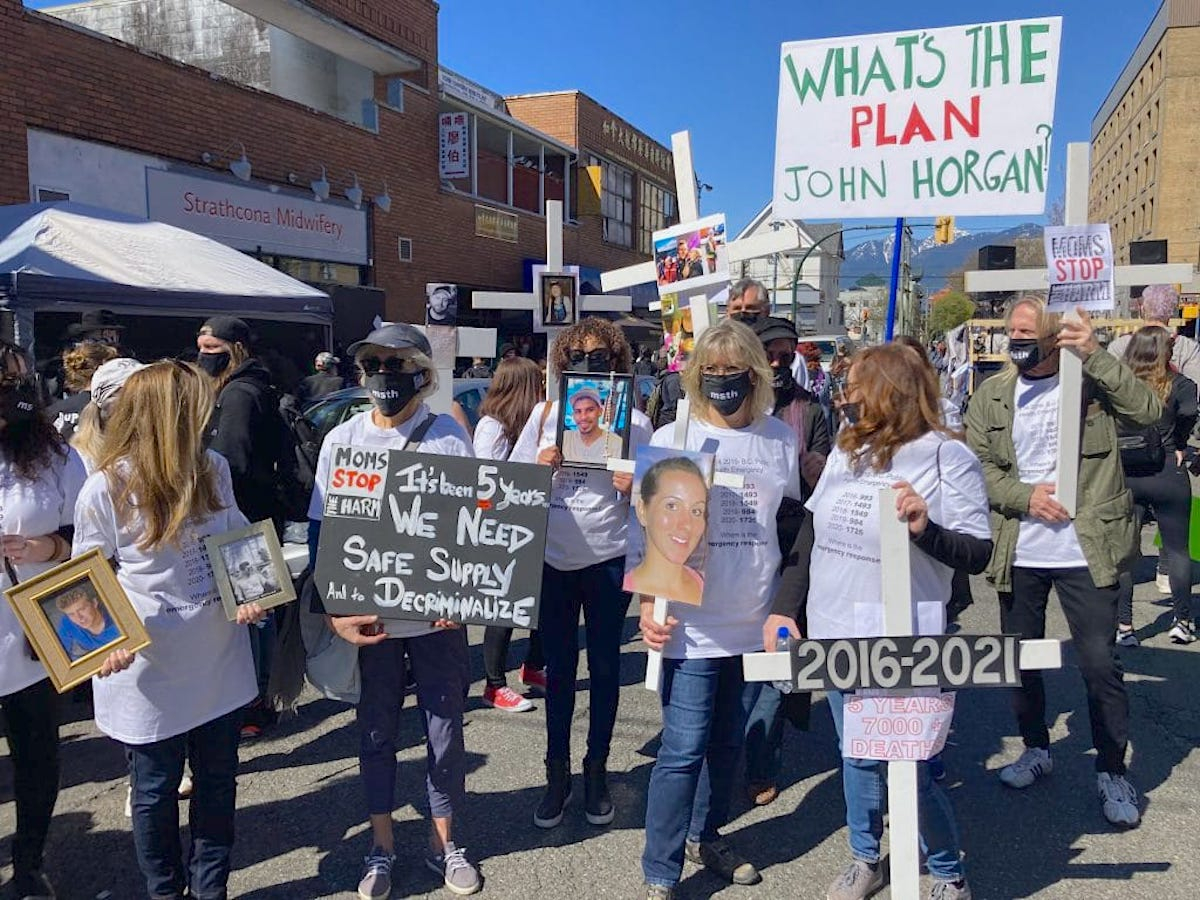 B.C. is expanding its safe supply program as a way to address deaths due to toxic street drugs. Photo of the 2021 memorial of B.C.'s overdose crisis by Nathaniel Canuel
Previous story
Next story

The B.C. government is expanding access to safe supply to provide more pharmaceutical alternatives to people who use drugs to curb skyrocketing deaths due to the toxic street supply.

The province will increase the range of prescribed drug options — starting with fentanyl tablets and patches and the injectable opiate hydromorphone in the first phase of the initiative. Other opiates and the introduction of stimulants will be added in later phases of the plan.

All the prescribed alternatives and pharmacy services to provide them will be covered by PharmaCare, the province’s prescription drug plan, said Mental Health and Addictions Minister Sheila Malcolmson on Thursday.

B.C. is the first province in Canada to introduce the public-health measure to separate people from the poisoned drug supply, Malcolmson said, adding the province is investing $22.6 million, as of the April budget, over the next three years.

“British Columbia is in the sixth year of the overdose emergency, with more than 7,000 lives lost,” Malcolmson said. “It is tragic, and it is unacceptable.”

Safer supply is a comprehensive response to the overdose crisis as the province continues to also build a treatment system, so everyone can get the care they need, she added.

“There is more to do, and we won't stop working until we turn this crisis around,” Malcolmson said.

The first phase of the policy will last 18 to 24 months and begin within already existing programs that prescribe alternatives and new programs, such as service hubs and outreach teams, that will also provide other necessary services.

BREAKING NOW: @DULFBC @VANDUpeople are handing out free heroin, cocaine and crystal meth in front of the Vancouver Police department offering a safer supply of drugs that were all checked and contain no fentanyl! Real #safersupply #harmreduction pic.twitter.com/FZjUKn8j3c

Despite calls from advocacy groups that want low barriers to safe supply, alternatives to street drugs will still need to be prescribed, the minister said.

“We’re entering the sixth year of the overdose crisis, and we're still sort of picking at it around the edges,” says Scott Bernstein of the Canadian Drug Policy Coalition on B.C's plans to expand safe supply to curb deaths from toxic street drugs.

Drug policy analysts and drug-user advocate groups commended aspects of the new plan, but described it as being incremental in nature and not broad enough to meet the scale of the crisis.

In the first five months of this year alone, 851 people have died from poisoned street drugs — approximately five fatalities a day.

The fact safe supply will become permanent — rather than just a pandemic measure — and include new drugs covered under PharmaCare are positive moves, said Dr. Bernie Pauly, a scientist with the Canadian Institute for Substance Use Research.

“It’s not a game-changer,” Pauly said, also a professor with the University of Victoria's School of Nursing.

“In some ways, things are still very much the same, because it's still being delivered within a prescriber-driven model.”

As demonstrated by safe supply measures launched during the pandemic, there are barriers for people who use drugs in accessing drug alternatives in clinical settings, Pauly said.

Many doctors are reluctant to prescribe safe alternatives, and health authorities have a limited amount of programs up and running that can provide those services, she said.

What’s more, those programs take time to establish and are costly to run, she said.

Many people who would access safer supply in a clinical setting are likely to be the small number of people already connected to existing programs, Pauly said.

“It's not really reaching, you know, all people who would be at risk of overdose.”

Employing the wider use of fentanyl patches is a good move, Bernstein said, given people using toxic street drugs containing the powerful opioid are likely to use that alternative.

However, Bernstein also expressed concerns about providing safe supply through prescriptions within a program model.

“What's really called for here is something that's a bit outside the box of the medical model,” he said.

While technically the province must abide by federal drug regulations, B.C. could still ask Ottawa for various exemptions, and the senior government could certainly allow for some emergency response, he added.

And relying on the clinical programs to provide safe supply is an approach that potentially leaves out rural, remote and Indigenous communities.

“Who’s going to set up these programs in northern B.C.?” Bernstein asked.

“There's no money, no resources or infrastructure for it. Program service seems like a very urban-centred model.”

Not employing the approximately 1,500 pharmacies across the province to provide safe supply is also a missed opportunity, especially in smaller communities, he said.

“Why can't we create a model that uses the pharmacies as distribution hubs?”

“And they really need to come up with an alternative for people that just smoke,” said Knott, who works with SOLID Outreach, a peer-based harm prevention organization based in Victoria.

All regional health authorities are mandated to come up with a plan to implement safer supply programs, which will be reviewed by the province at the end of the month.

“Everyone's working as quickly as we can to implement existing safe supply programs and to build further capacity as we bring more prescribers on board and get new programs online,” she said.

But Knott also believes people are dissuaded from accessing safe supply in a clinical setting because they often have to ingest the drugs while witnessed by a professional, or perhaps provide urine samples.

“It can be kind of punitive, and that’s very challenging for a lot of people.”

Advocacy organizations would like to see some peer-run groups being able to distribute safe supply inside an integrated framework, Knott said.

“You know, like a heroin compassion club, similar to the marijuana model,” he said, noting medical cannabis was an illicit substance at one point, too.

The province needs to do more, quicker, given the number of people dying from toxic illicit drugs on a daily basis, Bernstein said.

“It’s not an emergency response, especially if we compare this to COVID-19, where we put our entire society on pause for a year,” he said.

The province needs to shift from a drug prohibition model and create a legally regulated supply of drugs without barriers within a public health system, he added, noting nobody would throw so many roadblocks in the way of a diabetic trying to access insulin.

“But now we’re entering the sixth year of the overdose crisis, and we're still sort of picking at it around the edges.”