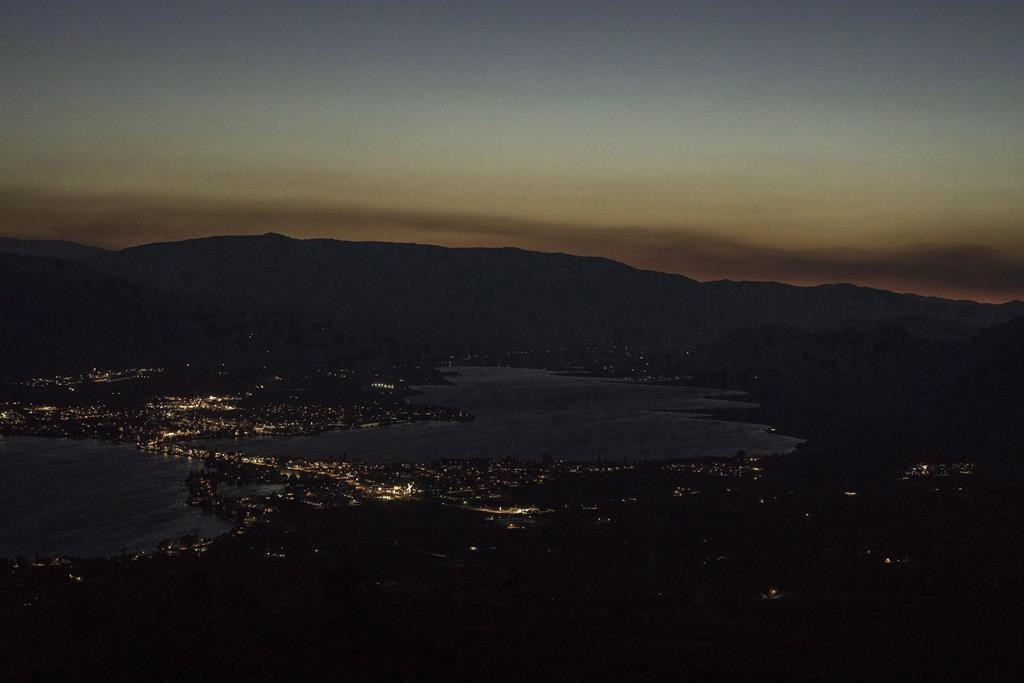 Looking high above the small town of Osoyoos B.C. in the southern Okanagan the glow of smoke and fire illuminates the night sky on Thursday July 19, 2018. THE CANADIAN PRESS/Jeff Bassett
Previous story
Next story

VANCOUVER — British Columbia's public safety minister has declared a provincial state of emergency over the growing wildfire threat to prepare for potential mass evacuations and help secure accommodation that might be needed by evacuees.

Mike Farnworth said he made the decision based on information from officials that weather conditions will lead to more severe fire behaviour and the potential for more evacuations.

"In a briefing last night, I received word that we'll be facing a few days of very difficult weather in the Interior," Farnworth said in a statement.

The state of emergency goes into effect on Wednesday and gives government agencies, the fire commissioner and the RCMP the authority to take whatever action they deem is necessary to fight the wildfires and protect people and communities.

In addition to securing accommodation, it empowers the government to issue travel restrictions if necessary or commandeer aircraft or trucks from the private sector, although Farnworth said the private sector has already provided needed resources.

He said the declaration does not unlock additional firefighting resources on the ground but he wants to assure B.C. residents that the province is deploying all available personnel and equipment to fight the fires.

More than 3,000 firefighters and support staff are battling the blazes. Some have come from Alberta, New Brunswick and Quebec, while about 100 firefighters are set to arrive from Mexico on Saturday. Officials are also in talks with Australia.

“We have reached a critical point," Farnworth told a news conference.

Nearly 300 fires were burning across the province on Tuesday, including several that were encroaching on communities that have issued evacuation orders or alerts.

The government said 40 evacuation orders affected about 5,700 people or almost 2,900 properties in the province. There were also 69 evacuation alerts affecting just under 33,000 people and about 16,000 properties. The alerts tell people they should be ready to get out of their homes on short notice.

B.C. has declared a state of emergency over the growing wildfire threat to prepare for potential mass evacuations and help secure accommodation that might be needed by evacuees. #BCWildfires

Cliff Chapman, director of provincial operations for the BC Wildfire Service, said crews are working tirelessly to suppress the fires but he warned it's likely to get worse.

Strong winds are predicted to come up from the United States, fanning the flames in the B.C. Interior over the next 48 hours. No moisture is expected, and the southeast could see another batch of lightning that will ignite more blazes, he said.

It means firefighting efforts and control lines will be challenged.

"We have the potential to see significant fire behaviour across the province, in particular in the southern half of the province where the conditions remain extremely dry and extremely volatile," he said.

Shortly after the news conference, the BC Wildfire Service issued a wind advisory for Tuesday through Thursday in the Interior, southern Interior and southeastern B.C.

It's too early to make a direct comparison, but the conditions resemble those in 2017 and 2018, British Columbia's worst wildfire seasons on record, Chapman said.

There have been 1,145 fires sparked so far, including 145 in the past week alone.

The B.C. government has been criticized for not calling a state of emergency sooner. That continued Tuesday with the B.C. Green party calling the declaration a necessary but overdue step.

“It is difficult to understand why the B.C. NDP is only acting now, when local representatives and experts have been calling for a state of emergency for weeks, and some taking matters into their own hands within their jurisdiction," Green Leader Sonia Furstenau said in a statement.

As recently as Friday, Premier John Horgan said there would be few advantages to declaring a provincial state of emergency because he said all available resources were already in place.

Farnworth defended the about-face on Tuesday, saying he made the declaration based on advice he received Monday night from officials at the BC Wildfire Service and Emergency Management BC, regarding the worsening forecast.

This report by The Canadian Press was first published on July 20, 2021