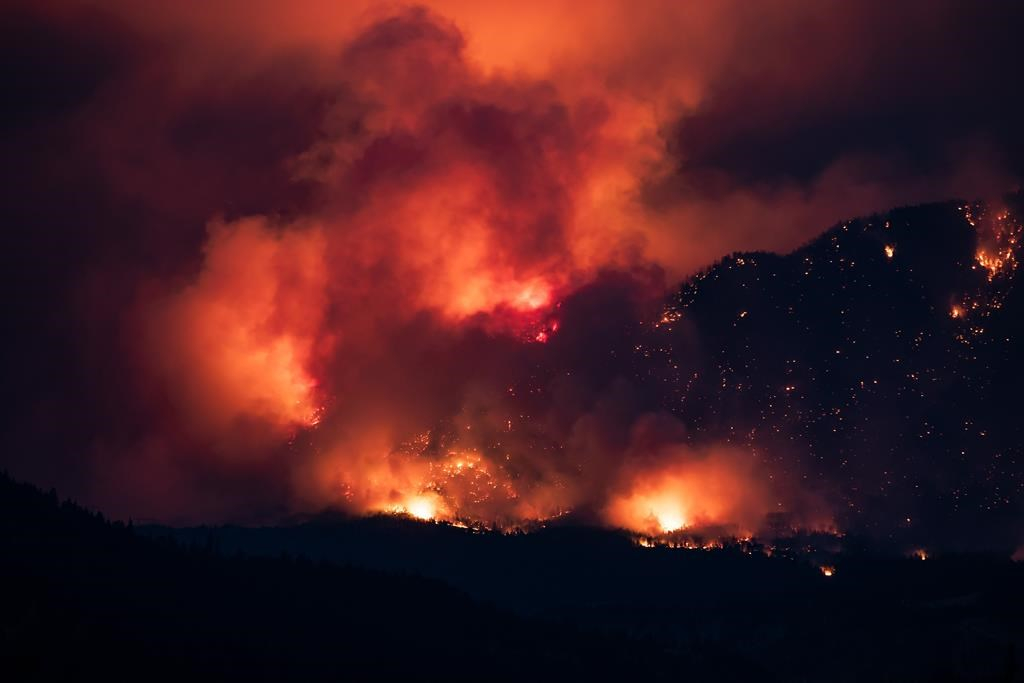 A wildfire burns on the side of a mountain in Lytton, B.C., on Thursday, July 1, 2021. File photo by The Canadian Press/Darryl Dyck
Previous story
Next story

More than 1,400 properties in British Columbia's Cariboo region have been placed on evacuation order as wildfires rage across the province.

The order from the Cariboo Regional District covers roughly 1,000 properties south of 100 Mile House and 482 properties in the Canim Lake area, with residents warned of "immediate danger" from wildfires.

The District of 100 Mile House, roughly 200 kilometres north of Kamloops, has been placed under an evacuation alert, which means residents have been told they may have to leave their homes with little notice.

The Thompson-Nicola Regional District has issued an evacuation order for 117 properties near Young Lake due to the encroaching Sparks Lake blaze, which remains out of control. The Grizzly Lake wildfire, which currently covers more than 28 square kilometres, has prompted the Regional District of Bulkley-Nechako to issue an evacuation order for the area southeast of the 900 and 800 Road, including Naltesby Lake and Little Bobtail Lake.

Evacuation alerts have also been issued for the community of Cache Creek and two properties in Momich Lake, with residents asked to pack all essential items in case the alert is upgraded to an order.

It comes as much of central and eastern British Columbia is under a special weather bulletin warning of smoky skies, with an Environment Canada meteorologist cautioning about the long-term potential for smoke.

Environment Canada issued the special air quality statement warning about the smoke for the next few days in areas stretching from the Interior of B.C. to Yukon and the Alberta boundary.

Doug Lundquist, a meteorologist with the Meteorological Service of Canada, said B.C. residents should be prepared for smoky skies to linger into the fall.

"We're going to see this for months," he said in an interview. "There's smoke all over, from Alaska down to Mexico. All we need ... is the wind to go the wrong direction and bring it back up from other locations."

Four areas in the province also remain under a heat warning including the Fraser Canyon where the village of Lytton was destroyed by fire last month, with predicted daytime highs of up to 38 C.

More than 1,400 properties ordered to evacuate in central B.C. due to wildfires. #BC #Wildfires

Lundquist said the extreme heat that gripped much of the province and shattered records is a "once in my lifetime" event.

"I've done this job for 34 years and I don't remember seeing anything as extraordinary as this," he said. "The smoke is coming a month earlier than we've seen before and we've never, ever had the heat like we've had at the end of June."

The BC Wildfire Service said much of the central part of the province is at extreme risk of wildfires with more than 300 fires burning.

Two dozen of them are highly visible or pose a potential threat to public safety. More than 1,760 square kilometres of land has burned since the wildfire season started on April 1.

The wildfire service said in a statement that more than 98 per cent of that area is from wildfires crews are currently battling.

Prime Minister Justin Trudeau has convened the government's incident response group partly because of the wildfire situation in B.C. to discuss preparations the federal government can take.

The government said in a statement that Trudeau and cabinet ministers who are part of the group have agreed to closely monitor the situation and deal quickly with any requests for help from their provincial counterparts.

Horgan will ask PM for military assistance with wildfire prevention