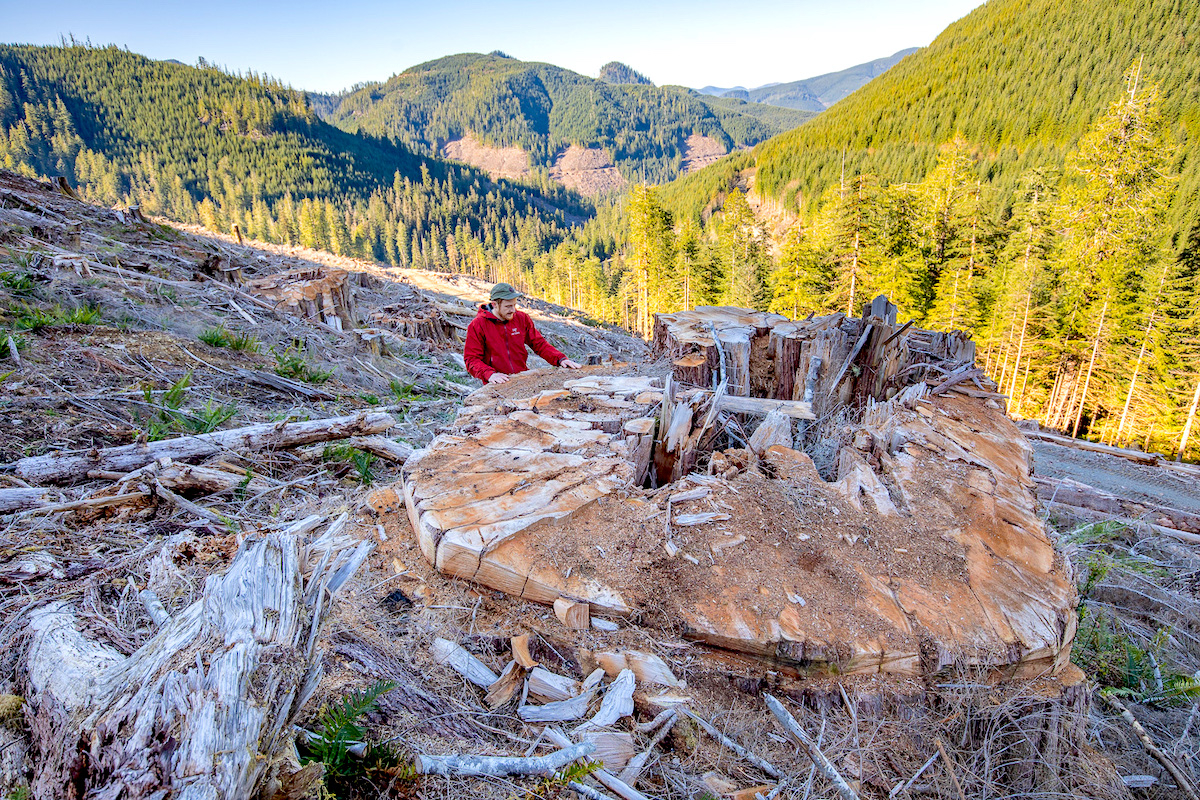 The certification of wood products from logging operations — including in B.C.’s old-growth forests such as the Caycuse watershed (above) — as sustainable is misleading, say complainants pushing the Consumer Bureau to investigate. Photo by TJ Watt
Previous story
Next story

Six individuals backed by a trio of environmental organizations have formally requested the federal Competition Bureau to investigate the Canadian Standards Association (CSA) for labelling Canada’s forestry goods sustainable as false and misleading.

Under the CSA’s current certification regime, the logging of B.C. forests such as hotly contested regions of old-growth on southwest Vancouver Island would be deemed sustainable — including unprotected areas of the Fairy Creek watershed, the epicentre of activist logging blockades for close to a year.

“What serious standards organization would certify the logging of the remaining three per cent of (B.C.'s) most valuable big tree forests as sustainable?” asked Vicky Husband, one of the complaint signatories and a renowned environmentalist.

“This certification is meaningless, designed to fool consumers into thinking they’re doing the right thing by buying these products.”

The investigation request to the Competition Bureau on behalf of the signatories was filed by Ecojustice, a non-profit environmental law firm, with the support of environmental groups Stand.earth and the Ancient Forest Alliance.

The complainants also want the CSA to pay a $10-million fine towards conservation projects should the bureau — responsible for the administration and enforcement of the federal Competition Act — deem the CSA’s forestry sustainable labelling is false.

The coalition also recommended the CSA be ordered to publicly retract certification claims of forestry sustainability if the case is verified.

Canada’s weak environmental laws give logging companies control over the forests, and allow the industry the discretion to shape a certification process that allows it to flog destructive logging products in domestic and international markets as sustainable, said Devon Page, executive director of Ecojustice.

“What serious standards organization would certify the logging of the remaining three per cent of (B.C.'s) most valuable big tree forests as sustainable?” said environmentalist Vicky Husband, who wants the Canadian Standards Association investigated.

“Of course, it makes no sense that industry sets the certification standard,” Page said.

And weaknesses in the CSA’s forest certification system make it incapable of guaranteeing that forest management is sustainable, he added.

Nobody — not the CSA, the federal or provincial governments, or the logging companies themselves — is required to verify that the parameters of the sustainable certification are met in practice on the ground, he added.

CSA’s certification scheme includes language on conserving biological diversity, the recognition of environmental, economic, social or cultural values, and input from the public, but it’s a matter of form over substance, Page said.

“You could call it a process standard, not a performance standard,” he said. “CSA uses sustainable forest management language throughout their certification scheme, but at the end of day, they don’t require it.

“They give industry the discretion to determine whether they will do anything.”

The complaint establishes how the CSA’s claims are false and materially misleading based on a review of the wording of the association's standards and in the context of old-growth logging in British Columbia’s forests, said Page.

While there have been few changes to the status quo logging practice, sustainable forestry certification systems have expanded rapidly in Canada, Page said.

Canada has 13 million hectares of forest certified to the CSA standard, two million of which are in B.C. And Canada has more certified forest area than any other country in the world, mostly to industry-led systems, according to the complaint.

Governments see forest certification as a means to reduce their role in forest industry oversight, pointing to independent third-party audits as evidence of compliance with regulations, the coalition stated.

It’s unacceptable that the continued logging of ancient forests is deemed sustainable, said Grand Chief Stewart Phillip, president of the Union of BC Indian Chiefs, and another individual in the complaint.

The practice also infringes on Indigenous rights and title as First Nations seek to sustainably protect, manage, and steward the forests they hold jurisdiction over, Phillip said.

“In these times of renewed focus on the need to protect old-growth forests and their crucial importance for biodiversity and the climate, it’s clear that this logging is not remotely sustainable and is at odds with B.C.’s commitment to implement the Declaration on the Rights of Indigenous Peoples Act.”

A spokesperson from the CSA was unavailable for immediate comment before publication deadline.

It can't be! Transnational

It can't be! Transnational logging companies would never lie to us!
Oh wait . . .

Old growth rainforest (in BC,

Old growth rainforest (in BC, naturally) is more threatened by climate change than it is by logging. Notwithstanding tree-huggers’ propaganda which focuses exclusively on the iconic big trees of the Coast (as if only they constitute OG), tens of millions of acres of OG are preserved in BC—already. The hyperbole OG preservationists indulge in includes the wonky notion that, by stopping OG logging now (most of which occurs in the Interior, not on the Coast), that climate change can be averted to some degree.

Their rhetoric talks about “destroying OG” in the same breath as “destroying biodiversity”—as if either is really being totally destroyed by logging. Over 12% of the province is already preserved in parks and ecological reserves—never mind the substantial, if somewhat fragmented, network of riparian buffers and wildlife corridors within operational areas—which, BTW, are the areas of greatest biological diversity. Readers should also know that most rainforest OG is of the lowest biodiversity: stagnant red cedar/western hemlock/salal stands.

Rhetoric is, by nature, persuasively biased and, therefore, often misleading. In the alarmist narrative that preservationists have recently adopted or spun out of a local and worthy cause (protecting the last intact valley of OG in the region of southwest Vancouver Island) wants to include all OG in the whole province and demand the virtually impossible: complete moratorium of OG logging “RIGHT NOW!!!”

The current rhetorical bent is to assert that OG is a current sink for CO2. It is not—in fact, most OG stands are net emitters of CO2. No doubt they have accumulated a lot of CO2 in their lives, but they are now topped out, not growing as much as they are decaying (and decay releases CO2). The propaganda has been effective insofar as people have adopted an unexamined and uneducated notion that, we can safely presume, they’ll gradually be disabused of.

There are plenty of good reasons to limit OG logging further than it already is, but CO2 sequestration ain’t one. Nevertheless, it’s the flavour of the month.

OG logging is never intended to sustain OG logging: the subsequent rotations are too short for OG to develop. OG logging is officially intended to replace slow-to-non-growing OG with fast-growing younger stands. From a prudential point of view, that approach yields more wood fibre over time. The CSA definition of sustainable naturally does not mean OG is protected or sustained (as mentioned, OG is never sustained by harvesting practice —except, perhaps, in lodgepole pine stands which are OG when only 120 years old).

But, typical of rhetorical hyperbole, the CSA claim of sustainability has been spun into an alleged, intentional lie when, in fact, it is not. What is sustained is harvest of early-mature forests, not late-life OG. It was never claimed to be anything but.

The case(s) to preserve more OG needs to reject hyperbole and focus on reality and what’s possible. Ending all OG logging is simply not on, but focusing on the biggest stands for preservation in some proportion is possible. Further, rhetoric needs to stop misleading people as to the value of OG to global climate-change which, in the propaganda, is preposterously exaggerated and relies on citizens’ mostly fuzzy understanding of climate-change and forest ecology. The fact is, If all OG logging were stopped today, it would have zero measurable effect in countering human caused CO2 pollution which vastly overwhelms whatever OG could do to ameliorate it.

Further still, whatever amount of OG is added to what is already preserved, has to address the undeniable fact that rainforest ecosystems (where summer water deficits never occur and wildfire is limited) are rapidly becoming non-rainforest ecosystems (where summer water deficits are pronounced and wildfire is an ever-present, summertime risk). In other words, it might be a great idea to preserve a certain proportion of remaining OG (in addition to what’s already preserved, remember), but climate is changing the ecosystems on which many OG ecosystems depend, extirpating many of the life-forms these giants are ecologically adapted to, and significantly diminishing their ability to survive. That factor alone means whatever stands are targeted for preservation have to be in the wettest soil niches. And that means not all OG is feasibly preservable. It’s not current OG logging that has made it this way: it’s global warming caused by combusting petroleum and wood (half of all wood harvested in the world is used for cooking and heating fuel) into the atmosphere (which still dwarfs wildfires attributed to climate change).

No, stopping all OG logging now will not ameliorate the challenges of climate change to any useful degree. That horse left the barn decades ago.

Let’s try to keep the hyperbole down and focus on the doable.