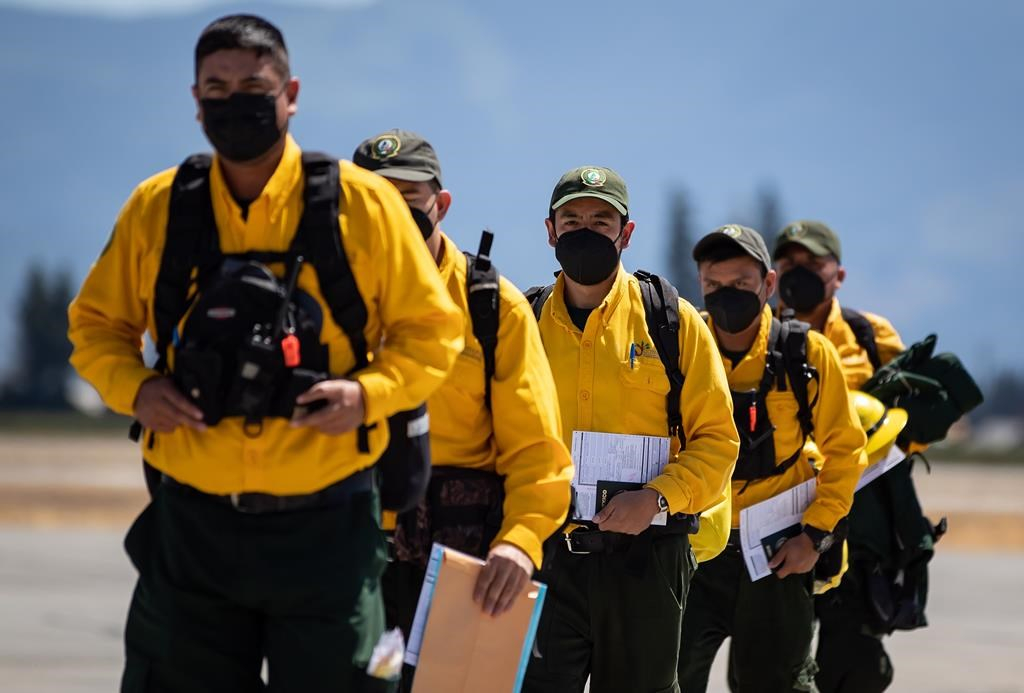 Firefighters from Mexico walk across the tarmac after arriving on a charter flight in Abbotsford, B.C, on Saturday, July 24, 2021. File photo by The Canadian Press/Darryl Dyck
Previous story
Next story

A combination of drought, heat and drier fuels is causing larger areas to burn in British Columbia, says an expert.

Kira Hoffman, a post-doctoral researcher with University of British Columbia's faculty of forestry, said climate change is expected to create longer wildfire seasons because of more drought, which leads to drier trees and grasses.

All of this leads to longer fire seasons and more area burned even though there are fewer blazes, she said.

The province has seen 4,090 square kilometres scorched so far, which is about four times the year-to-date averages over both five and ten years, she said in an interview Sunday.

The BC Wildfire Service said there were 257 blazes burning in the province as of Sunday afternoon.

The number of wildfires is one fewer than Saturday's update, and down from about 300 earlier in the week.

There are now 58 evacuation orders in place, affecting about 4,400 properties.

Another nearly 17,500 properties are on evacuation alert, meaning residents have been told to be ready to leave on short notice.

A combination of drought, heat and drier fuels is causing larger areas to burn in British Columbia, says an expert. #BC #Wildfires

Desrosiers said the heat wave in late June and early July added to the increase in wildfires by drying out forest fuels.

"The drying that we would see in generally like a month to a month-and-a-half happened in a matter of seven days," she said.

"So that made things a lot more susceptible to ignition and that's kind of what happened when we got a lot of lightning then that resulted in many new fires."

The province is also battling lack of water with seven areas under Drought Level 4 restrictions, which are the second-most severe on B.C.'s scale of five.

The areas covered include the Salmon, Coldwater and Nicola rivers in the Thompson-Okanagan; the Kettle River, Lower Columbia Basin and West Kootenay Basin; as well as the Eastern Vancouver Island Basin.

Drought Level 4 can adversely impact fish and ecosystems with water shortages being reported in several private groundwater wells, said a news release from the province.

Hoffman said vegetation in forests dried out much earlier this year due to a lack of rainfall and record-setting temperatures that added to the increase in wildfires.

Firefighters have become "really good" at putting out wildfires to the point where forests have an overload of dead and dry fuel in the forests, she said.

"We have a problem where we have a huge fuel load in our forests, and a lot of these fires are becoming insuppressible, so they're very difficult to control," she said.

Wildfires in the province are "complicated" by insect outbreaks, diseases, high intensity winds among other things, Hoffman said.

"That would have, you know, been mitigated by previous wildfire but they're more," she said. "Now they're contributing to extreme wildfire events."

This in turn has led to fewer but more higher intensity fires, she added.

One of the ways to mitigate wildfires, Hoffman said is to have prescribed burns as were done by Indigenous people.

Bob Gray, from Chilliwack, B.C., who consults for local, provincial, state and tribal governments across Canada and the United States, had said the province should burn tens of thousands of hectares every year to reduce fallen branches and leaves in forests. The Forests Ministry said it burned an average of 50 square kilometres annually from 2010 to 2019.

Hoffman said prescribed burning is considered a "risky tool" by many, but studies have shown that when done well the probability of "fire escape is very low."

"We do need suppression. We need it in the summer months when we are dealing with really hot and dry conditions and when we have fires that may impact communities," she said.

"But then we also need mitigation in the spring, fall and winter."

This report by The Canadian Press was first published July 25, 2021.

B.C. is in a state of climate emergency with no emergency plan