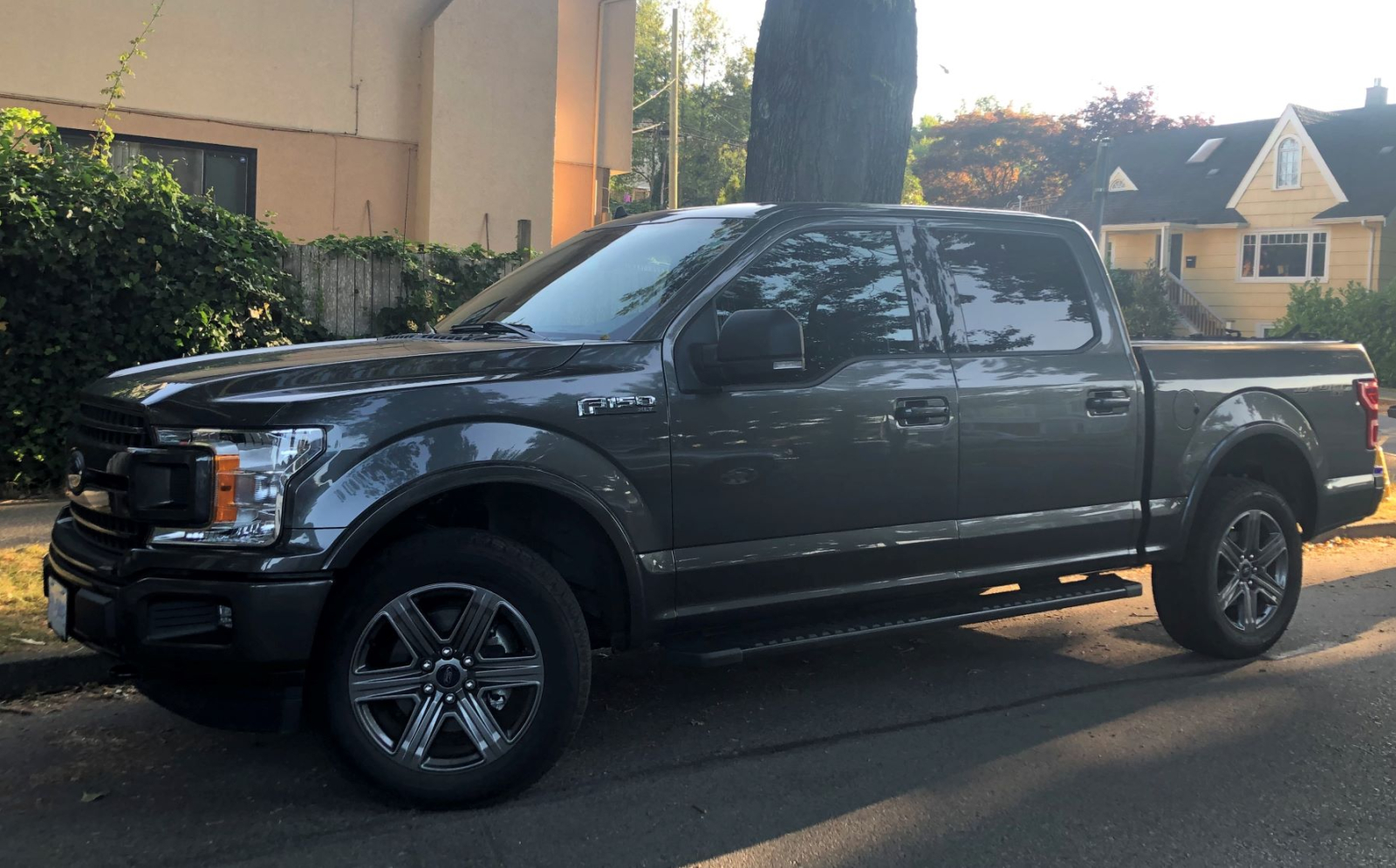 Trucks like this one in East Vancouver are ubiquitous in Canada, even in inner city suburbs. Photo by: Adrienne Tanner
Previous story
Next story

Jason Kenney may have appointed a new minister of culture earlier this month, but culture wars are clearly still the purview of the premier. His latest skirmish involves a broadside against the “Toronto” Globe and Mail for a column it published criticizing Canada’s love affair with the pickup truck. “I’m happy to say that ~40% of the vehicles on Alberta roads are pickups,” he tweeted, in what has to be one of the strangest examples of Albertan virtue-signaling to date. “Maybe Toronto columnists should try getting around this province during a prairie blizzard in a Smart Car.”

It wasn’t just the Globe and Mail making the case against pickup trucks, mind you. About a week before it hit publish on the column, a piece by Toronto writer Davide Mastracci made the case for banning pickup trucks outright — one that got the attention of the culture warriors over at Fox News. Both pieces make the same general argument, which is that pickup trucks — which remain the top selling class of vehicles in Canada — are bad for the environment, dangerous to other human beings, and inappropriate to life in an urban environment.

This isn’t just a Canadian problem. As TheDrive’s Brett Berk wrote in a 2019 piece, “Americans are batshit crazy for pickup trucks.” Both their love affair and ours have important costs, and they continue to grow alongside their popularity. First and foremost, there are the associated greenhouse gas emissions, which are far higher than the smaller vehicles that used to dominate our streets and showrooms. According to a 2018 City of Toronto report, a Honda Civic spits out 149.6 grams of carbon dioxide for every kilometre it travels, compared to 256.5 grams for the best-selling Ford F-150. For what it’s worth, the Toyota Prius Prime checked in at just 6.2 grams.

Those emissions reflect the growing size of pickup trucks, which can tip the scales at the equivalent weight of three Honda Civics. And while pickups have become more fuel-efficient in recent years, the sheer number of them on the road is overwhelming that progress when it comes to our collective greenhouse gas emissions. In 2019, 74 percent of the 1.92 million new vehicles sold in Canada were light trucks, and some industry experts think that will hit 80 percent soon enough.

But the growing size of the average light-duty truck, and its soaring share of the overall vehicle fleet, has other consequences. Their height and shape makes them a growing threat to pedestrians, cyclists, and other motorists, which has the perverse effect of pushing some people to buy them as a defensive safety measure. As a recent Equiterre report noted, accidents involving pickup trucks are 158 percent more likely to result in the death of the driver of other vehicles than ones involving smaller cars.

It gets worse for those who aren’t behind a wheel of some sort. Cyclist fatalities are at 30-year highs in the United States, while pedestrian death rates have followed a similar trajectory. The culprit, as Outside’s Joe Lindsey wrote in 2020, is increasingly obvious — and increasingly dangerous. Light-duty trucks and SUVs are now so tall that they have blind spots in front of them, right where pedestrians and cyclists tend to be. They also impact those potential victims at much more dangerous heights and angles than a smaller vehicle would. “The bigger SUVs and trucks get,” Lindsey wrote, “the more menacing they are to people on foot or on bikes.”

Jason Kenney is a career politician from the #Toronto burbs. He transformed his image as a blue-collar Albertan behind the wheel of a pickup, writes @maxfawcett for @natobserver. #pickuptrucks #abpoli

Ironically, most people don’t even use their pickup trucks for their stated purpose. According to U.S. data, 75 percent of truck owners use their vehicle for towing one time a year or less. Indeed, the vast majority of pickup truck owners are driving vehicles their parents or grandparents wouldn’t even recognize as pickups. Last year, more than eight in ten new pickups came with so-called “crew cabs” that cannibalize the long beds that characterized the classic pickup truck, essentially turning their modern offspring into turbo-charged station wagons. As Lindsey suggested in his piece, “the result of all this is a vehicle fleet that doesn’t even remotely match our uses. In our society, accountants drive lifted Ram 2500’s to the office, and parents pilot empty Suburbans to pick up a sack or two of groceries.”

Nowhere is that more true than in Alberta, where the pickup truck has transcended both utilitarian concerns and marketing magic and become a symbol of cultural authenticity. Here, a career politician from the suburbs of Toronto can transform himself into a blue-collar Albertan simply by stepping through the driver’s side door, and win an important election in the process. It is a powerful political totem, and one that won’t disappear any time soon.

But if Canada is going to meet its emission reduction targets, and Alberta is going to play its part, we have to start seeing the once-humble pickup truck for what it is — and what it isn’t. If Jason Kenney is serious about his province addressing climate change, he can lead by example and trade in his favourite political prop for something a bit less obnoxious.

Why does government allow an

Why does government allow an arms race on the roads we have it build for us?

I am growing rather angry at

I am growing rather angry at the government subsidizing of fossil fuels, I do wish that this government would stand up for what Canadians want, sincere climate change, low emission goals.
Stop this net zero false news that if you pollute and do well in other aspects you balance out...
Take the fossil fuel subsidies and use them for EV sales rebates for the Canadian consumer. If they really care about the environment they can do a lot more to reach 2050 earlier than anyone else.

"Ironically, most people don’t even use their pickup trucks for their stated purpose." (ahem? - According to U.S. data. - about who?) Where IS this author? "75 percent of truck owners use their vehicle for towing one time a year or less." Maybe. So what? People in rural areas use the flatbed all the time. Moving farm equipment, parts, livestock, farm supplies, feed, appliances, weekly or monthly groceries, garden equipment, you-name-it, all while children are safe in the backseat of the crew-cab, on the way to the dentist. There is no corner store or supermarket just around the corner. I love the National Observer but this article gets a big thumbs down.

I believe the author was

I believe the author was focussing on the urban use of pickups….

It'd be interesting to see

It'd be interesting to see what would happen to vehicle sales, both in total numbers and in how well different classes of vehicle sold, if they banned car (and "light truck") advertising.
There's a whole lot of dollars going into propaganda pushing people to use these things, and propaganda for "light trucks", pickups and SUVs, dominates because the car companies make bigger margins on them. They want people buying big expensive vehicles, not cheap efficient little ones. The oil companies being happy about it is just the icing on the cake.

After a lifetime in Toronto

After a lifetime in Toronto as a cyclist who did most travel by bicycle, I now live in rural Nova Scotia. My partner and I share the use of a 2012 eco boost pick up truck with a camper back.
Living here, a truck with high clearance and the ability to carry significant loads is an advantage if not an absolute necessity. We do not have the conveniences of urban centres and we experience significant weather in exposed areas without services.
There have been times when my safety was determined by the truck I was driving. Sadly the rural realities of life are often little understood or appreciated by those who live in larger centres.

I believe the author was

I believe the author was focussing on the urban use of pickups.

A new low for N O. To actually print the statement "make a case for banning pickup trucks" just goes to show how totally out of touch with reality this organization is. I do agree that there is many unnecessary trucks and SUVs out there but to try and say that all of them are not necessary just means somebody has been in Covid quarantine with their mask on a little too tight too long. Does your "research" tell how many of those trucks sold are for fleet and Contractor sales? Fortunately this is just an opinion piece and not real news.

Everywhere I have travelled

Everywhere I have travelled in Europe, South America, and Asia, the typical commercial truck and pickup size is similar to North America’s ‘quarter ton’ pickup size. So why do North Americans feel it is necessary to have a half ton pickup or bigger, regardless of whether it’s for private or commercial use?

The vast majority of people

The vast majority of people in Canada lives in cities where you don't need a big pickup truck to go to the grocery store. I understand the need for these kind of vehicles in rural areas where the roads are not always well maintained and people don't have other means of transportation. But it's a minority of people who lives in rural area, that doesn't justify the number of these vehicles sold.
But the problem in cities is not only resulting in more pollution caused by these bigger vehicles; they are dangerous. They also take a lot of space in areas where parking is scarce. These problems are not only related to pickup trucks, SUV's (they are also getting bigger and bigger) are also contributing to the rise of greenhouse gases. A recent study by the International Energy Agency (IEA) has calculated that if all the GHG emissions of SUV's around the world were put together and considered as a country, SUV's would be the seventh largest emitter of GHG in the world.
In Canada, GHG emissions in the transportation sector is largely the result of more pickup trucks and SUV's on the road. It's time for governments (federal, provincial and municipal) to educate and inform people about the negative effects of their consumer choices. Maybe we need another oil crisis like in 1973.