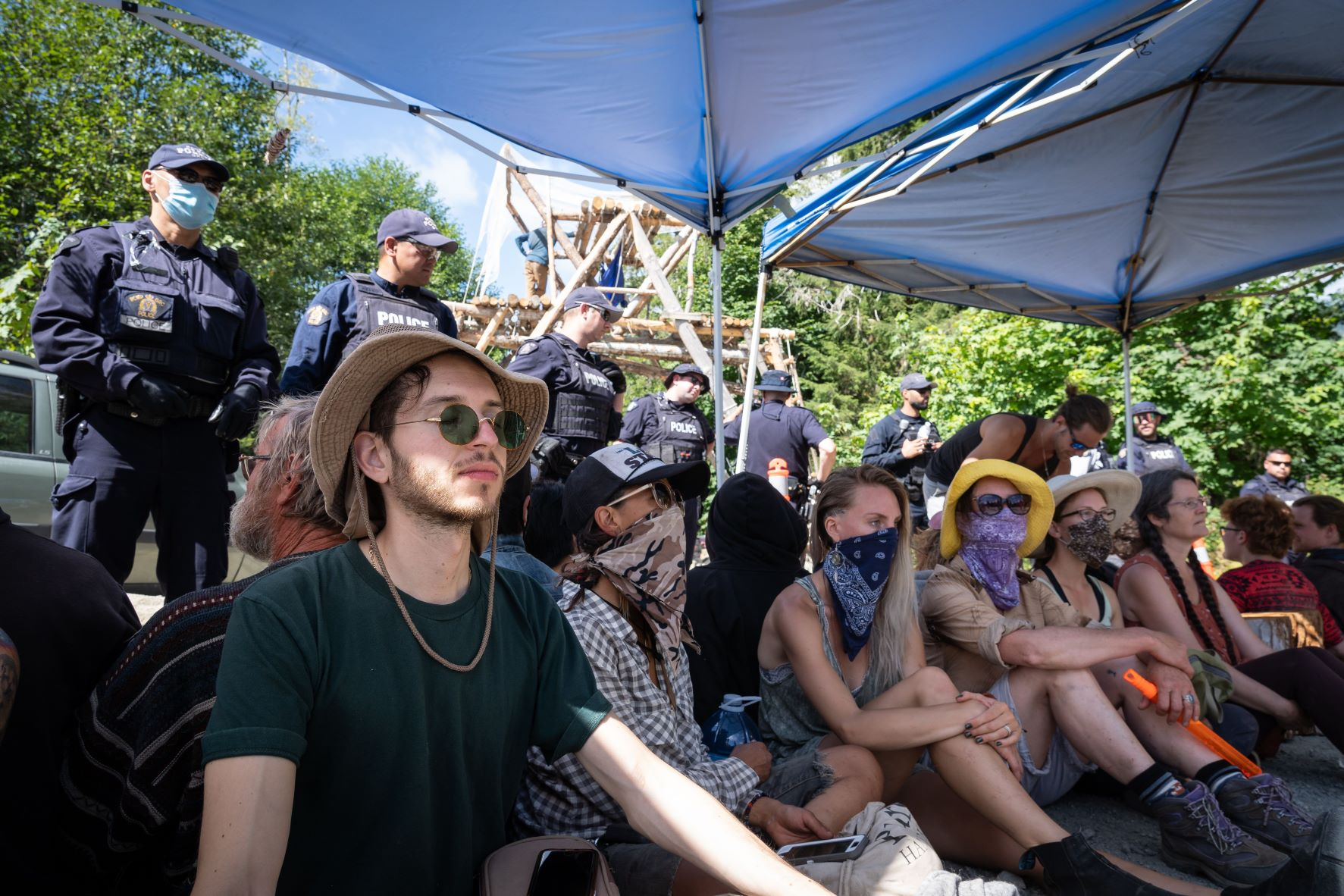 “He needs medical attention!” cries out one Fairy Creek protester looking at another lying on the ground. An RCMP medic glances down at the injured man and says, “He’s fine. He’s a grown man. He just fell down.” Health-care professionals on the scene say the protester was pushed twice before he fell. Another RCMP officer stops yanking another forest protector’s arm and tells her, “You can take him down for help yourselves.” That proved impossible as the police had taken their car keys.

Much to my surprise, I am a potential arrestee and witness to the largest RCMP offensive I have ever seen. I came to the Fairy Creek old-growth logging blockade Sunday evening to get a long-awaited interview for my weekly Canada’s National Observer series. I was here to profile a young Indigenous land defender. Her story is heartbreaking and compelling. Like everything else today at Fairy Creek, it will have to wait.

After I chatted with “Rainbow Eyes” on Sunday evening, my husband, a UBC professor, and I, and our tiny dog Biscuit decided to stay overnight. We are both in our late 60s, and rather than drive the winding dark road for three hours back to Victoria, we camped at the large gravel pit area with about 100 other vehicles. Although police have arrested more than 500 people between the eight other camps that have existed at some point around the Fairy Creek headwaters, they had never raided the HQ — until now. The camp is well-organized, calm, peaceful and very quiet.

We had planned to leave at 6 a.m., but our alarm didn't go off. At 8 a.m., we were woken by shouts from campers asking people to move their cars to form barriers against the 30 or so RCMP attempting to rapidly advance into various parts of HQ — the first-aid tent, the kitchen area, the media tent, river access, the sacred circle. Our exit was now blocked by a long line of RCMP vehicles and police wagons and the many young people sitting down on the front line at the feet of the police, or locked into various contraptions on the road or on tripods above it to slow their advance.

This is a leaderless community, yet it is full of leaders. As soon as the RCMP appeared at the HQ gates, a line of young people, many of whom are Indigenous, formed a barrier in front of cars that had been hurriedly moved into place to block access. About 20 of them sat down. As they get arrested, others take their place.

Watching an arrest is soul singeing. The large male police officers put their hands on a young protester, many of whom are obviously Indigenous or people of colour. They go limp. The specially trained RCMP officers, referred to here as “the Green Guys,” pick them up, put them on a tarp and drag them down the rough dirt road. The remaining protesters send their companions on their way with singing and drumming and spoken words of love for both them and the police.

Some of the arrests are probably illegal. I watched a group of officers step several metres across their own exclusion line to grab a young woman who was not a part of the row of seated defenders and was simply speaking into a radio.

This made me nervous. I am not here to obstruct anything. But the RCMP have blocked my exit.

The young people on the front line dance and sing under the hot sun.

At this time, no one knows where or how this ends.

the grotesqueness of this

the grotesqueness of this continuing on the eve of the IPRC report saying we must stop extraction, begin regeneration, save the biodiversity of old life forms, cannot be overstated. Time to change from destruction of life systems is NOW, not next year and certainly not next century.
The province is on fire, and the NDP shame on them, just keep going with the madness of massive fossil projects, flooding farmland with sure-to- rupture mega damns, and signing leases to rip and strip the province.
what will make our corrupt politicians start governing for the good of all and not a few coprs and elites? I dont have an answer.
Putting bodies on the line, brave. Media, not just alt media must get the news out to all who will listen. is people power the only thing we have?

Are we not allowed to protest

Are we not allowed to protest? The "protestors", according to this report, were not endangering property or people and were reported as well behaved. What have we become? We are arresting people, forcibly for doing what EXACTLY? Does the present government of BC support these arrests? HMMMMMMMMMMMM.....

I support these protesters

I support these protesters intellectually, ethically and emotionally.

And I have supported them financially.

And so should we all.

IMO, this is another instance of police forces being used to advance corporate interests, and impeding true social and human justice.