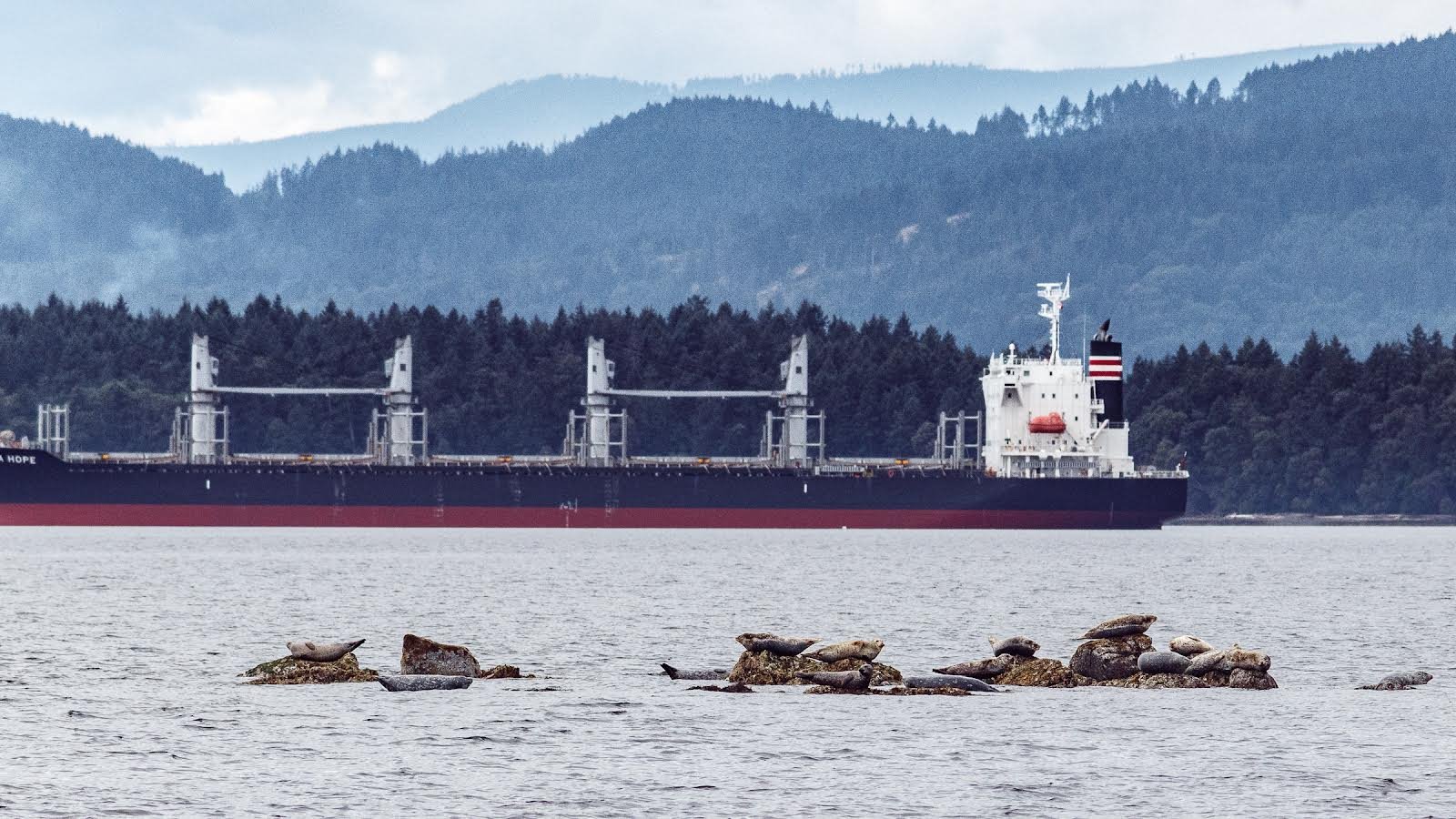 Since the 1970s, the freighter anchorages have been designated as free spots for ships waiting for room to open at the Port of Vancouver dock. Photo courtesy of Eye on the Environment: Photography by Laurie MacBride
Previous story
Next story

The waters of the southern Gulf Islands should be home to killer whales, not freighters waiting for space at Vancouver’s port, a new letter to the federal Ministry of Transport says.

Since the 1970s, the freighter anchorages have been designated as free spots for ships waiting for room to open at the Port of Vancouver. In a letter to Transport Minister Omar Alghabra, Green Party MP Paul Manly asked for an overhaul of the system, saying the way freighters now anchor is a “failure,” and a vessel arrival system (VAS) should be put in place to help.

The joint letter, released Aug. 6, was co-signed by numerous island leaders, including Elizabeth May and Chief Roxanne Harris of Stz'uminus First Nation. The anchorages disrupt residents and nations in the area, impact the environment and hurt Canadian grain farmers, the signatories say.

It is key to have freighters spend less time in the Salish Sea, says the letter. A reduction of just two days of anchorage per ship would have a big impact — a 2020 report from the Centre for Marine Affairs says it would mean 3,000 less anchorage days per year in the waters.

The same report says the current system costs Canadian grain farmers up to $28 million per year due to their products sitting idle as ships wait to be loaded at the Port of Vancouver.

An important point from the letter is about the history of the anchorages, and the lack of consultation with Indigenous nations when they were first implemented, says Harris. She says cutting back and eventually eliminating the anchorages is an essential move towards reconciliation.

“This is threatening to our livelihood, our traditional way of being. And so our elders have instructed us to (say) this is not OK,” she said about the environmental threats the freighters bring.

Currently, 33 anchorage sites — where boats wait to offload coal, grain and other materials — exist in the waters around the Gulf Islands. But the federal government is now considering designating five additional locations. It’s concerning not only for people along the shore, but marine life, whose habitat is damaged by anchor lines dragging along the ocean floor, says Manly. He’s also concerned about the impacts the mostly international ships have on local farmers.

“Grain farmers have enough problems getting by. You can have a bad season — just look at what's happening this year ... there's enough problems with financial uncertainty with farming without having to pay shipping companies to set an anchor where they’re not wanted,” said Manly.

Newcastle in Australia has put in a VAS system, says Green MP Paul Manly, which has caused two-thirds of vessels not to anchor at all, and dropped the anchor time of those staying from 11 to three days. #Whales #GulfIslands

The letter suggests an alternative: The implementation of a VAS, which would organize and schedule ships planning to dock. Ships would need to contact the port 14 days before arrival, allowing the port to tell the vessel how long it should take to reach the area.

Newcastle in Australia has put in a VAS system, says Manly, which has caused two-thirds of vessels not to anchor at all, and dropped the anchor time of those staying from 11 to three days. On May 11, he tabled a motion, M-85, calling on the government to put in the system, which he says is urgently needed before a “disaster” hits the coast. Last March, Manly says the area came close when a freighter dragged its anchor and crashed into another vessel, luckily avoiding a fuel spill from the bunker.

“The beauty of slowing down is that it saves the shipping companies money because they're burning less bunker fuel. They're emitting less, putting less greenhouse gas emissions into the atmosphere. And then they're not burning diesel while they sit and anchor,” said Manly.

“... The container ships are all on an adjusted time system, so you don't see container ships hanging around at anchor. They come steaming into port, and they're all ready to go. And it's run like clockwork. And so there's no excuse not to be doing the same thing.”

This story has been corrected to reflect that ships backing up at the Port of Vancouver are waiting to be loaded.